I’ve never considered my work as either sculpture or
installation, it’s not what I’m interested in (…). I always say
to myself that I’m ‘in-between’, I prefer this
floating category, I’m in-between architecture and sculpture,
or in-between architecture and the environment. [1]
[1] Interview with Frederic Migayrou in Kawamata, catalogue, Atelier
Calder, Orléans; CCC, Tours, 1994, p. 112
In Tadashi Kawamata’s studio, you will find paper cutouts alongside
maquettes, constructions made out of cardboard together with
scavenged objects. Kawamata works alone on his maquettes, and if his
spectacular and monumental interventions are conceived in a spirit of
participation, this initial period of introspection is just as important in his
work as the later stage of construction. He works with immense
concentration, tirelessly searching for inspiration and meditation.
Kawamata always reserves a decisive part of the production process
for his maquettes, which he sees as veritable microcosms of the world,
of his world.
Freed from the bounds of rules and models, his maquettes are
nonetheless underpinned by the same mechanisms as produce his built
works. With their variations in scale and material, they illustrate his
methods, his systems for construction, the way he plays with assembling
forms from scrap materials. They also reflect his acute sense of the
ephemeral, his ongoing desire to transform existing pieces of
architecture, to dissolve the boundary between inside and outside,
between public and private. At once models for thought, tools for
exploration, and imaginary landscapes, the maquettes bring us into the
heart of his practice and show us his ideological and aesthetic
aspirations.
As tools for thought, they can intervene in the creative process and
permit the artist to understand or further develop his project. Favela
no. 1 attests to his fascination with the endless cycle of construction
and deconstruction in the favelas in Brazil. ‘The favelas, built and pulled
down, built and down again, are exactly what I try to capture in my
installations,’ he says. ‘They are really part of the fiber of the city, while
endlessly, organically propagating.’ With these little flat-roofed huts,
Kawamata created for Documenta 9 at Kassel a whole ghost town: a
People’s garden. A veritable spatial construction, the maquette, placed
on a table and seen from above, resembles a tool for scripting the real,
evoking past or coming experience. It brings out the incessant dialogues
and journeys taking place in Kawamata’s practice between the
maquette and the finished construction. The same is true of the
maquette for the Maison des squatters, which bears witness to the
structure—a veritable movement of horizontal expansion—that
Kawamata and his students assembled around a squat.

This ‘movement that creates another, and then another’ breathes
disorder into the order of the ready-built, and demonstrates in a
spectacular manner the artist’s refusal of all fixed situations.
Considerations about when a work is finished or unfinished enter into
none of his constructions; it is their potential for being acted upon and
acting upon the space that alone is allowed to determine how they
develop.
The maquette could also be the copy of a copy, the reproduction of an
imagined real. There is something mysterious about the Bruges Tree Huts,
these little houses in the air inviting you to escape from reality. Clearly,
each hut is also a poetic object, a short form, a suspended, architectural
haiku. They become sculptures without ever losing their character as
shelter, as hideaway.
Kawamata endlessly blurs the boundaries between the represented
object and the constructed object. He creates houses that look like
maquettes and maquettes that look like drawings. In their tangled play,
all of them attest to the complex and proliferating economy of his
studio work, but also to his back-and-forth between solitary and
collective making, between his imaginary world and real space. 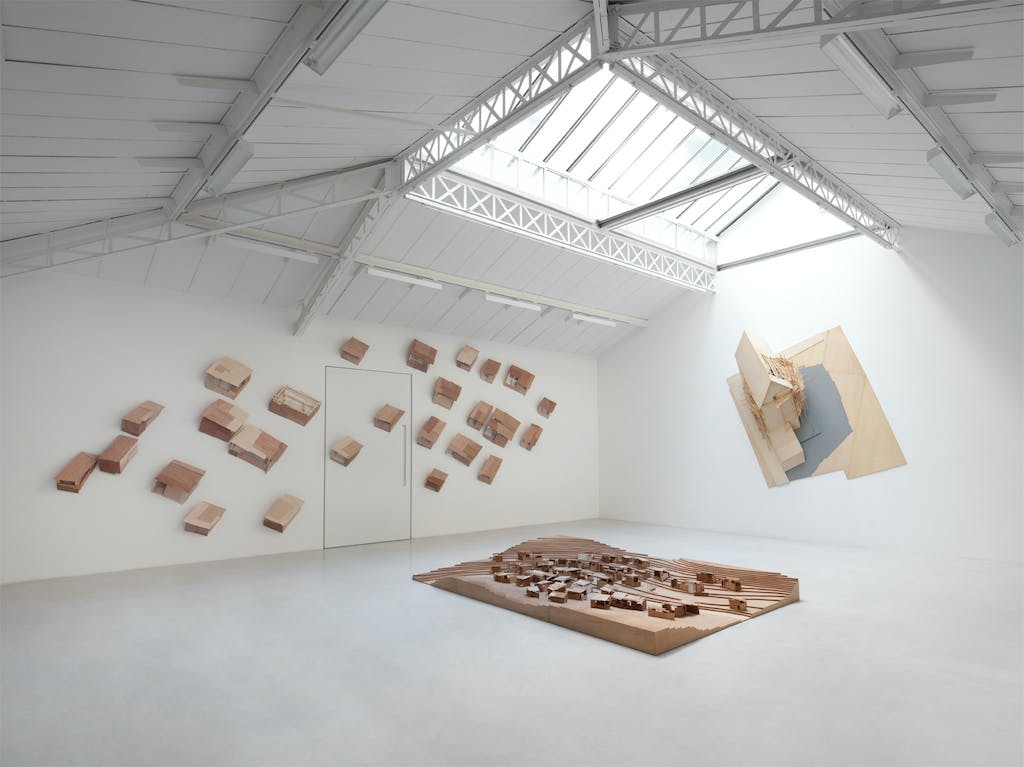 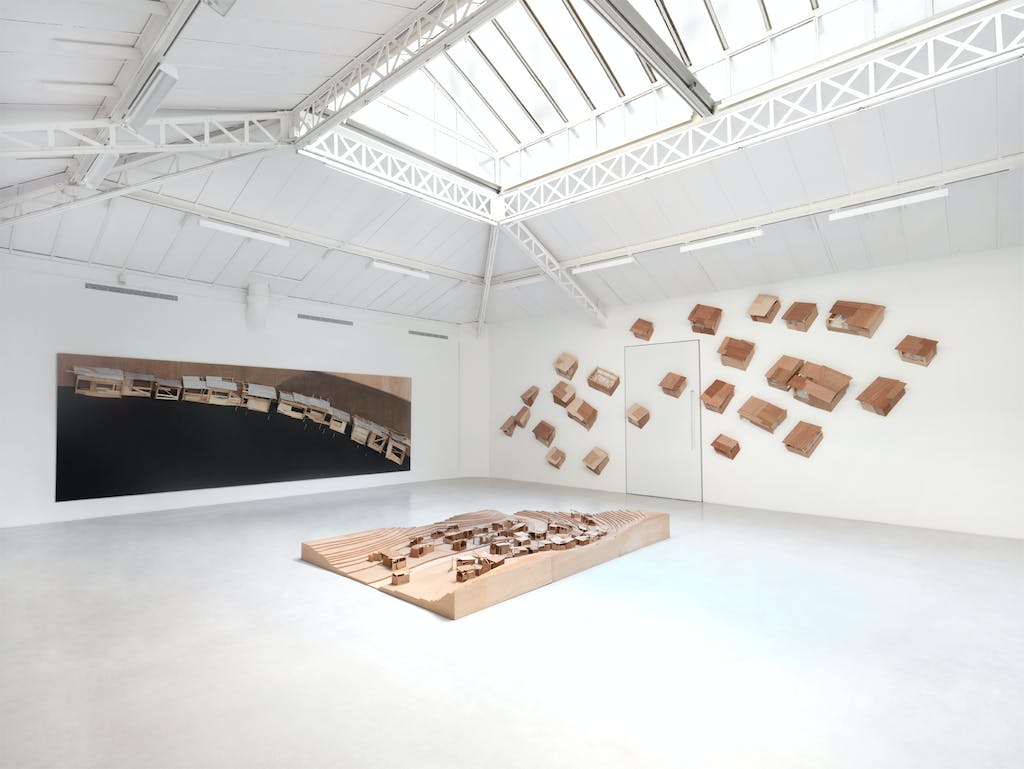 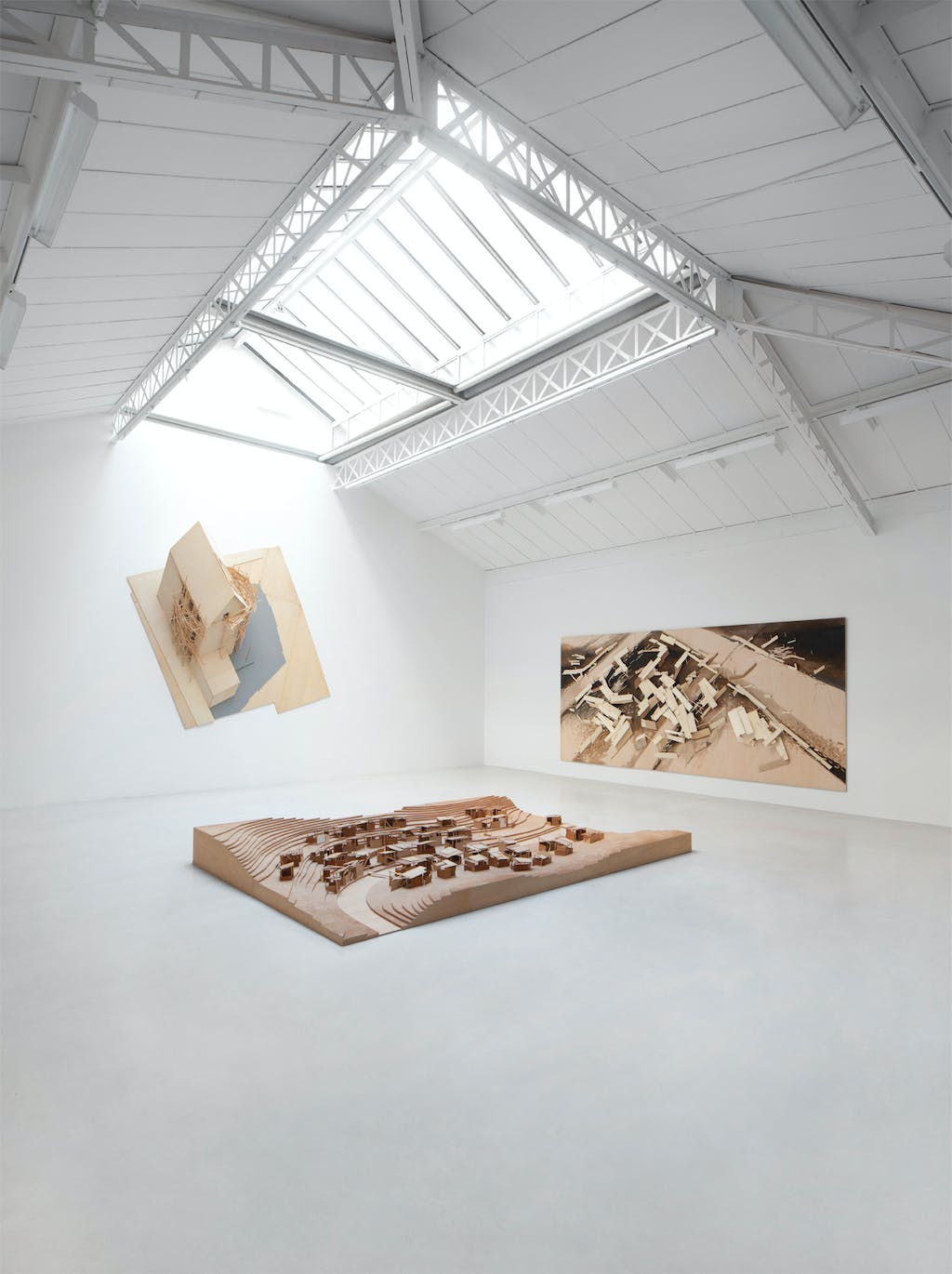 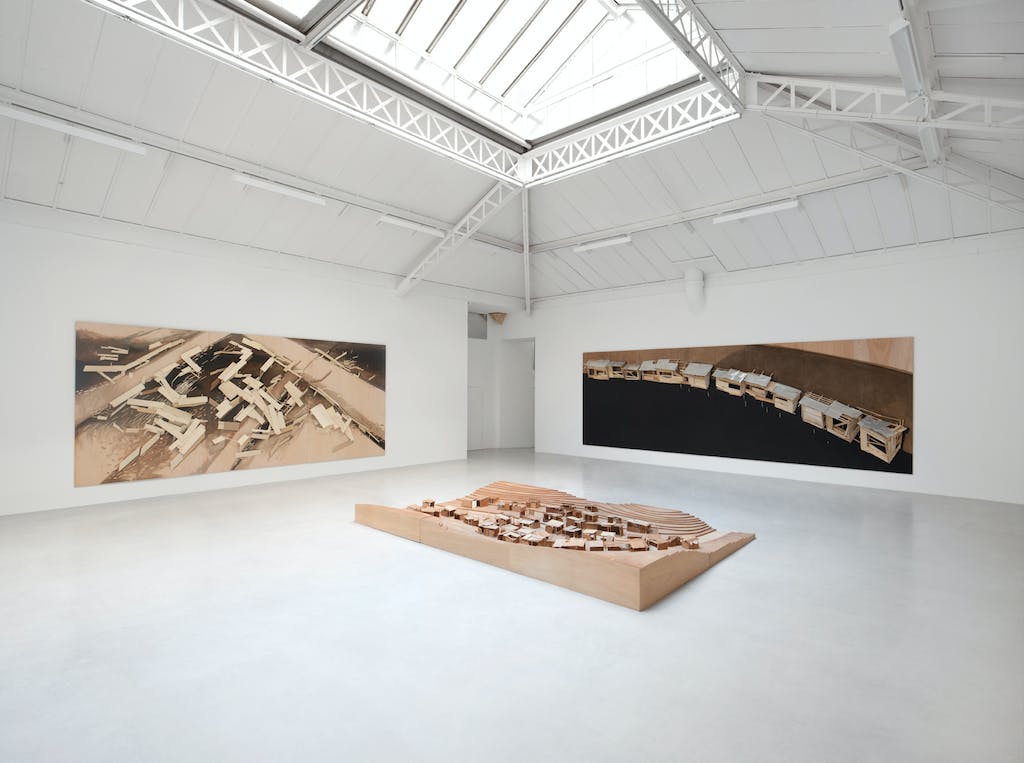 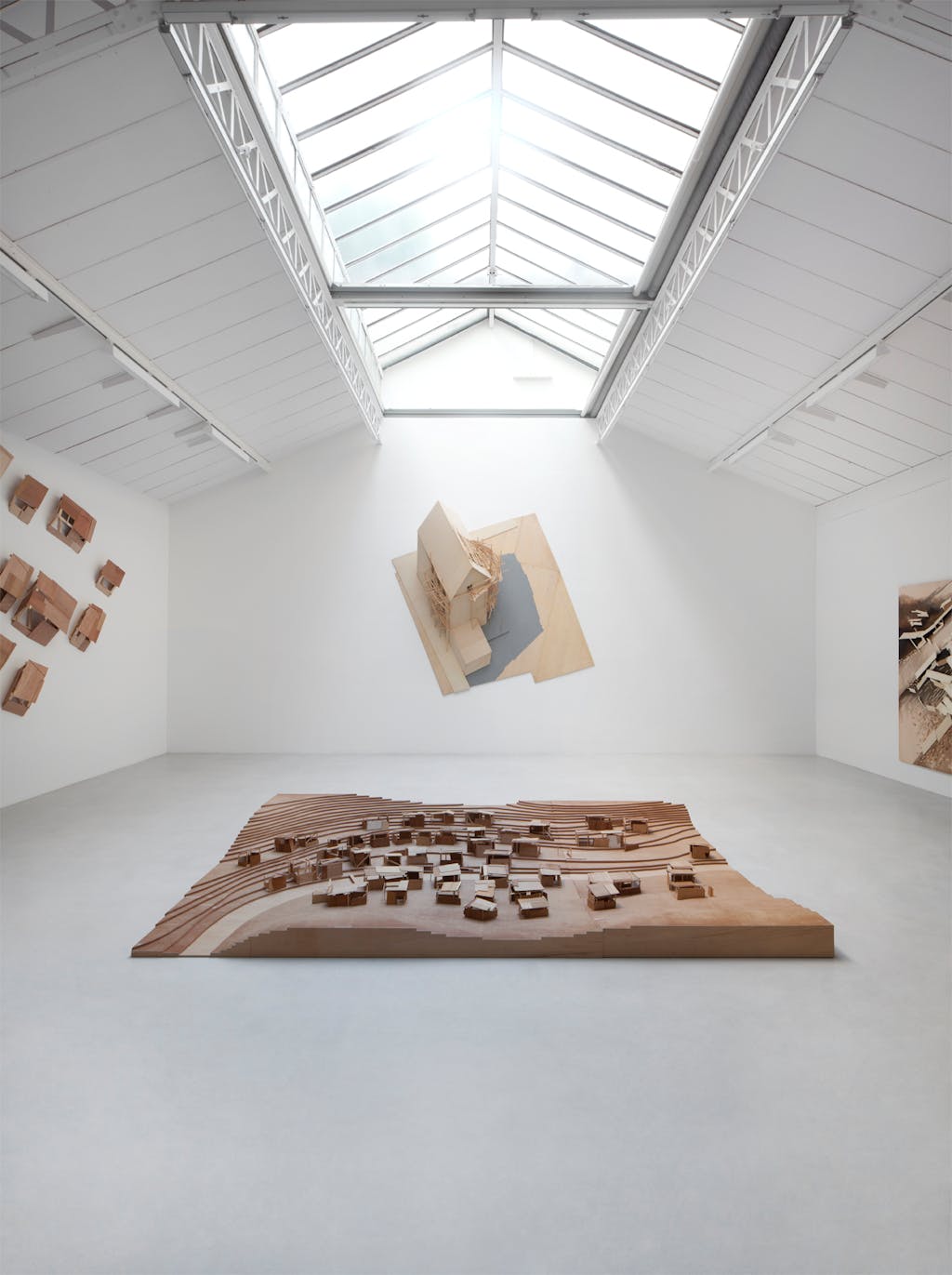 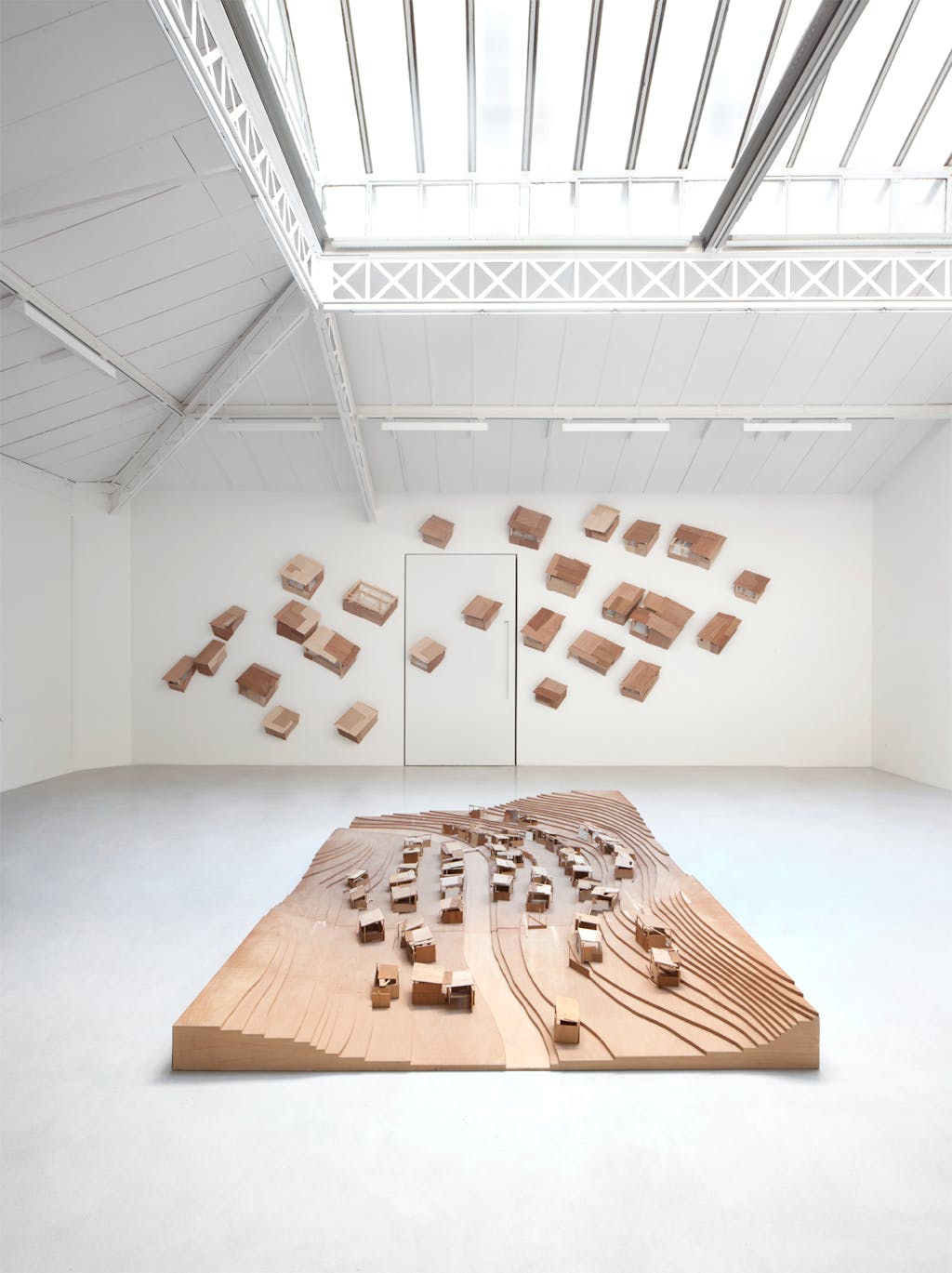 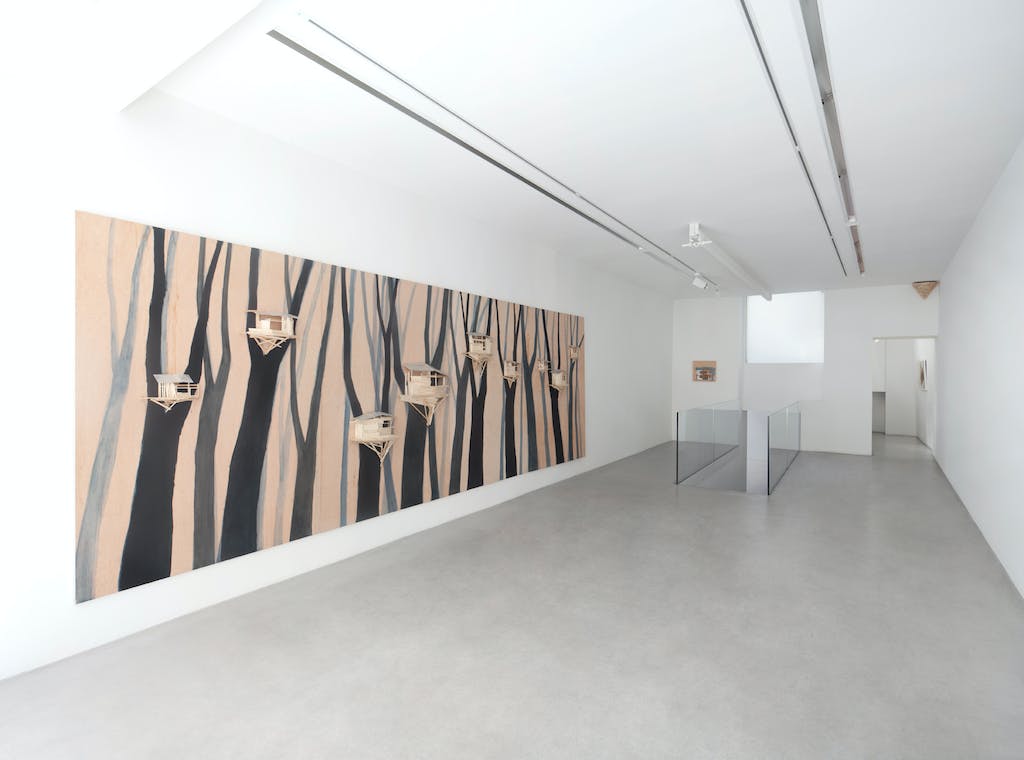