Born in 1953 on the Japanese island of Hokaido, Tadashi Kawamata is famous for his in situ interventions, assembled from, among other things, wooden planks, chairs and barrels. Whether built up into fragile, Babylonian constructions (Cathedral of chairs, the Pommery vineyard, 2007), or stretched out to form serpentine walkways (the Alkmaar Polders, 1997), his works offer, to those who climb up onto them or set foot on them, another point of view – in every sense – over the place in which they are situated (The Observatory in Lavau-sur-Loire in 2007, and in Evreux in 2000).

However, some of his more recent installations do not allow direct access to the visitor. For Art Basel 2007, the artist created a small wooden cabin wrapped around a giant pylon, in front of the building that houses the international art fair. Contrasting dramatically with the surrounding modernist buildings, it was a poetic and ironic statement. Reminiscent, simultaneously, of an archaic tribal hut, a homeless person’s precarious shelter and a dovecote, its position, perched up high, seemed an invitation to loftier thoughts. In what is, ultimately, the violent and competitive context of any contemporary art fair, the cabin placed its hypothetical Lilliputian inhabitants out of the reach of all predators. Evocative of childhood games, the cabin appears as a metaphor for an oblivious refuge that allows us to escape the world’s bustle and rediscover a certain inner peace.
For his first exhibition at Galerie Kamel Mennour, Tadashi Kawamata has chosen to fill the space with eight wooden huts. Four of them will occupy the gallery’s two main rooms, in a dialogue with an equal number dispersed in the main courtyard. Conceived as corbelled structures in the manner of hives or a swallow’s nests, they will have the appearance of so many grafts or cobbled together architectural prostheses; like cottages, which together form the village of a mysterious and invisible arboreal community.

In the autumn of 2008, Tadashi Kawamata will install a dozen Tree Huts in trees at New York’s Madison Square Park. At the same time, he will be erecting a monumental, perennial sculpture in front of the Cité nationale de l’histoire de l’immigration in Paris: a ramp linking the city directly to the building’s ceremonial hall.
His Observatory in Lavau-sur-Loire could be visited until 2009. 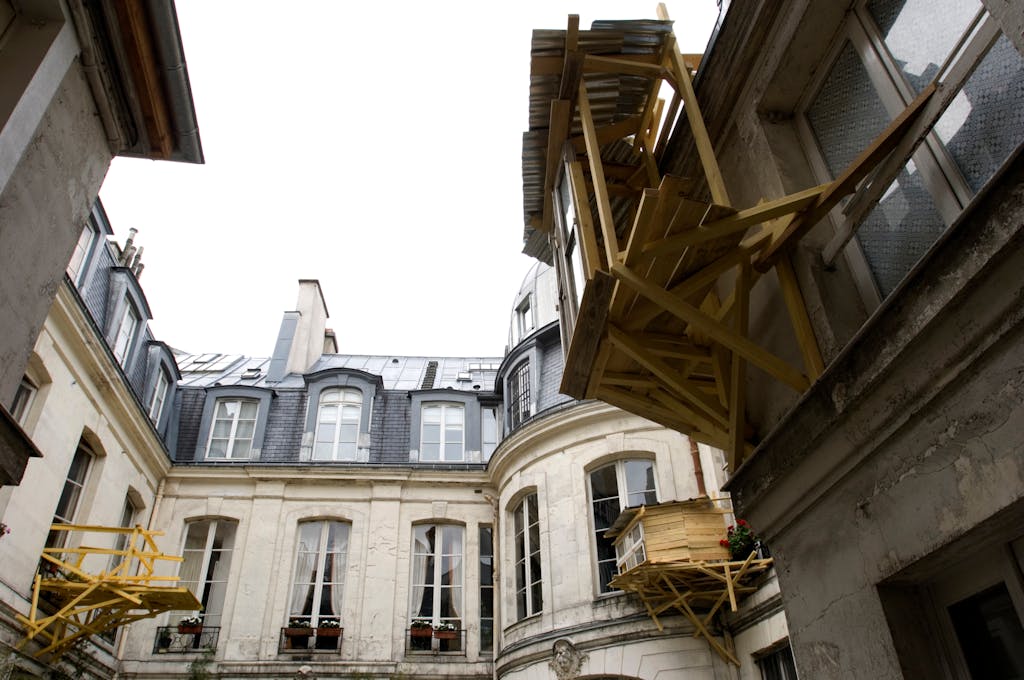 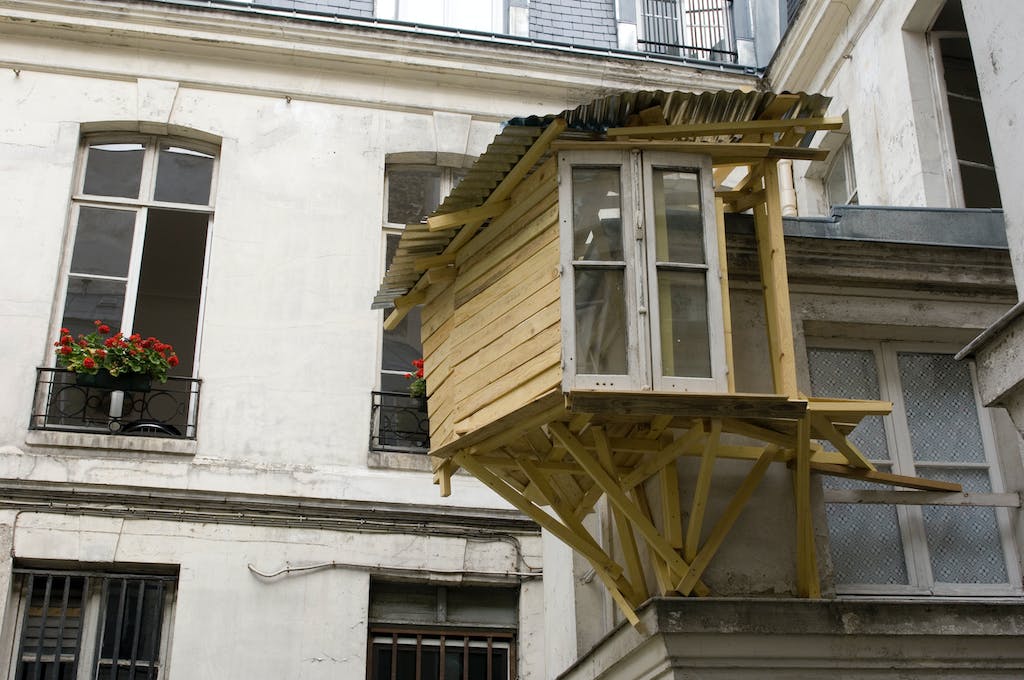 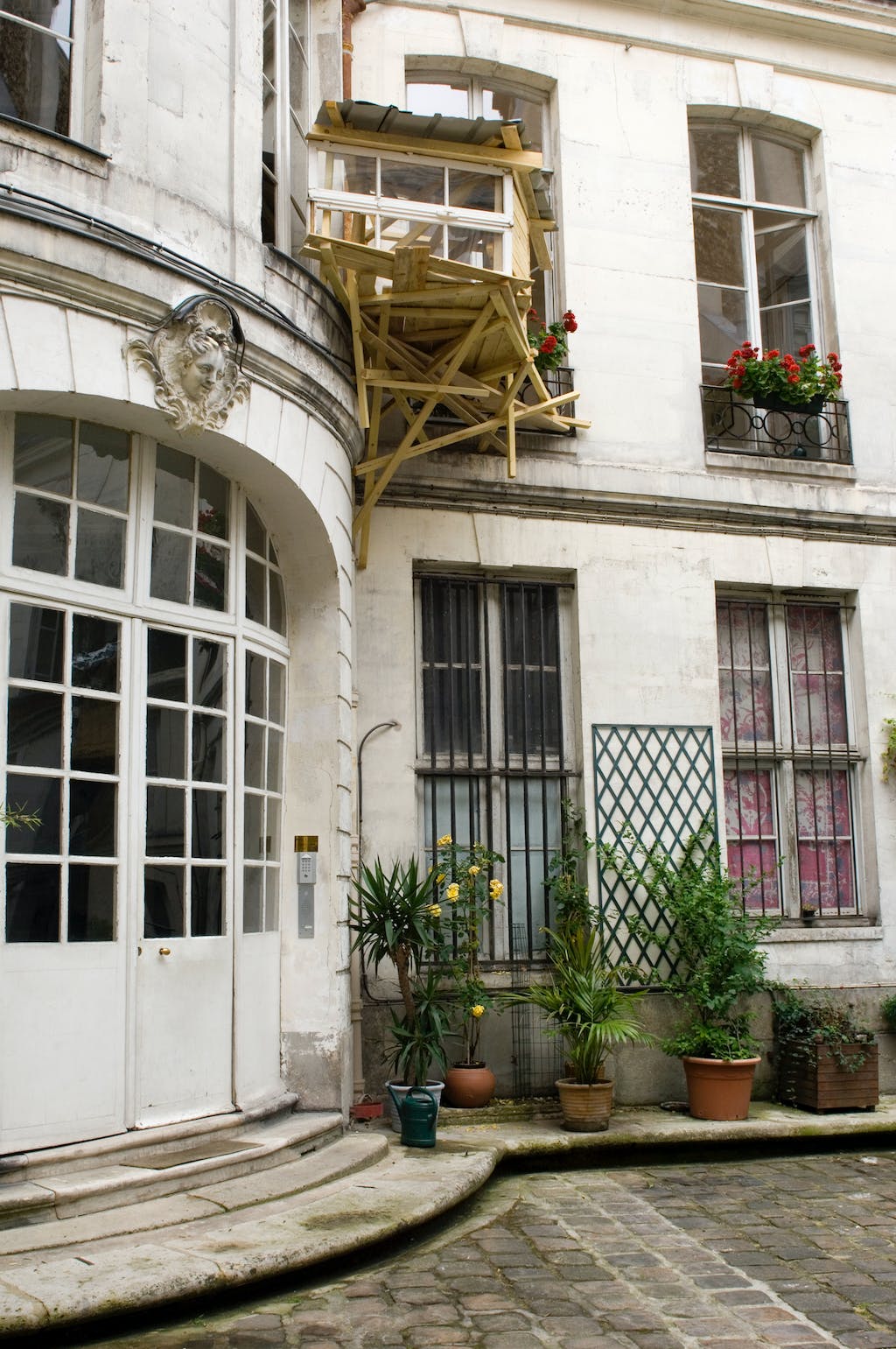 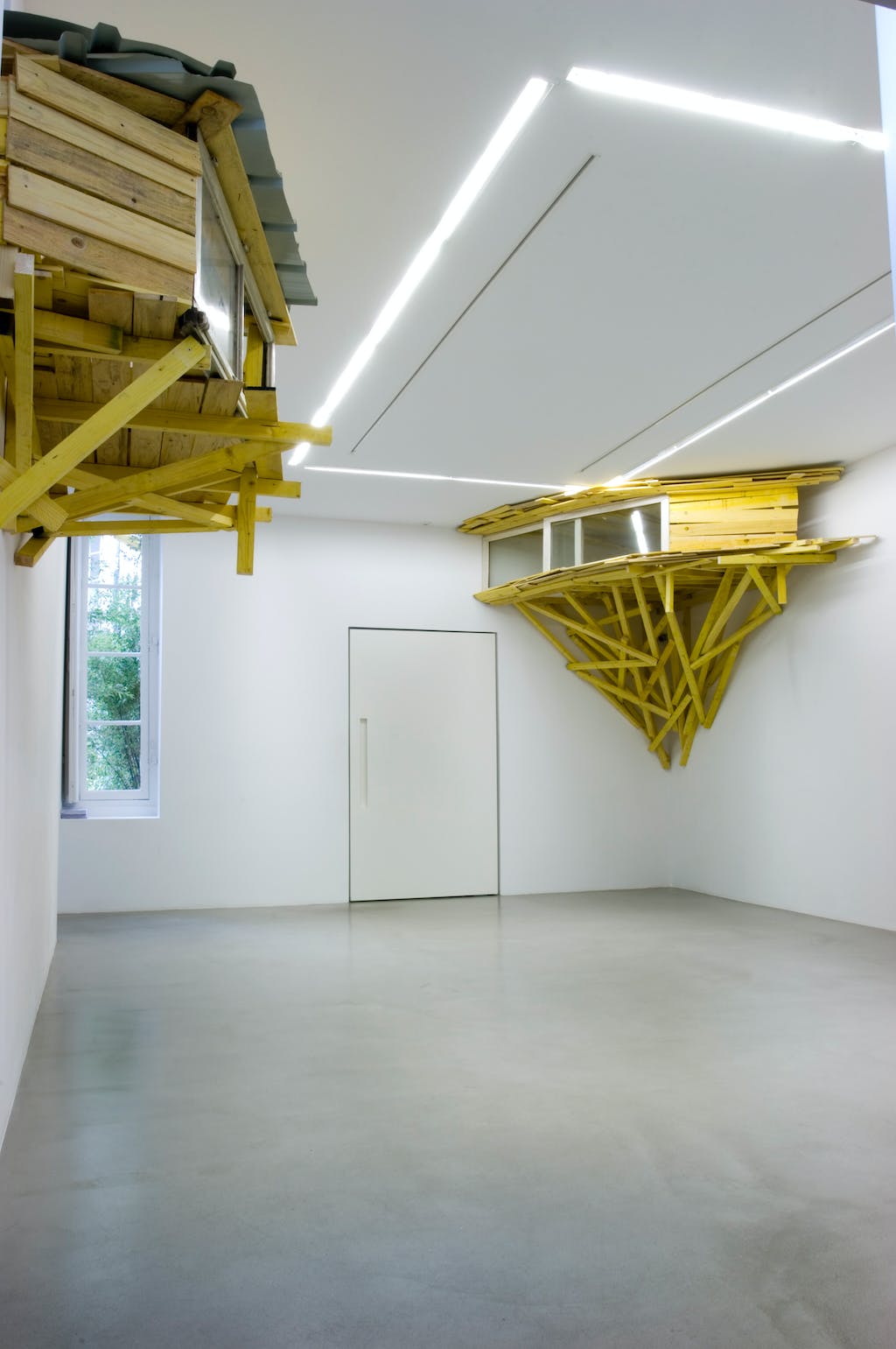 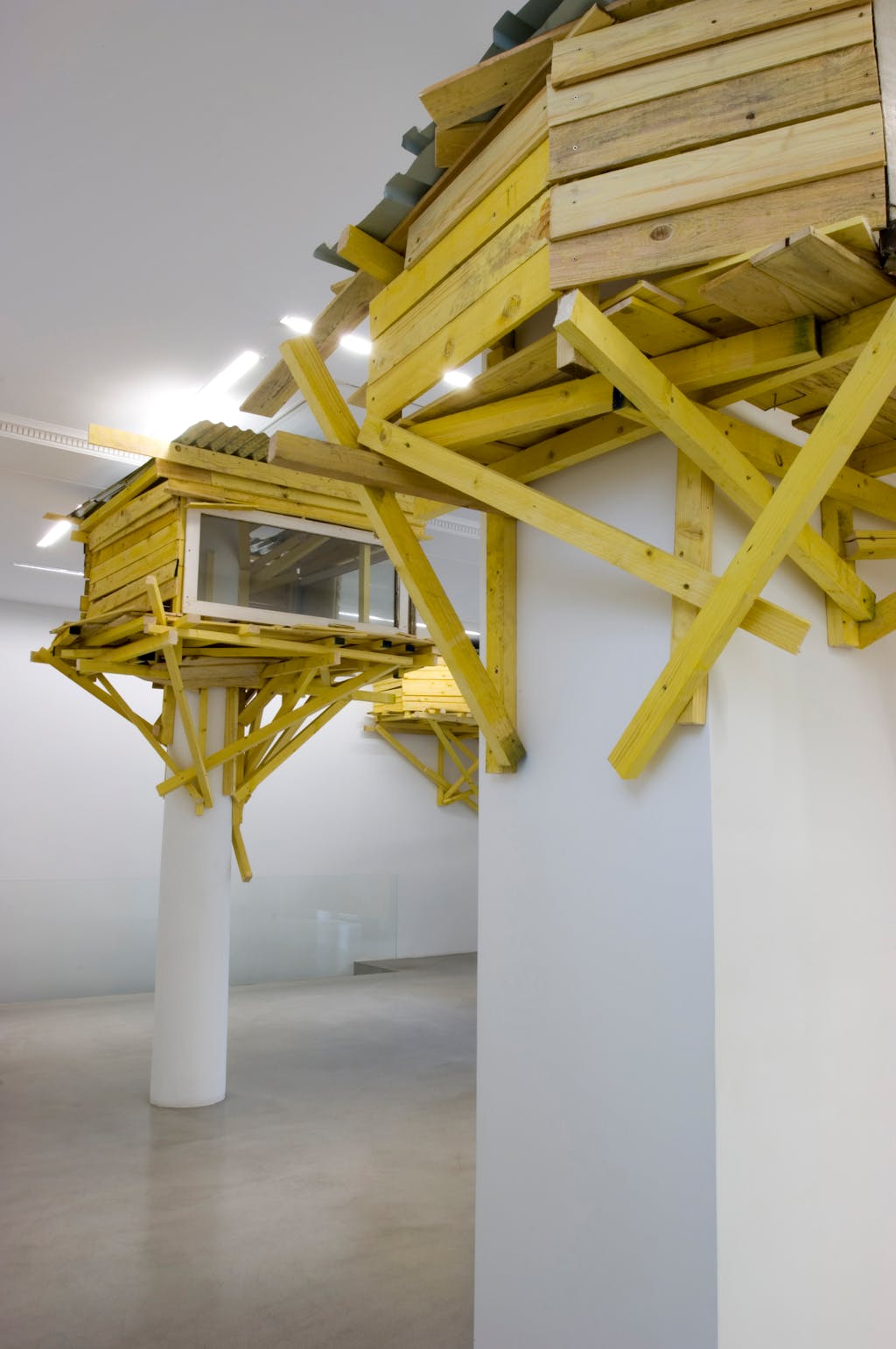 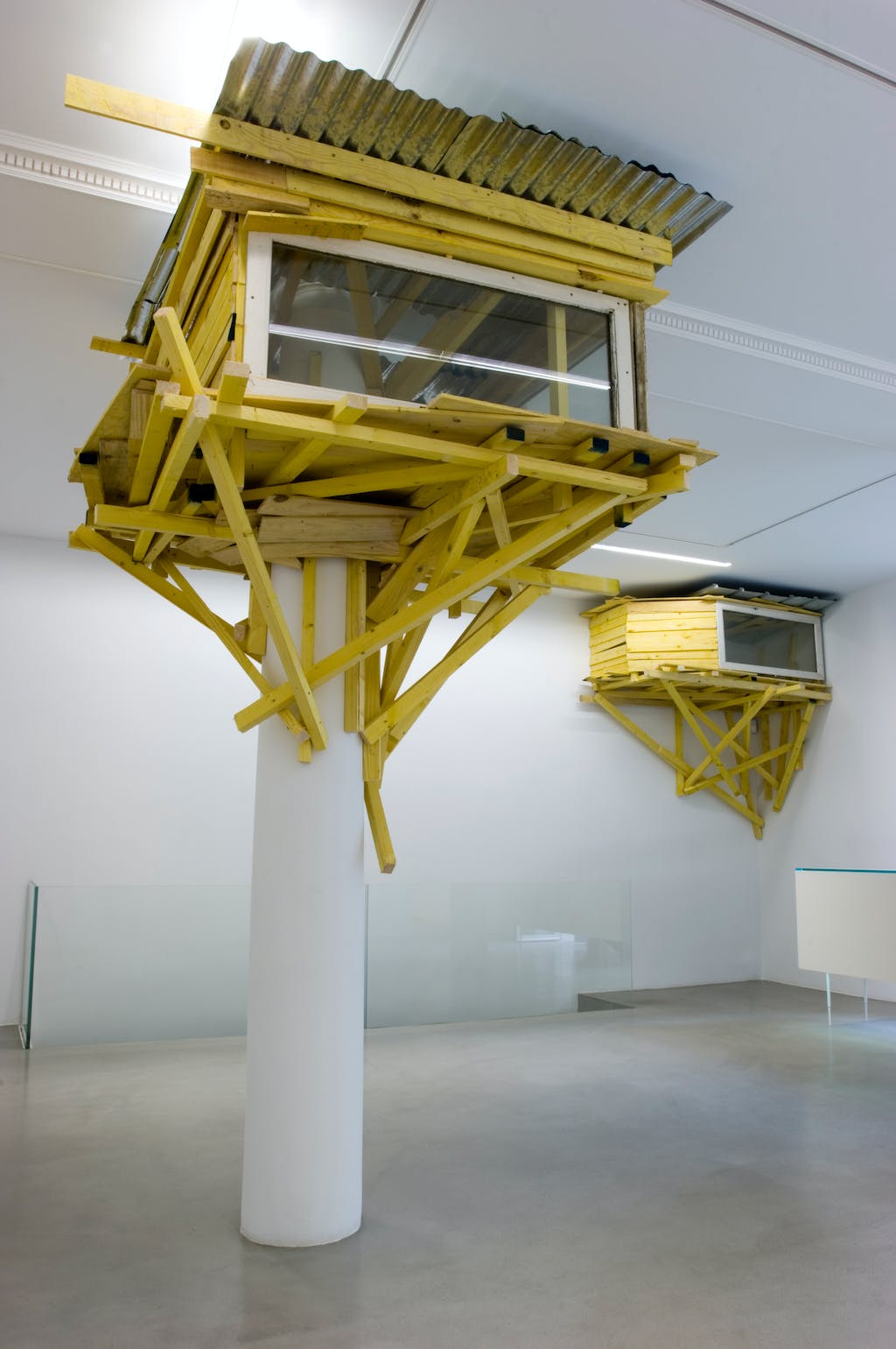