On the level of communication, Gina Pane’s work constitutes a remarkable success for language, a culmination of the environment, a masterpiece of applied ecology. […] On the eve of our great muta-tion, we must prepare ourselves for the revolutionary options of passage: the efficiency of our re-sponses depend on the clarity of our analyses. Questioning our most established values requires lucid investigators. And here we have one. Gina Pane undoubtedly has more than a word to say on all this, and I’m sure she will say them, when the time is right.
Pierre Restany, Paris, May 1970

Kamel Mennour is please to present for the third time an exhibition of the work of Gina Pane, a cen-tral figure of the artistic scene in France in the 1970s and 1980s.

Throughout her career, Gina Pane practiced with equal ease drawing, painting, lithography, sculpture, installation, ‘action’, and photography, using the latter in her ‘Constats d’actions’. She used a wide range of materials (sand, earth, wood, aluminum, copper, tin, felt, etc.), which she chose for their intrinsic qualities and their symbolic weight, together with a range of objects she collected or made herself, without forgetting of course the use she made of her own body, which she established as her princi-ple creative material and the instrument of the new language of body art.

The exhibition at the galerie kamel mennour (47 rue Saint-André-des-Arts) focuses on the first period of her production, particularly the end of the 1960s. This often under-recognised period precedes the highly symbolically charged, ritualised actions centred around wounding that she made in public be-tween 1971 and 1979, and her final sculptural productions, inspired by the lives of the martyrs, the Scores of 1980-1989.
The drawings, paintings, installations, sculptures, photographs, poems, and archival documents exhib-ited here (some of them for the first time) testify to the richness of the work of this visionary artist, an artist full of life. A body of work that continues in its different aspects to pose questions that are still relevant today.
Terre protégée [Protected Land] (a title that comes from a triptych of Pane’s) wishes to show Gina Pane’s politically engaged practice in relation to mother earth: an enchanted, nourishing, inhabited, protected, loved, remembered but also threatened, exploited, devastated, dirtied, polluted, drowned earth… A critical exploration at the crossroads of the poetic and the political, at once metaphysical and earthly, philosophical and social, somewhere between earth, water, and sky. A simple, direct dia-logue with reality, for ‘art is not longer a diversion from reality’, as Catherine Millet wrote in 1969.

Very early on, Gina Pane had an acute awareness of the fragility of our natural environment, of the irremediable transformation of the world and its landscapes caused by industrial development, urban sprawl, militarisation, and intensive agriculture. The preservation of the land and of the earth, which symbolise promises of life and hope, becomes one of the recurrent leitmotifs of her productions at the end of the 1960s. In her determination, Pane wanted to make her audience aware of ecological questions: air pollution, lack of green space, rising water levels and contamination, resource deple-tion, natural catastrophes, etc. The photograph Situation idéale : terre – artiste – ciel [Ideal situation : earth – artist –sky] (1969) could in this sense be read as the programme underlying her whole body of work: ‘Between two horizontals: earth/sky, I placed my body vertically in order to provoke an ideal situation.’ Her feet planted firmly on the ground, staring straight before her, Pane rises between the earthly world and the cosmos. According to her, the artist must always be an intermediary, a passeur, a catalyst towards concrete realisation. The artist must moreover be able to participate conceptually: ‘demand the raising of an area of land, the need for a water course, […] the need for a rising and fall-ing ground, etc., for […] there must be no rupture between the natural environment, the individual, and her creation.’

Before 1968, influenced by the vocabulary of suprematism, Gina Pane produced in her studio an im-portant series of drawings and paintings proposing simple and complex geometrical forms: round, triangular, polygonal forms caught up in the attempt to blend with the interior of the surface of the paper or the canvas. Layered and combined, they are painted in primary colours—the cool colours appearing to recede and the warm colours to advance in respect to the ground—with the aim of in-troducing a movement and a feeling of space (Room 1). But 2D was very soon not enough for Pane, who was tempted to extend her practice into sculpture with a strong minimalist bent. This is how Structure affirmés [Affirmed structures] came into being, so many large metallic prisms, often blue, reaching towards the sky. ‘Peinture – Sculpture primaires [Primary painting – sculpture] but penetra-ble/impenetrable, where the body would be considered in the very conception of the work by creat-ing spaces’, sculptures made by people for people, subtly playing with the idea of architecture and which are involved in life. ‘The aim of my investigations is to construct by concerning myself with eve-rything the environment gives,’ Pane wrote.

Amongst this series of investigations based on the problems of ecology, it is worth considering her first major work, Acqua alta/Pali/Venezia (1968-1970): a sculptural and environmental installation, formally linked to Structures primaires and reconstructed here for the exhibition (Room 2). Pane of-fers up here a very personal vision of an anguished Venice. ‘I chose to express this city, for, through the complexity of its problems, it symbolises the aspirations, the refusals of our civilisation[…] it is at once the symbol of anecdote as well as drama. Ecologists, urban planners, etc. have succeeded—by underlining the causes of “the death of Venice”—in raising consciousness of the precariousness of our current environment. Venice stricken strikes by turn, right into politics.’ In a pool of dirty water, a group of minimal posts—figuring the old Venetia piloti—rise towards the gallery ceiling. Made in Du-ralinox—‘a modern material that summons the coming contemporary technology’, writes Pierre Restany—the posts nonetheless tilt under weight of the threat that haunts the city of the Doges, a threat created by technological expansion and the too-rapid industrialisation of its ports. The struc-ture is accompanied by a commentary that invades the space: Acqua alta (a Venetian expression for high tide) takes up the entire floor, while the word pali spreads across the walls and the word Venezia is repeated on the ceiling like a litany, as if the city was struggling to keep its head above water before inevitably going under…

To go back to the beginning: July, 1968. Gina Pane is walking through the Orco valley around Turin when she sees a pile of stones placed on the shadowy side of the mountain. ‘Seeing a pile of stones, between 0.15 and 0.2 metres exposed to the north, covered in moss and set into the damp earth, made me realise that they never perceived a single sunray, never a ray of warmth. I decided to move them by taking them one after the other and putting them in an open, southern-facing place’ (Pierre déplacées). It was with this ‘first in vivo act’, this spontaneous drive to ‘right a wrong’, that Pane be-came conscious of the limit of her ‘pictorial and sculptural works. In nature,’ Danny Bloch writes, ‘she found problems of space that [seemed] to her more important to resolve than those posed by the surface of the canvas or the environment of a sculpture’.
On returning to Paris, she decided that the enclosed space of her studio would no longer be the only place of her work: nature would now be the catalyst her investigations. Using her body as an element of transmission (receiver/emitter), she undertook a series of in vivo actions, at times tender, at times protective, dangerous, or derisory (Room 3). Gestures that were often ‘very simple […], the beauty of which comes from their extreme fragility’, as Anne Tronche said, and whose end is to set up new pos-sibilities of communication between threatened nature and the people who inhabit it.
At the end of 1968, Gina Pane exhibited her triptych, Terre protégée. On a bed of arable earth in the Italian countryside, she set up 120 wooden structures tied together by hemp belts and orientated according to the points of the compass. Under each wooden structure (which make one think of life-belts), she placed a small packet of seeds in order to protect the richness of the earth—a theme that can also be seen in the installation Le Riz no. 1 (1970-1971), which is made up of a fragment of a rice paddy (rice, a universal food, acting for Pane as a link between the opposed ideologies of the capital-ist and socialist countries).
The following two parts would appear in 1970. For Terre protégée II, Pane lay down on the ground, her back to the earth, her arms crossed, to block aggressions, take possession of the space and estab-lish a link with the natural environment, while letting herself be absorbed by it. And for Terre proté-gée III, she made a circle of stones to protect the eponymous inscription sculpted in the ground.
In July 1969, in Écos (Eure), ‘on a stretch of arable land, [she buried] a ray of sun in the earth with the help of mirrors’ (Enfoncement d’un rayon de soleil).
In December 1969, near Turin, she threw four drawings into the current of the Chisone, hoping that the water would carry them to the sea (J’ai jeté 4 dessins dans le torrent Chisone (Turin) destination mer. Acte raisonnable, ennuyeux, autocritique [I threw 4 drawings into the current of the Chisone (Tu-rin), destination: the sea. Reasonable, boring, autocritical act].
In October 1970 in Ury (Seine-et-Marne), she accomplished the vertiginous act of scaling the wall of a sand pit, an extraordinary effort that pushed her to experience her limits. She would say: ‘The walls of sand were terribly high […], I knew there was a danger of a landslide, it was a perceptible danger, I could physically feel it.’ The silence that fills the pit is experienced as a necessary condition for a more intense relationship with nature—in this case menacing (Deuxième projet pour le silence [Second pro-ject for silence]).
In November 1970, again in Ury, she extended a rural byway with wooden planks in order to try to establish new possibilities of communication (Continuation d’un chemin de bois pour aller d’un lieu à un autre dans le but d’une quelconque communication [Continuation of a wooden path in order to go from one place to another with the aim of making any kind of communication]). Finally, if the 1969 work Stripe Rake (Room 1), which pays homage to Kasimir Malevich’s black square, can no longer be handled, it was initially placed in order for the viewers to use it. They were invited to inscribe traces with this rake made by the artist, to link together the desert sand—dead matter where nothing grows—and earth—living matter, a symbol of future crops.

However poetic these actions and works can appear, it must not be forgotten that most of them emerged from a desire to manifest a despair, a justified anger at the future of the planet, a desire to communicate with the spectator (communicate in the sense of warn, but also communicate with, meet), to provoke a surge in consciousness. Gina Pane would write in 1974, in Lettre à un(e) incon-nu(e): ‘It is to YOU I am speaking because you are the “unity” of my work: THE OTHER.’ 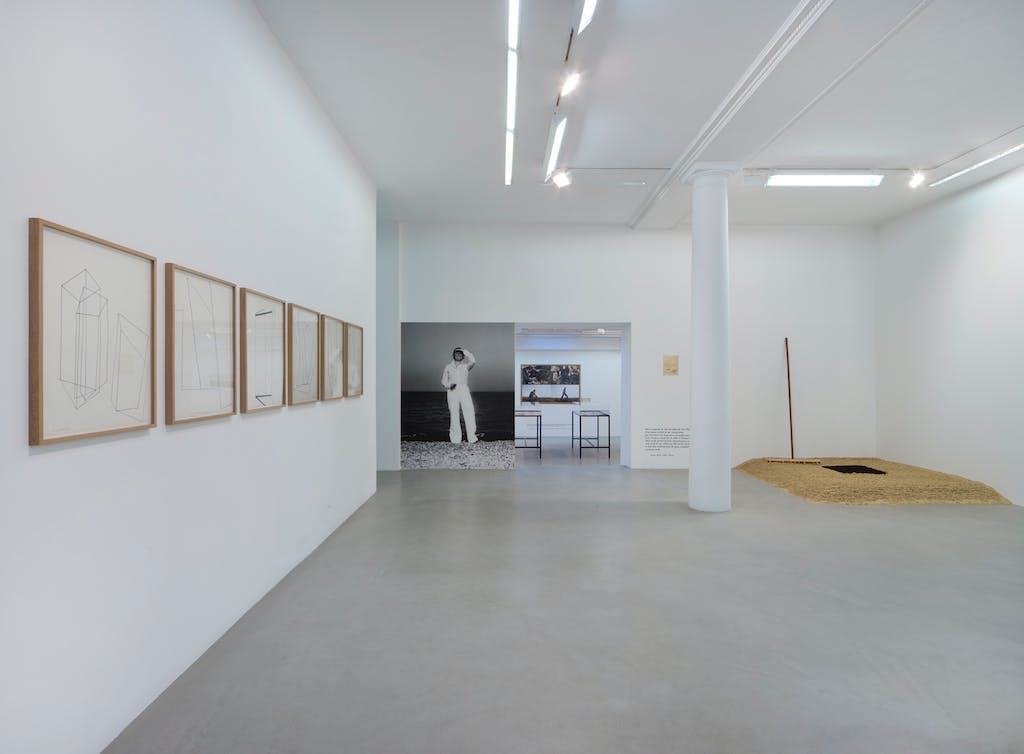 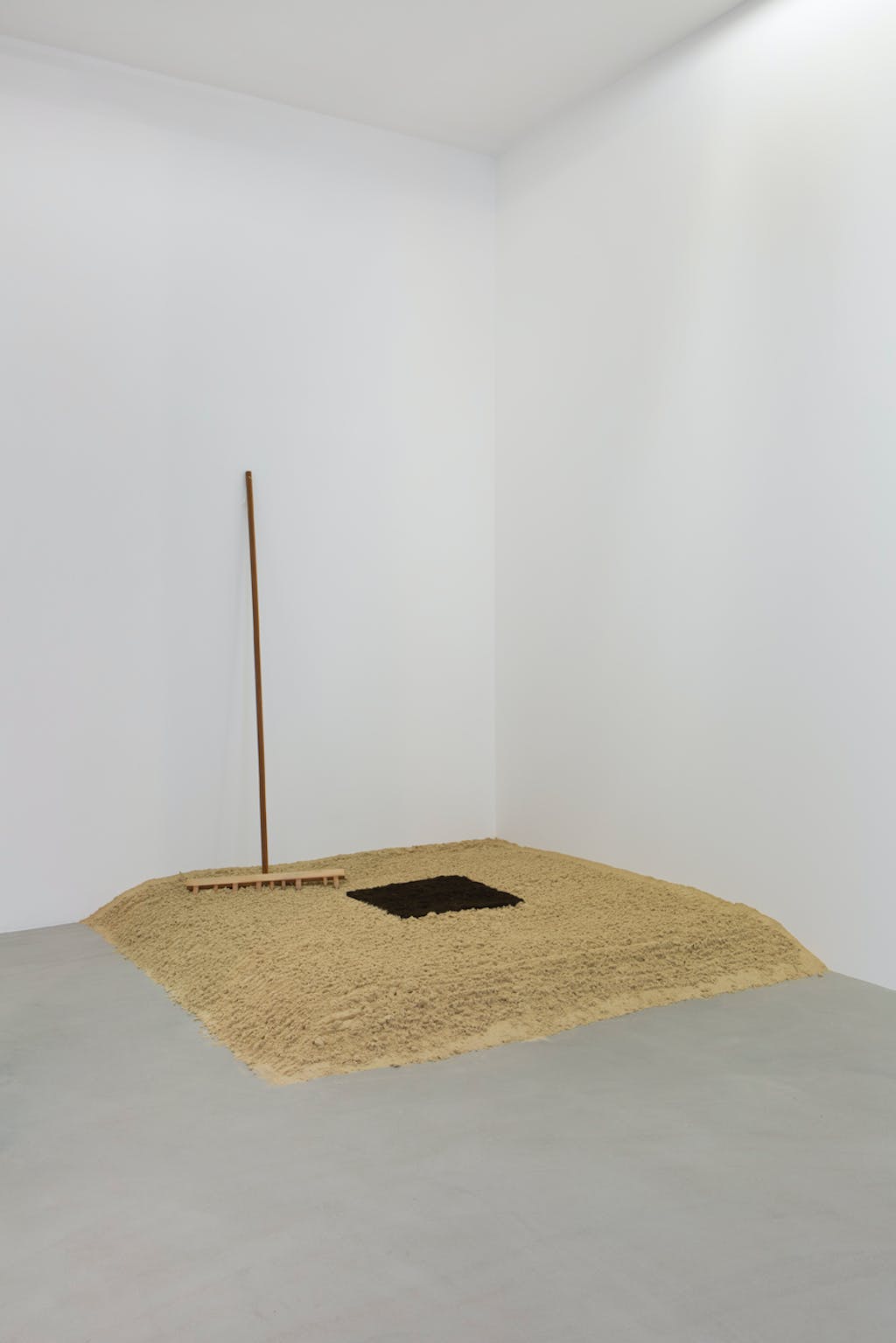 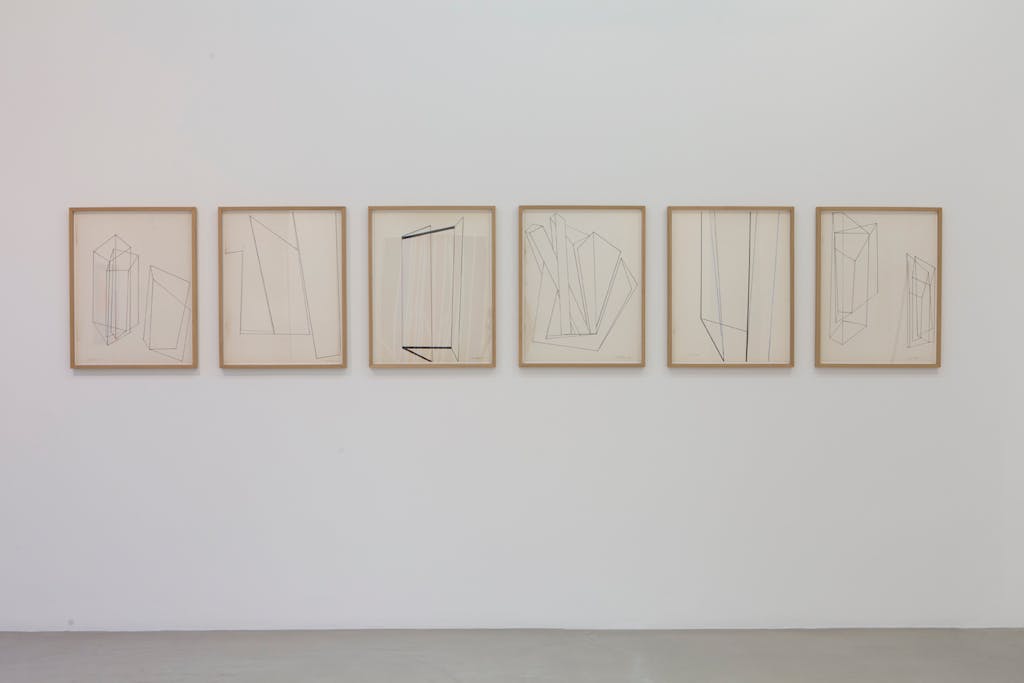 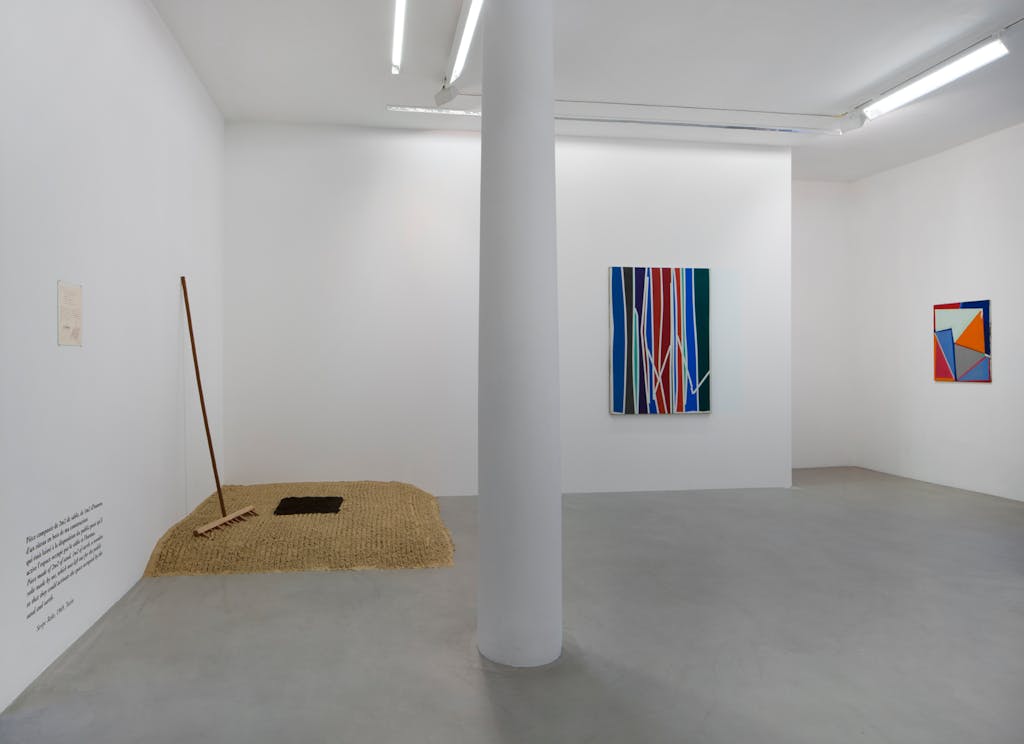 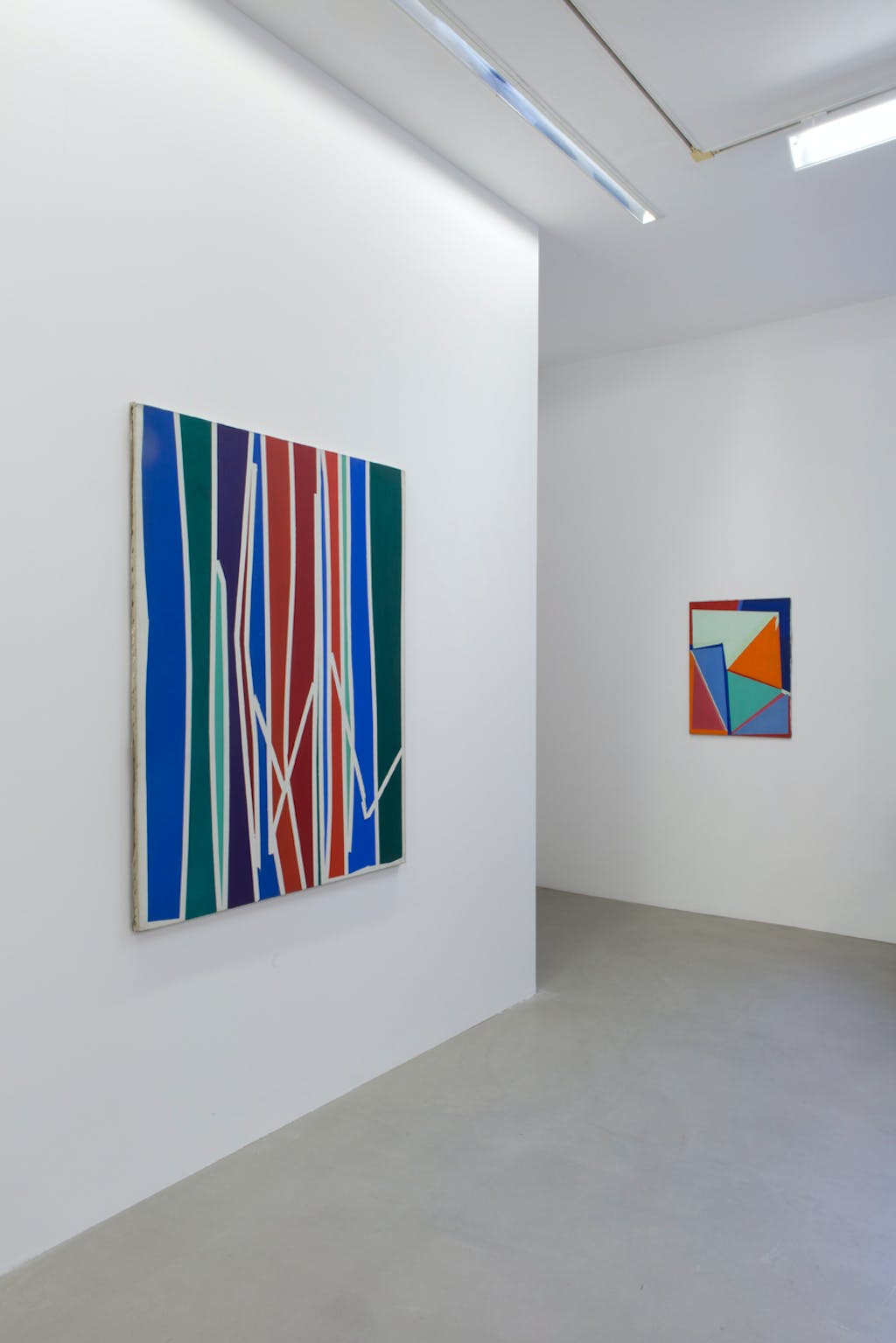 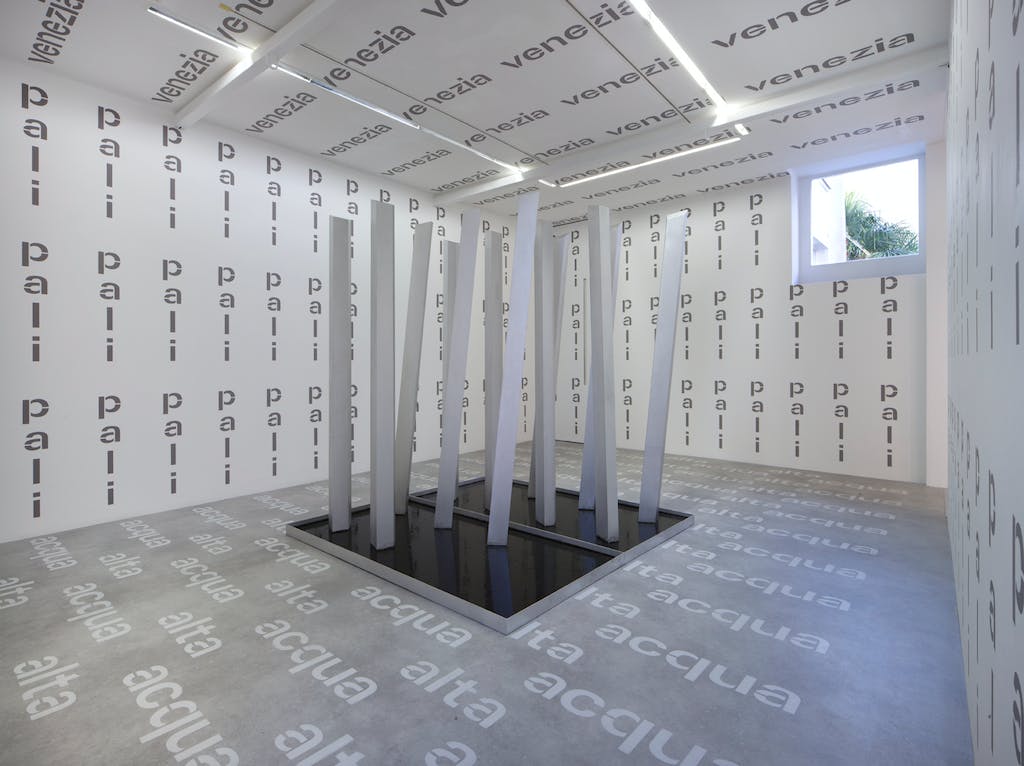 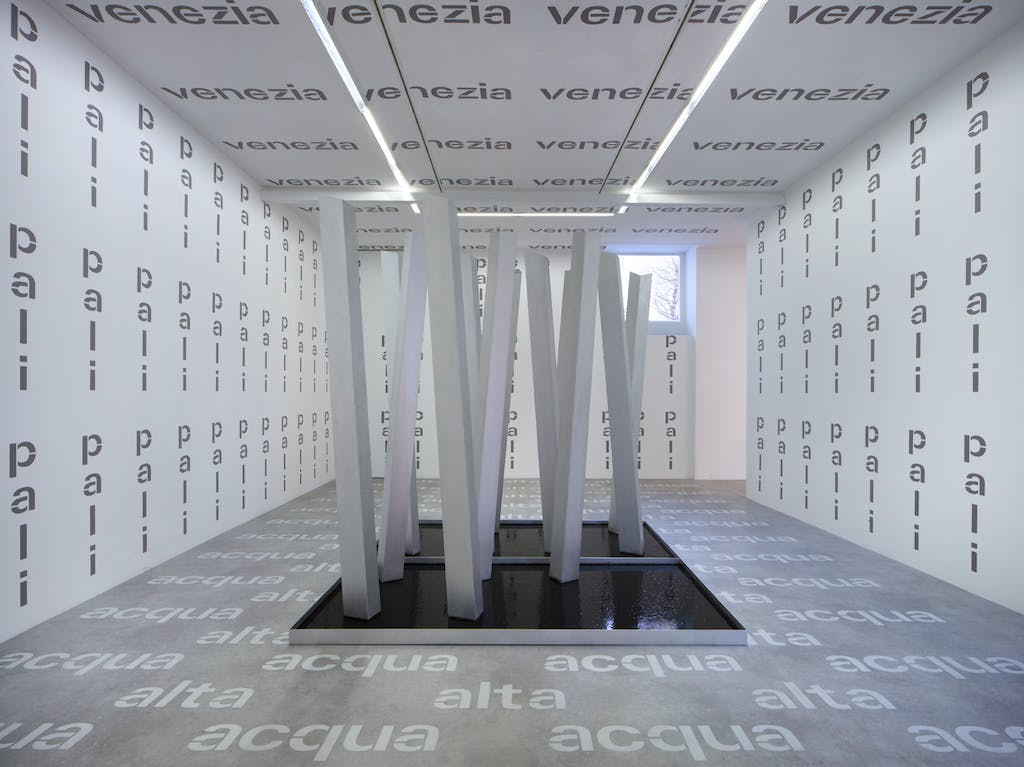 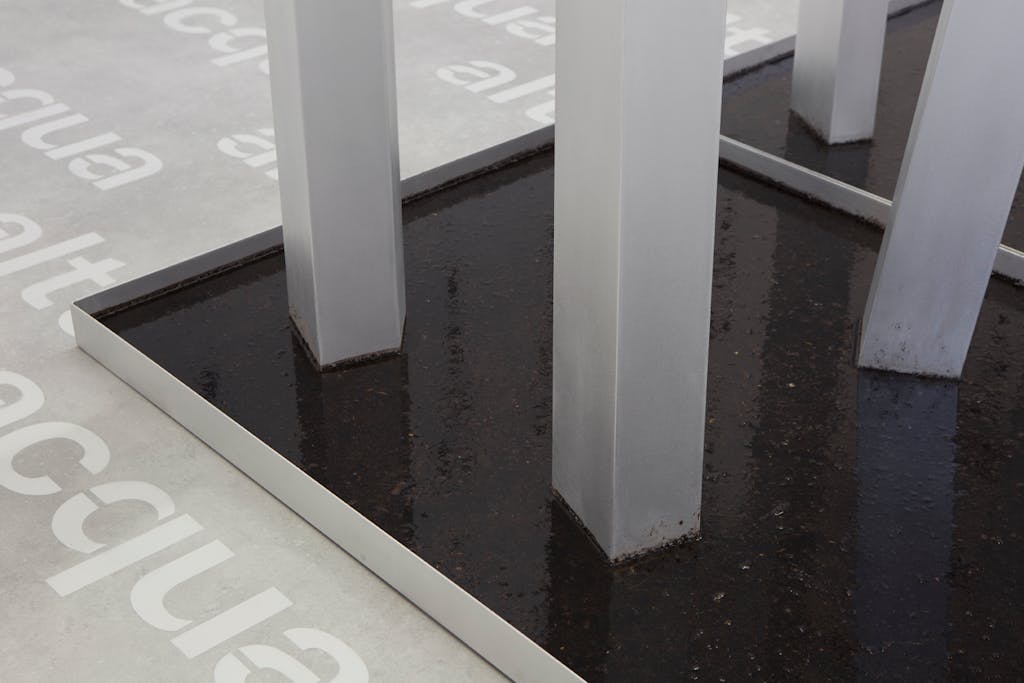 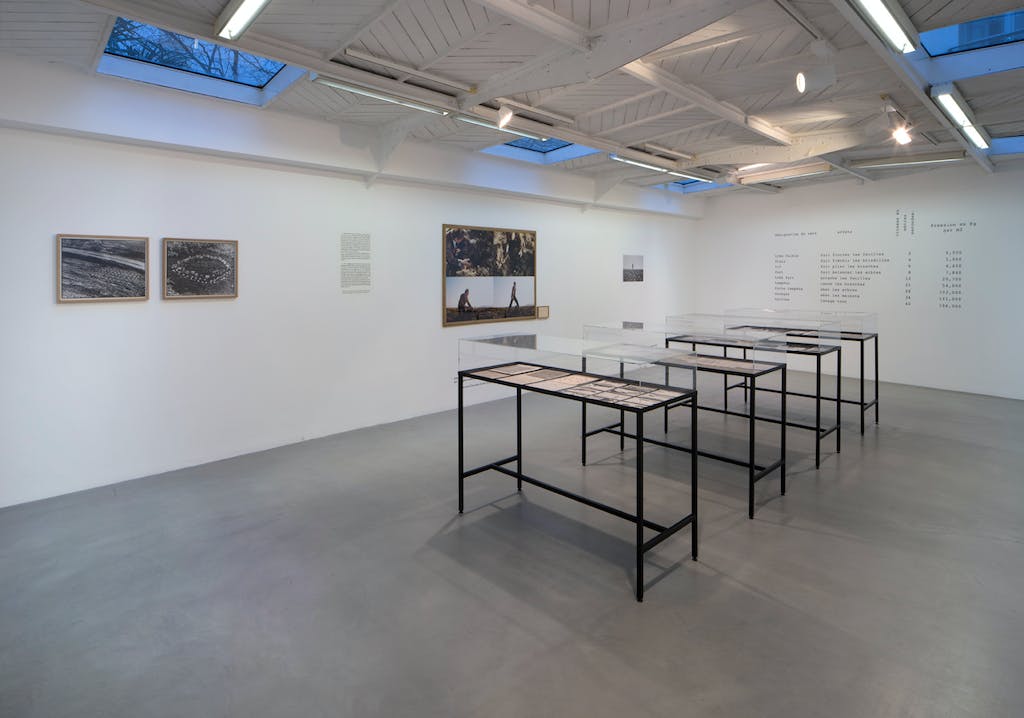 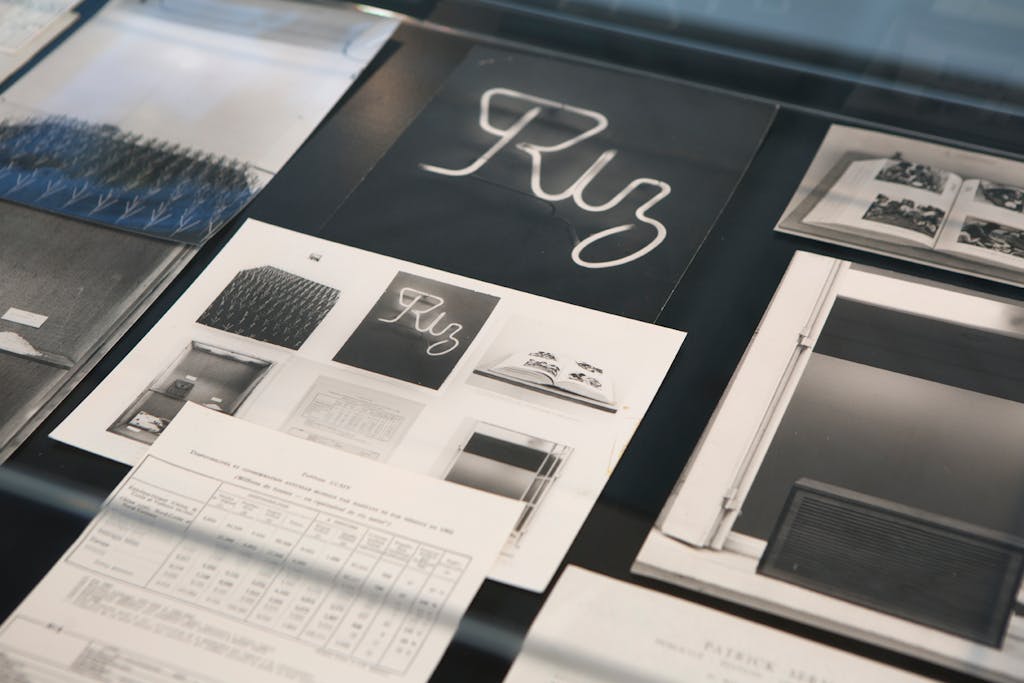 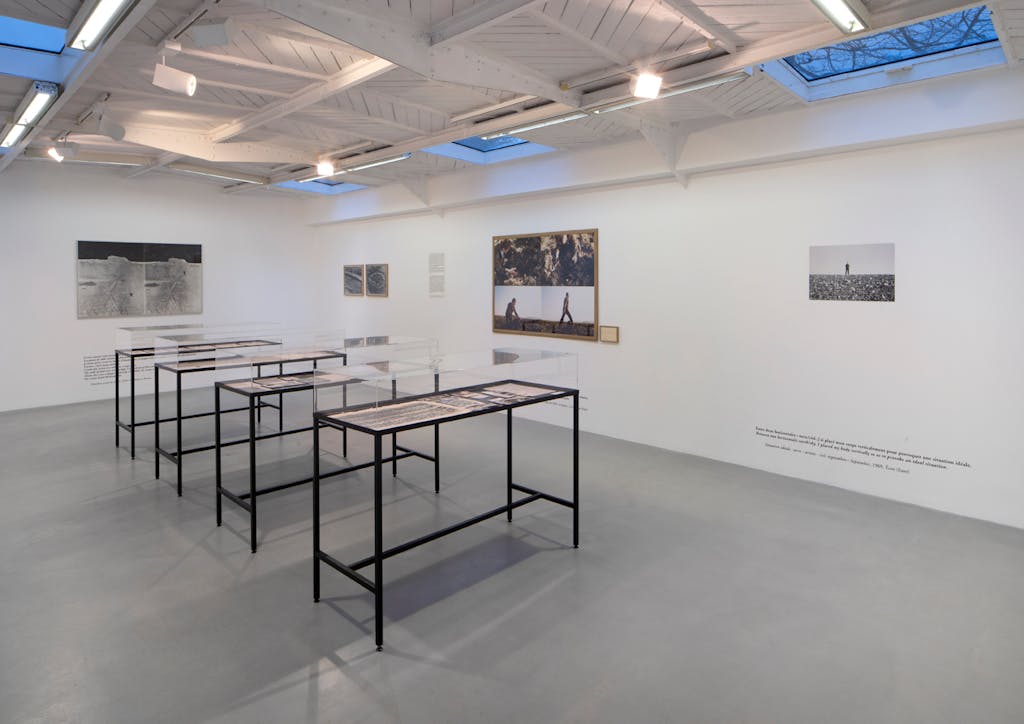 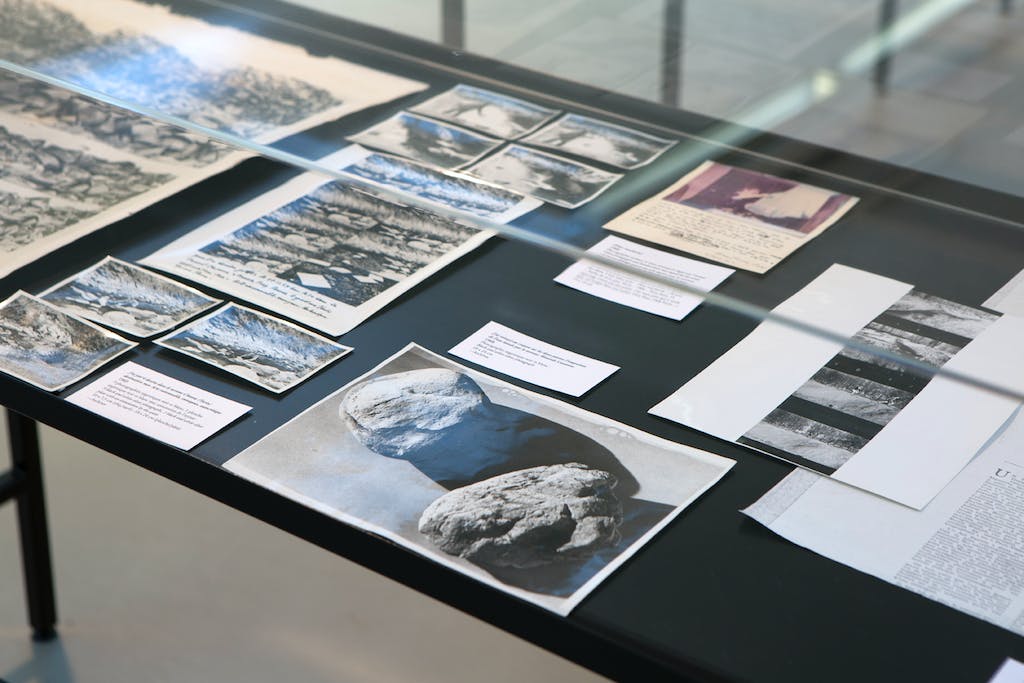 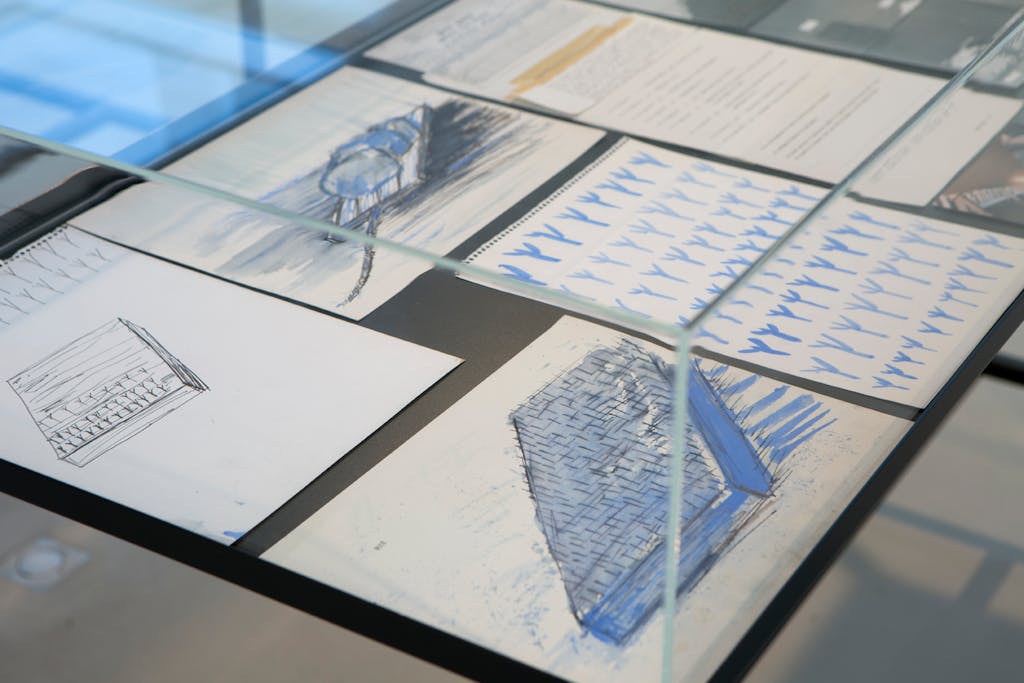 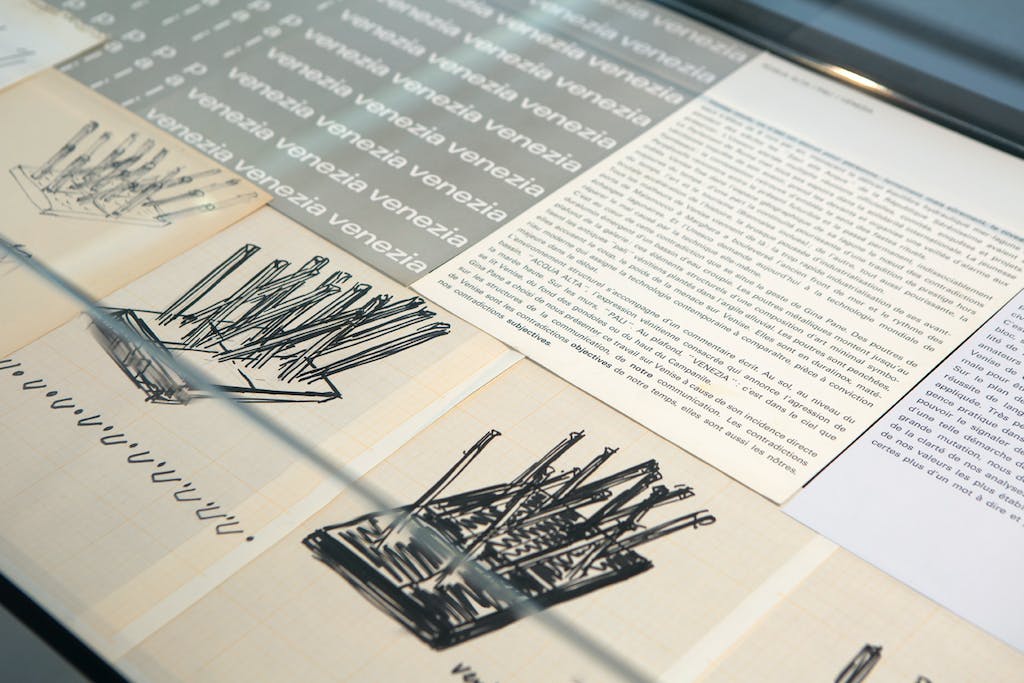