Shipwreck : The Death of a Journey

Kamel Mennour is delighted to present Zineb Sedira – Shipwreck: The Death of a
Journey. For her second solo exhibition at the gallery, the artist is showing her latest
film and a new series of images, shot this summer in Mauritania.
MiddleSea (2008) unravels, during a ferry trip between Algiers and Marseilles, like a daydream. A man, alone, looks out to sea, mesmerized by the vast horizon. He wanders around, a sleepwalker in the deserted corridors of this ghost ship.
Everything on the boat, the white vest flapping in the wind, the tiny pools of water trapped in the undulations on the surface of the deck, even the glass on the bar table, everything seems to express a feeling of longing, only occasionally disturbed by the whining of an old radio. And the memory of the port’s white arcades merges with the waves, and the humming of the engine.
The man waits. He waits like all the generations of travellers who have preceded him in this journey or others, hoping for a new life, and too often disenchanted. He waits, like all the exiled wishing to return, all the inconsolable wanderers who have had to leave their countries. The omnipresent sea unfolds each salty drop bearing the weight of history, but also a promise of renewal. The Mediterranean that divides is also a sea that can bind. When the ship arrives at last, anonymous hands untie the mooring lines. MiddleSea exists between two seas, two bodies of water.
It embodies all departures, all arrivals, all journeys. Shot a few kilometres away from Nouadhibou in Mauritania, the series of photographs and light boxes, Shipwreck: The Death of a Journey (2008), shows a darker side of the idea of transit. Like Algiers, Nouadhibou is marked by the dream of immigration; coming from all over Sub-Saharan Africa, people gather there hoping to board for the Canary Islands. As a backdrop, one of West Africa’s most famous boat scrap yards, and one of the only places in the world where old vessels can be discarded without first being dismantled. Caught between sand and sea, the wrecks lie like huge rusted skeletons, sometimes vomiting their unwanted goods onto the shore. On the beach, we find hundreds of fish that have been intoxicated
by the noxious waters, highlighting the scale of the ecological catastrophe. In this Dalídian ocean of sand, absurd rickety masts are erected like totems, and Batterie, the old French colonial fort, has become a house of cards, whipped by the winds. In these shots, there is a bizarre sense of solemnity, the severe and disquieting beauty of a graveyard. In Nouadhibou, dreams are lived and broken. 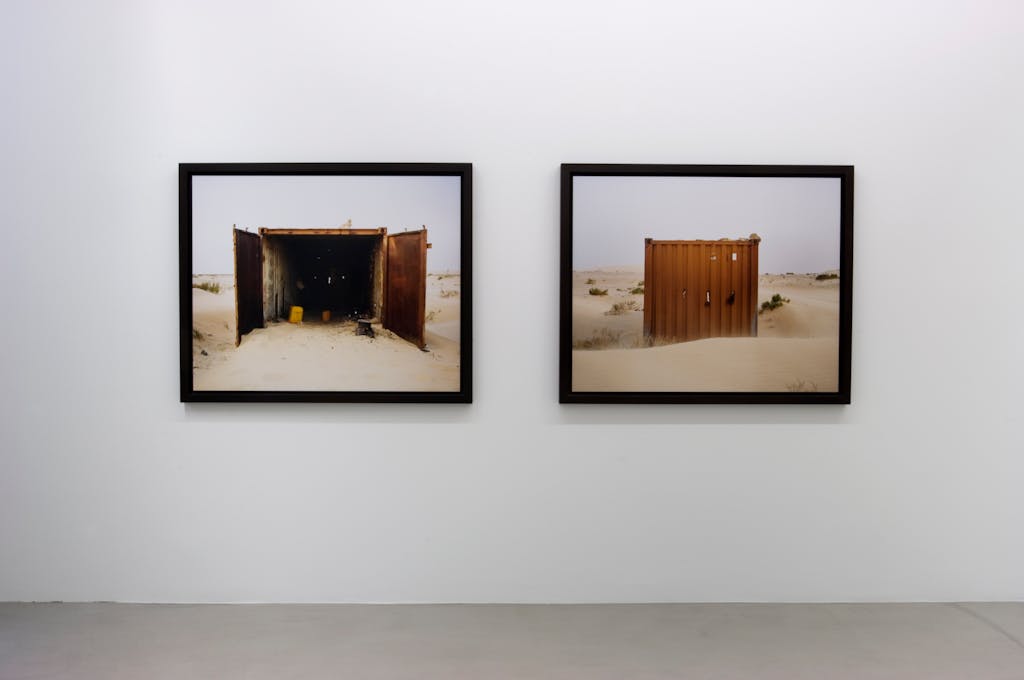 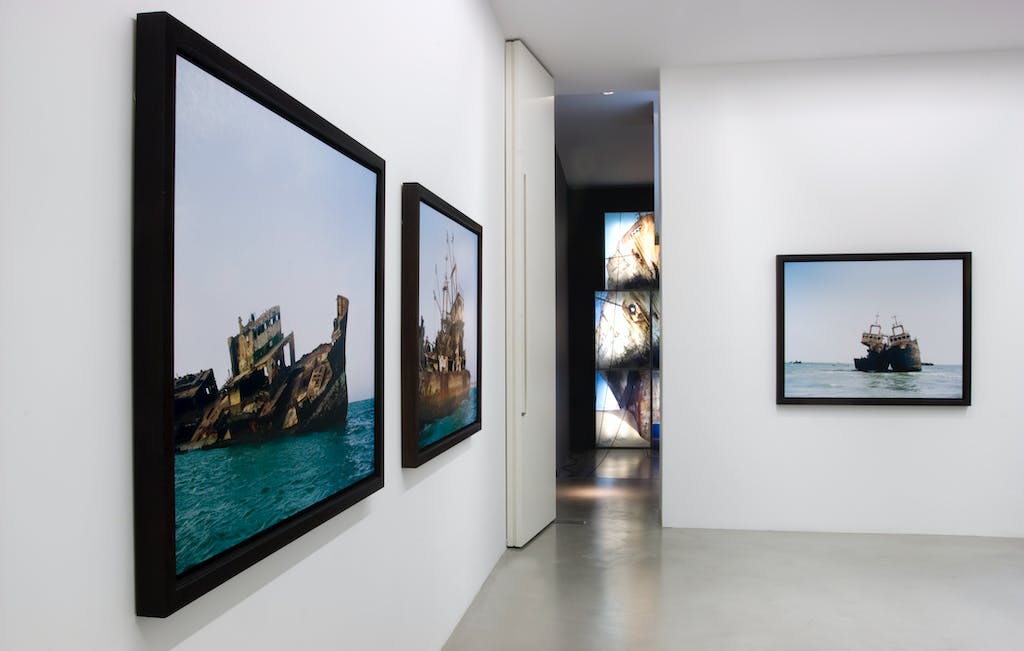 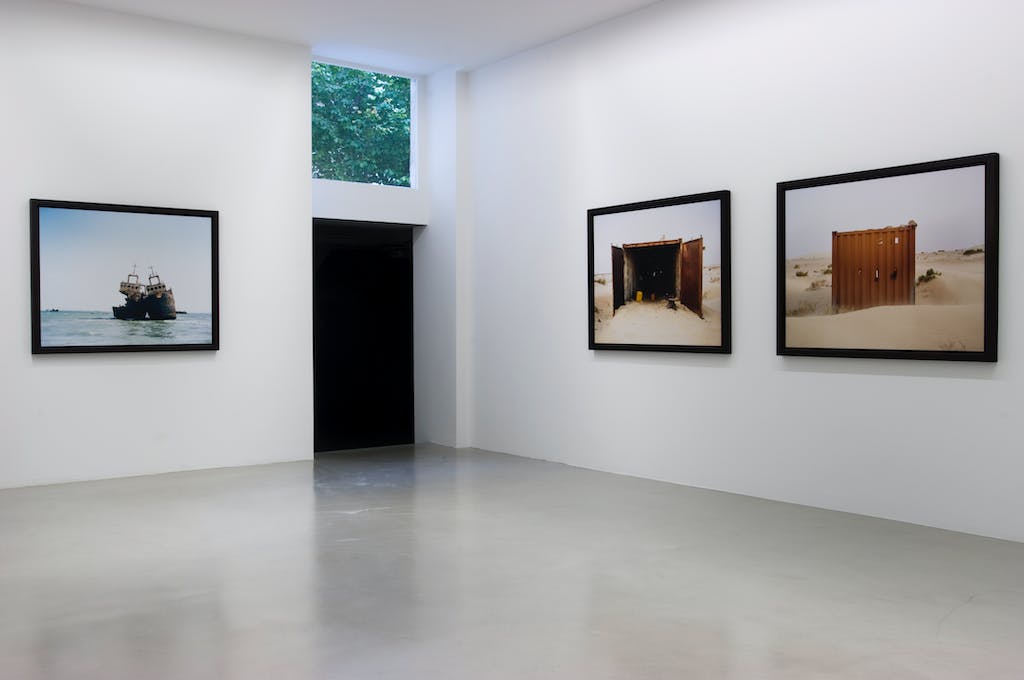 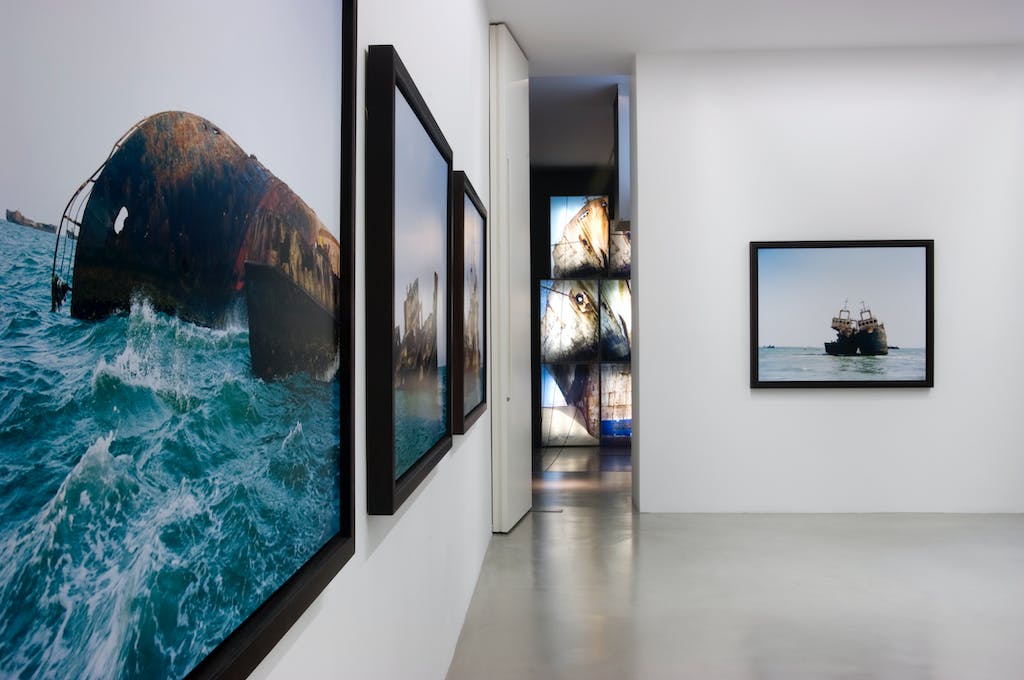 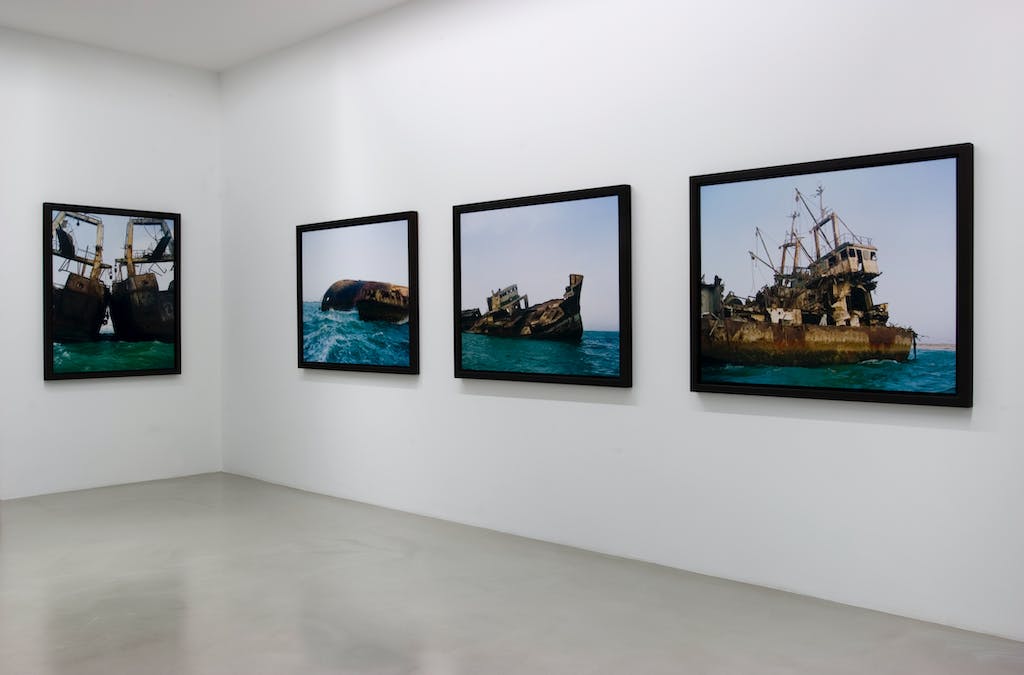 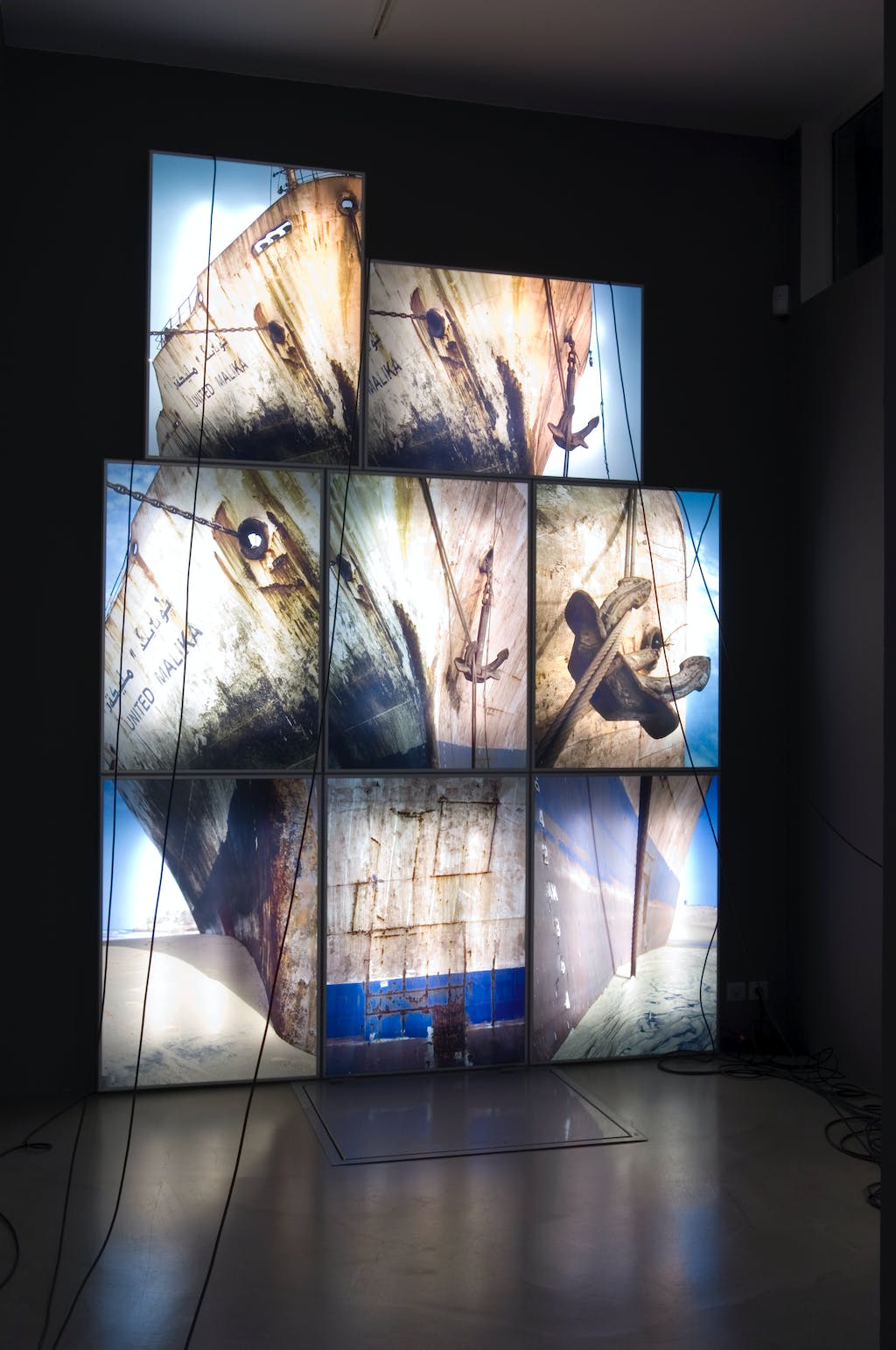 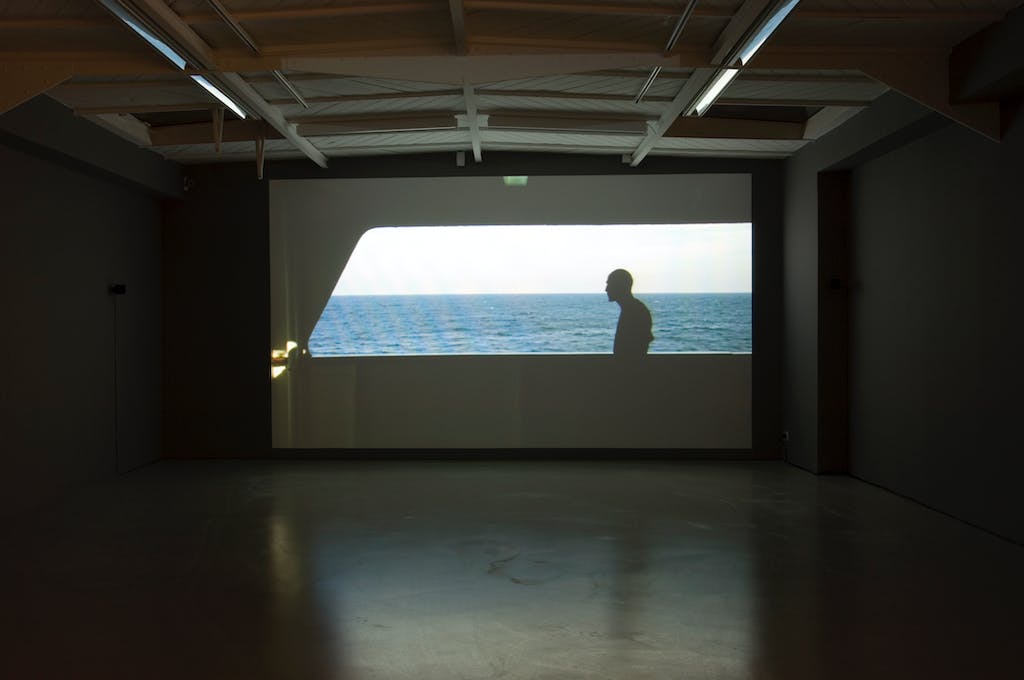 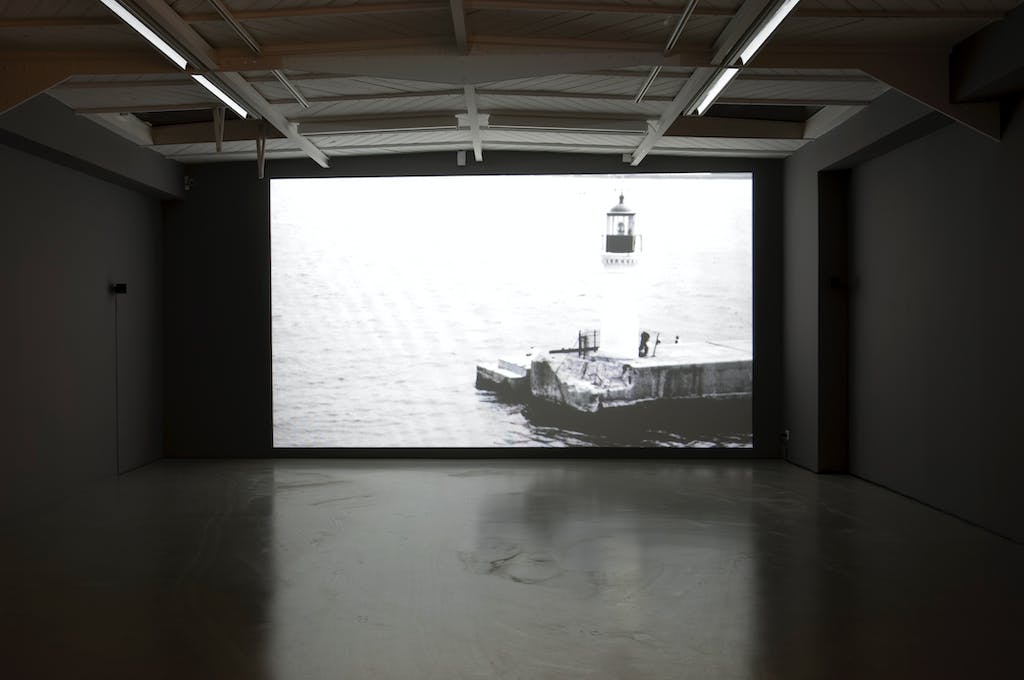 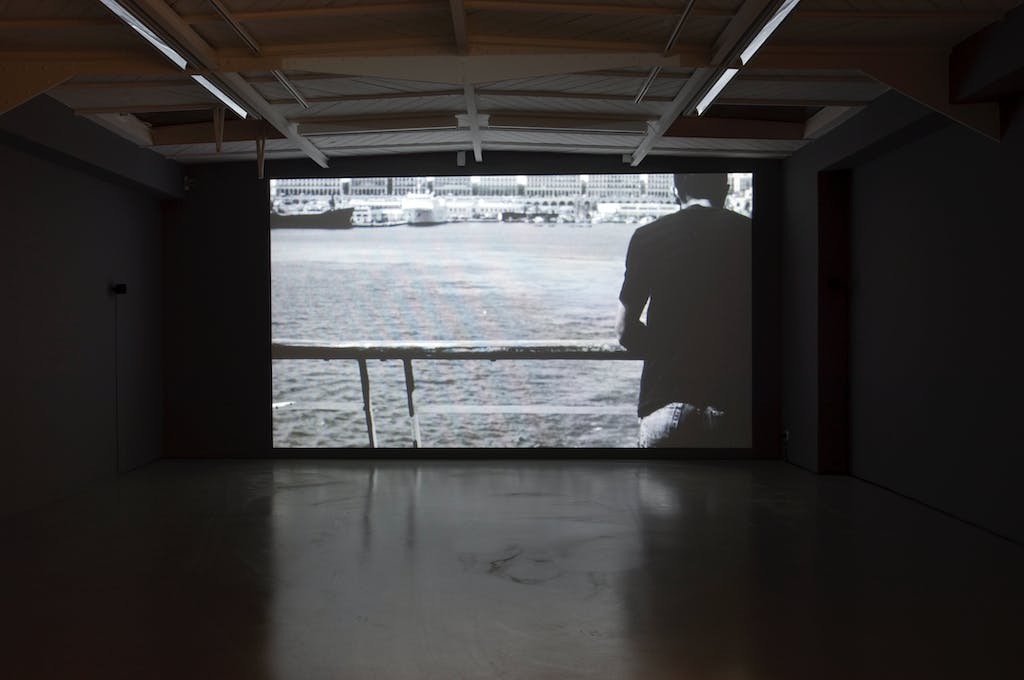 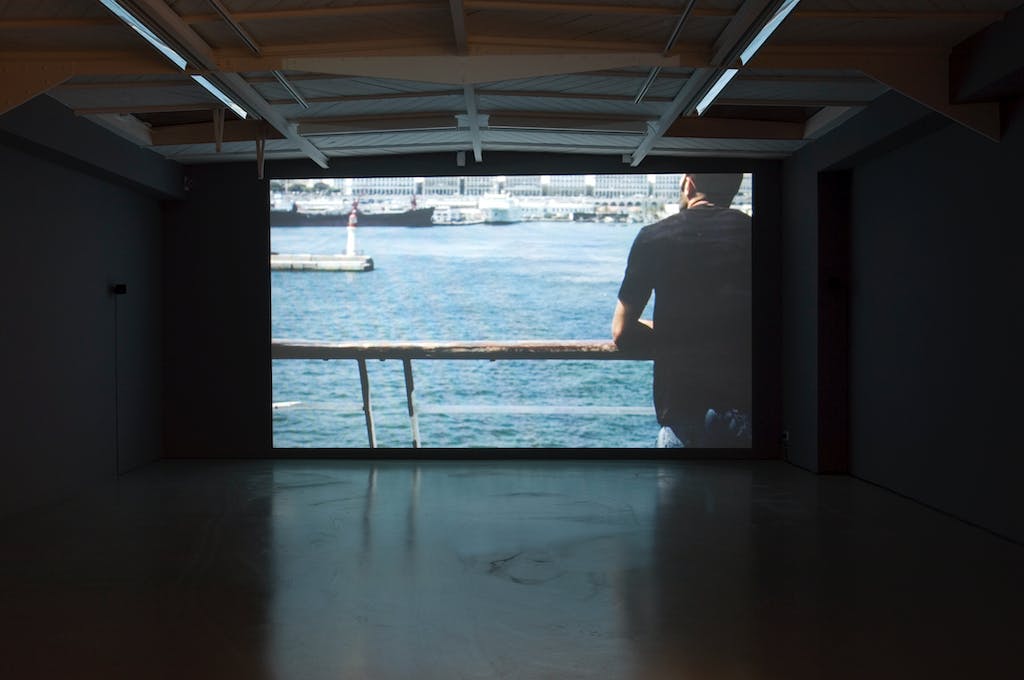 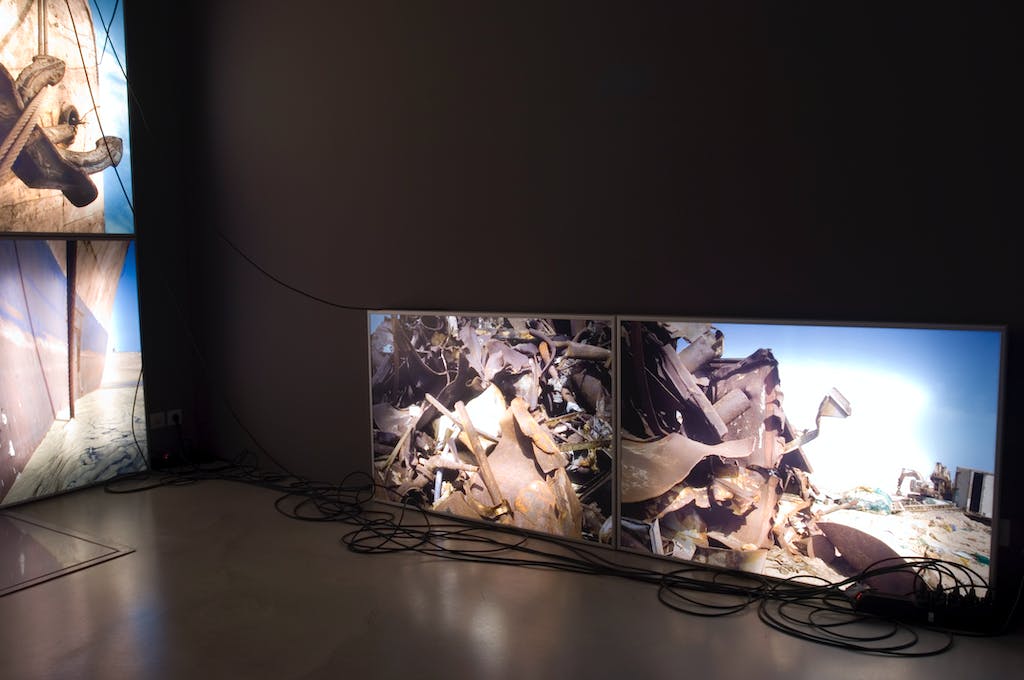 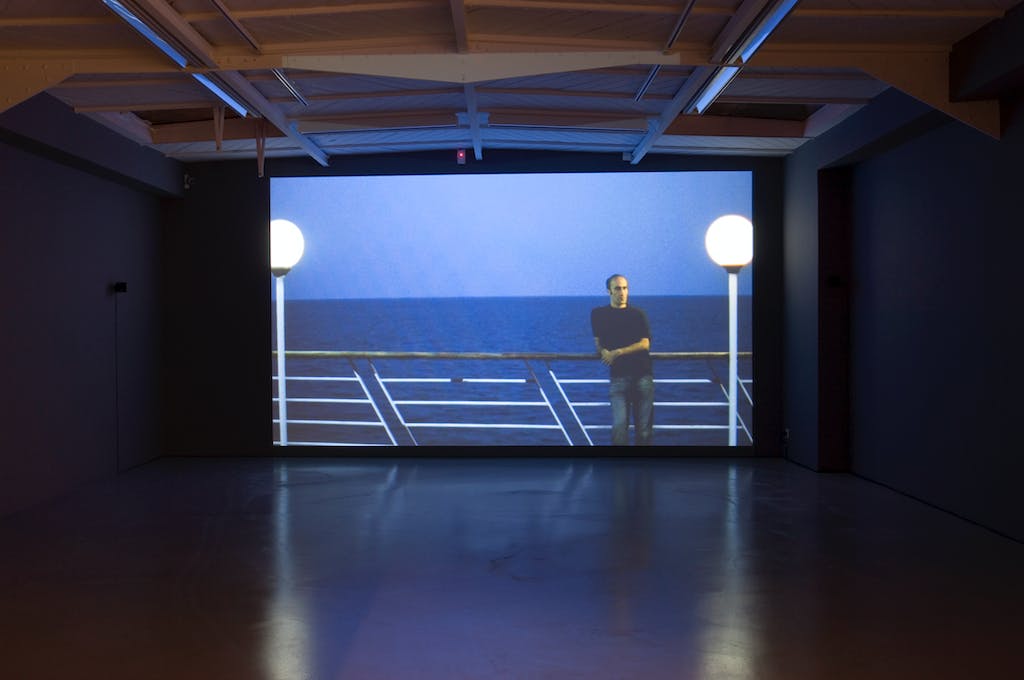 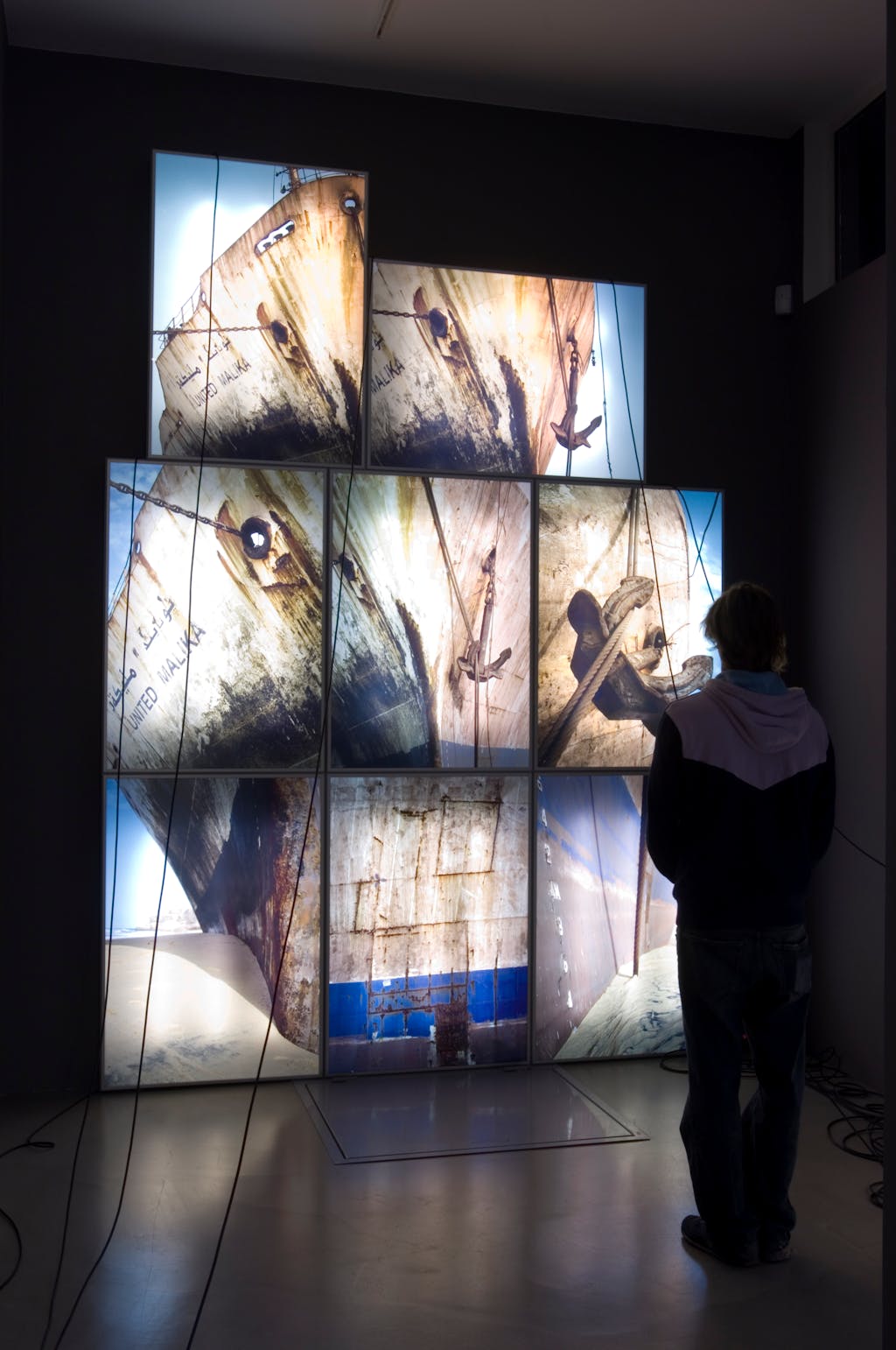 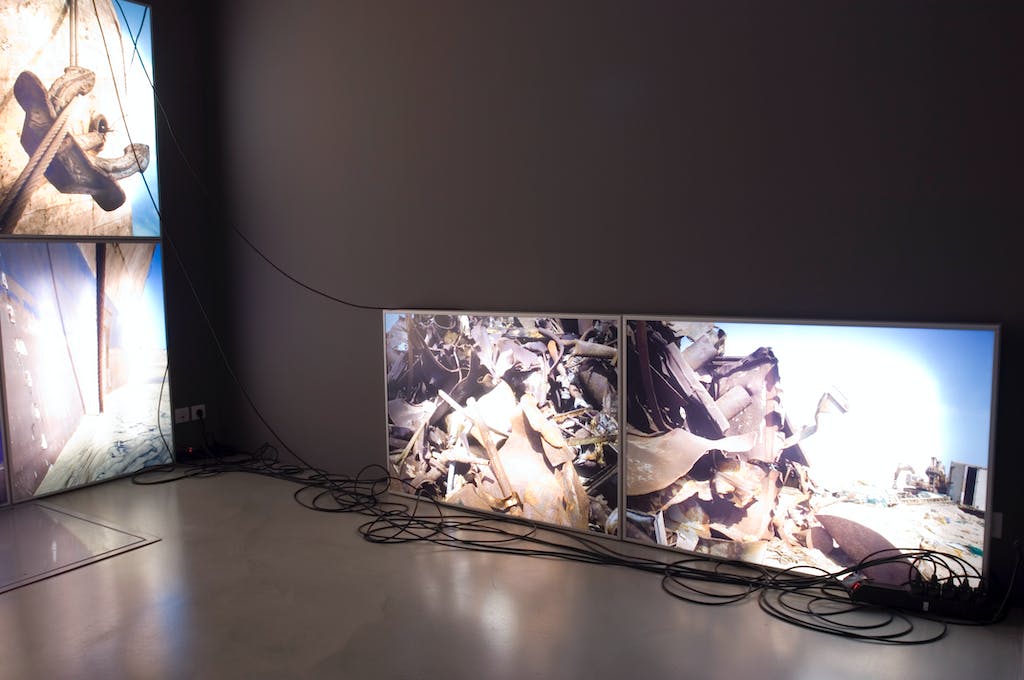 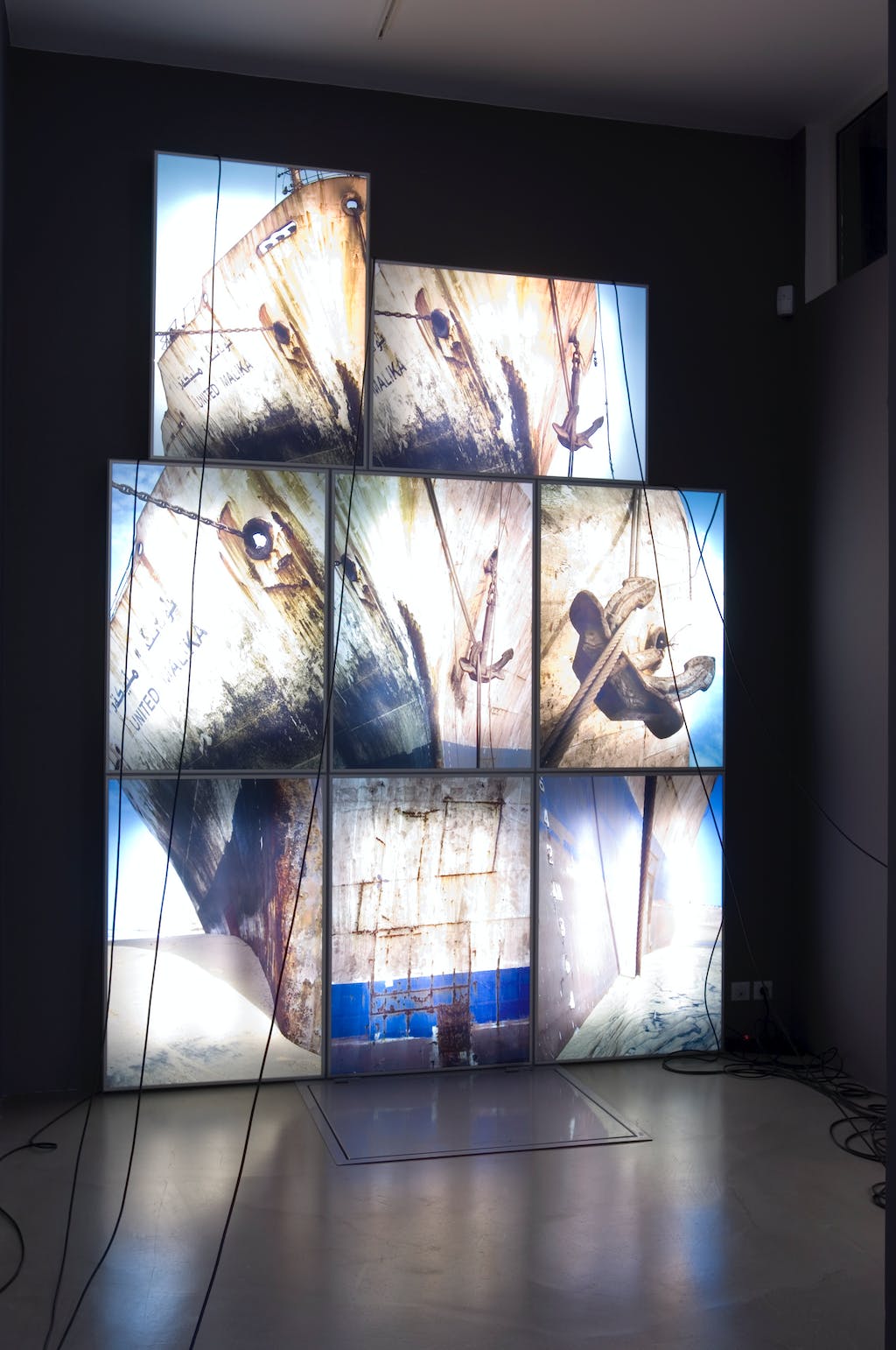 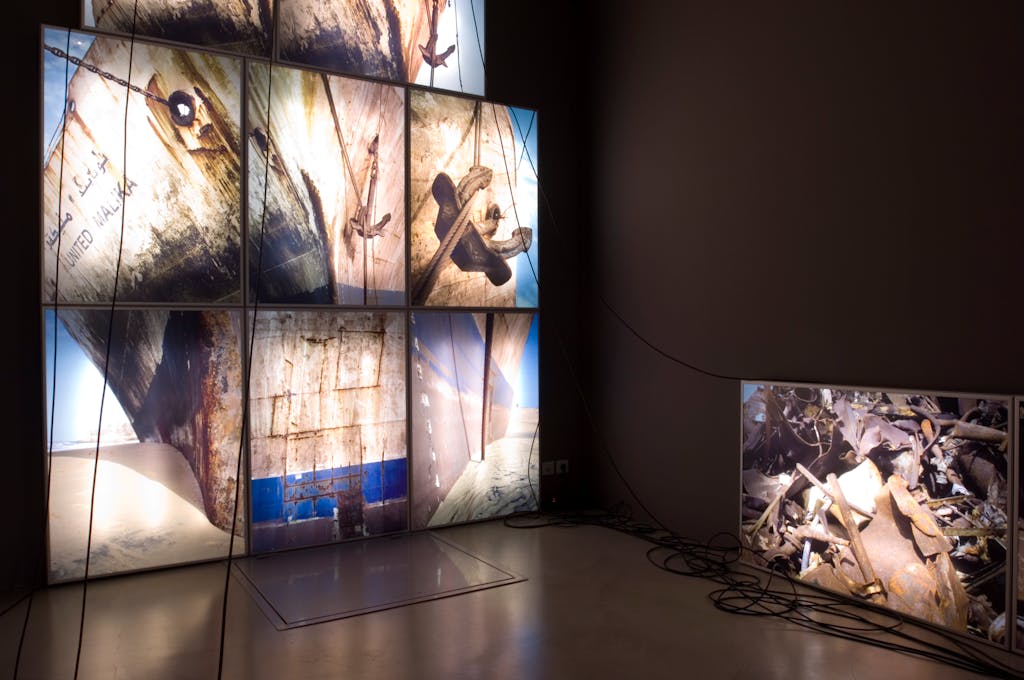 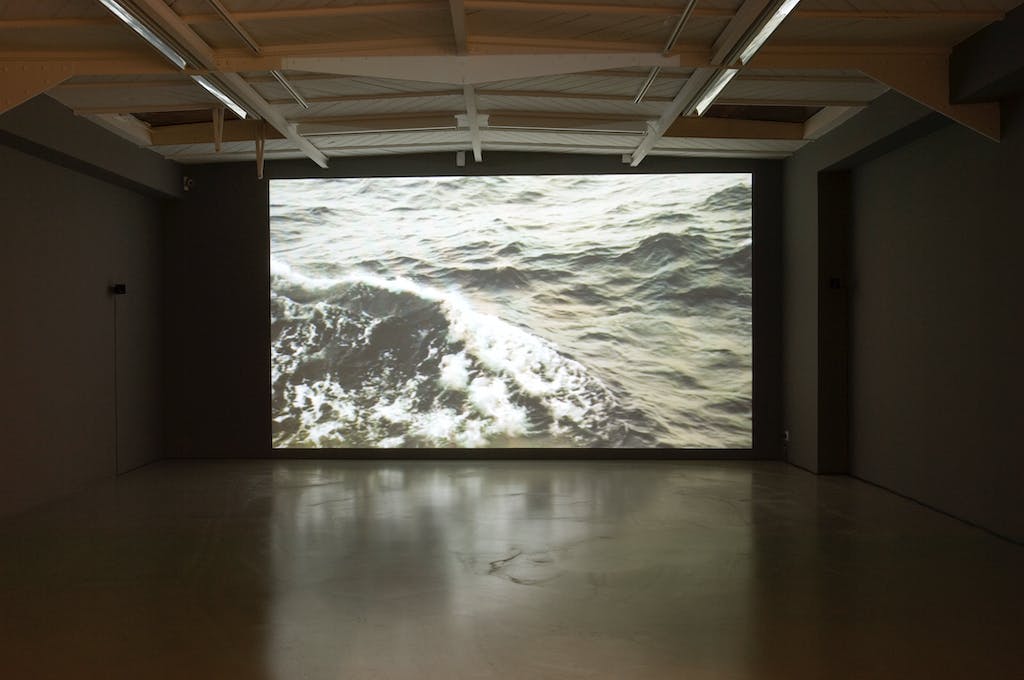