At the Biennale d’art contemporain in Rennes, Michel François is presenting a
work at the end of September with a title as poetic as it is ambiguous: Scène
des abandons [Stage of abandonments]. This retrospective installation, with
which most of the objects in his third solo exhibition at kamel mennour
are in dialogue, is a space for catalysing a collection of finished objects and
unfinished processes, a sort of laboratory of ideas and experiments. François
has produced spaces like this before, with Bureau augmenté (2000) and
Le Salon intermédiaire (2002). Each time there has been an identifiable kind
of space, by turn connected to work (the office), waiting (the waiting room),
and now the theatre (the stage). One could remark on the fact that over the
last fifteen or so years the artist has gone from an augmented office to a stage
of abandonments. The principle of voluntaristic growth in the work-place
has given way to a theatrical letting go. But the abandonment here is not
psychological in the sense of a resignation or a renouncement. It is rather a sort
of letting go in respect to the intrinsic resistance of his materials, an attentive
observation of their capacity for taking shape by default. It is this capacity that
he wants to bring to light.
In the living system that is Michel François’ oeuvre, growth and decay have
always cohabited as they do in nature. There are upsurges and collapses,
projections and flows, erections and detumescences, contaminations and
retractions. Throughout his work, there is the question of production, value,
growth, and circulation, but just as much, and simultaneously, of inertia,
devaluation, decomposition, loss, dissemination. Control and chance mix
together on the best of terms. This ‘letting go’ suggests a more intimate footing
with time than even nature takes in the bestowing of form.
‘Let the water disperse in the plaster. Let the vinegar dissolve in the marble.
Let the ice cubes melt. Let the rain plow ravines. Let the soap shrink. Let the
fire warp the sheet metal. Let the sea wear away at the wood. Let the molten
bronze flow over the floor. Let everything stiffen under hard water. Let your
sweaters wear out at the elbows. Let the sun shine. Let the spiders spin their
webs. […]’, writes Michel François.
François creates a form of continuity between what is and what is not
(yet) art, proposes a definition of art as a moment, with gestures giving the
impetus and forms the result. The forms are immediately fixed, as if frozen
in their movement. For instance at the 28 avenue Matignon, the web made
by the bronze when it is thrown over the floor is lifted onto the wall, where
it forms a painting, like an arrested explosion. The sheet metal, where an
insistent blowtorch has made a constellation of eyes, is covered in chrome and
becomes shimmering, untouchable, as if cooled down. Concretions of plaster,
randomly extracted from a basin in which a watering hose has been fed, are
patiently sanded and sliced. For François, the legitimacy of these forms, issuing
as they do from empirical protocols, must not be made to depend on a myth
of process. Their existence has to triumph in the form of finished objects. This
is where the staging comes in, as a way of arranging the gaze, bringing within
the scope of the viewer the very artificiality of interrupting the continual flux
of metamorphosis in the materials. 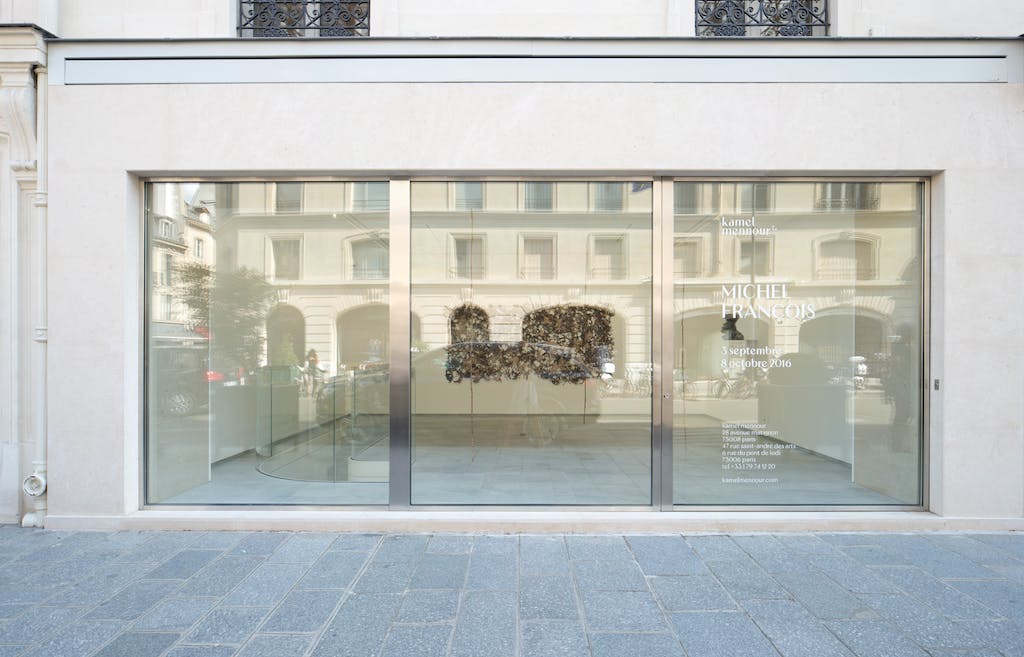 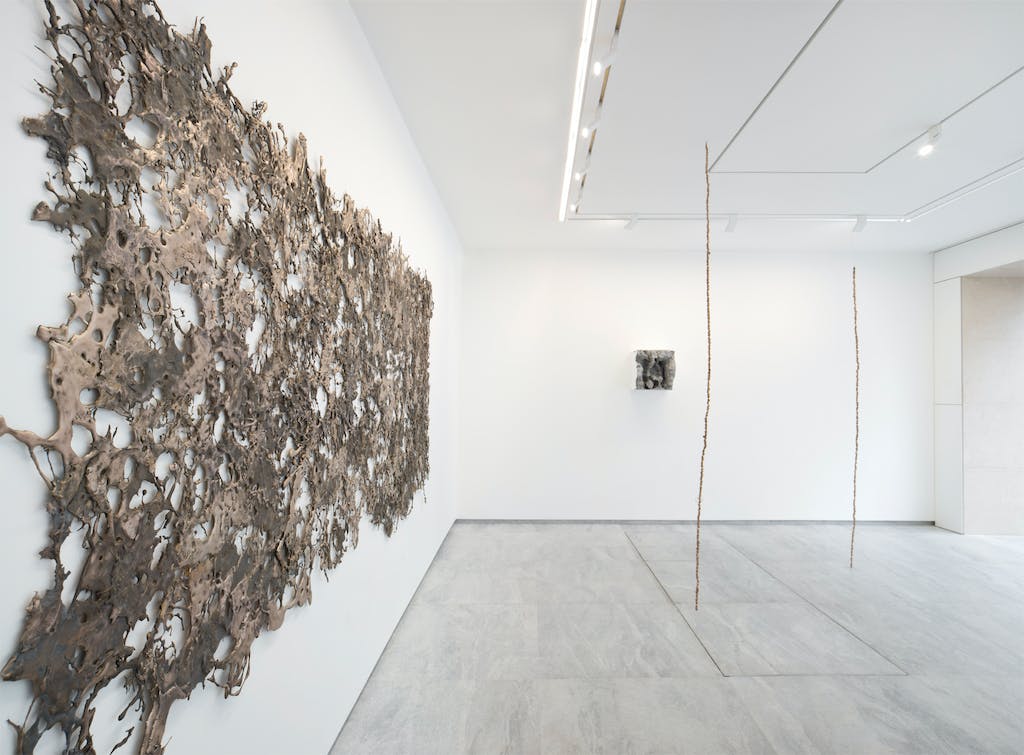 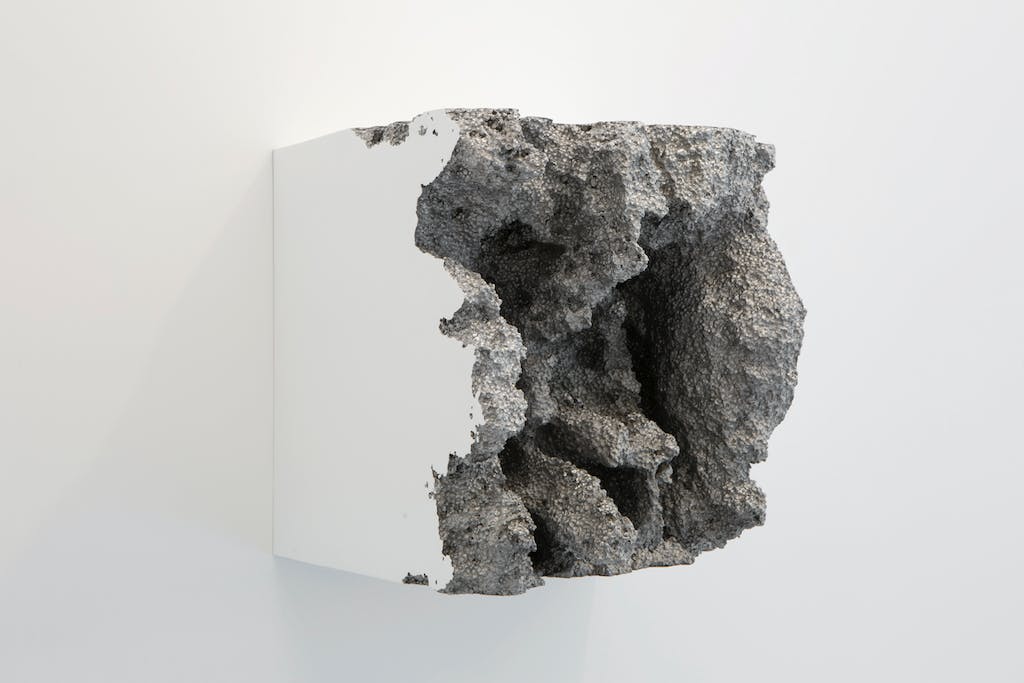 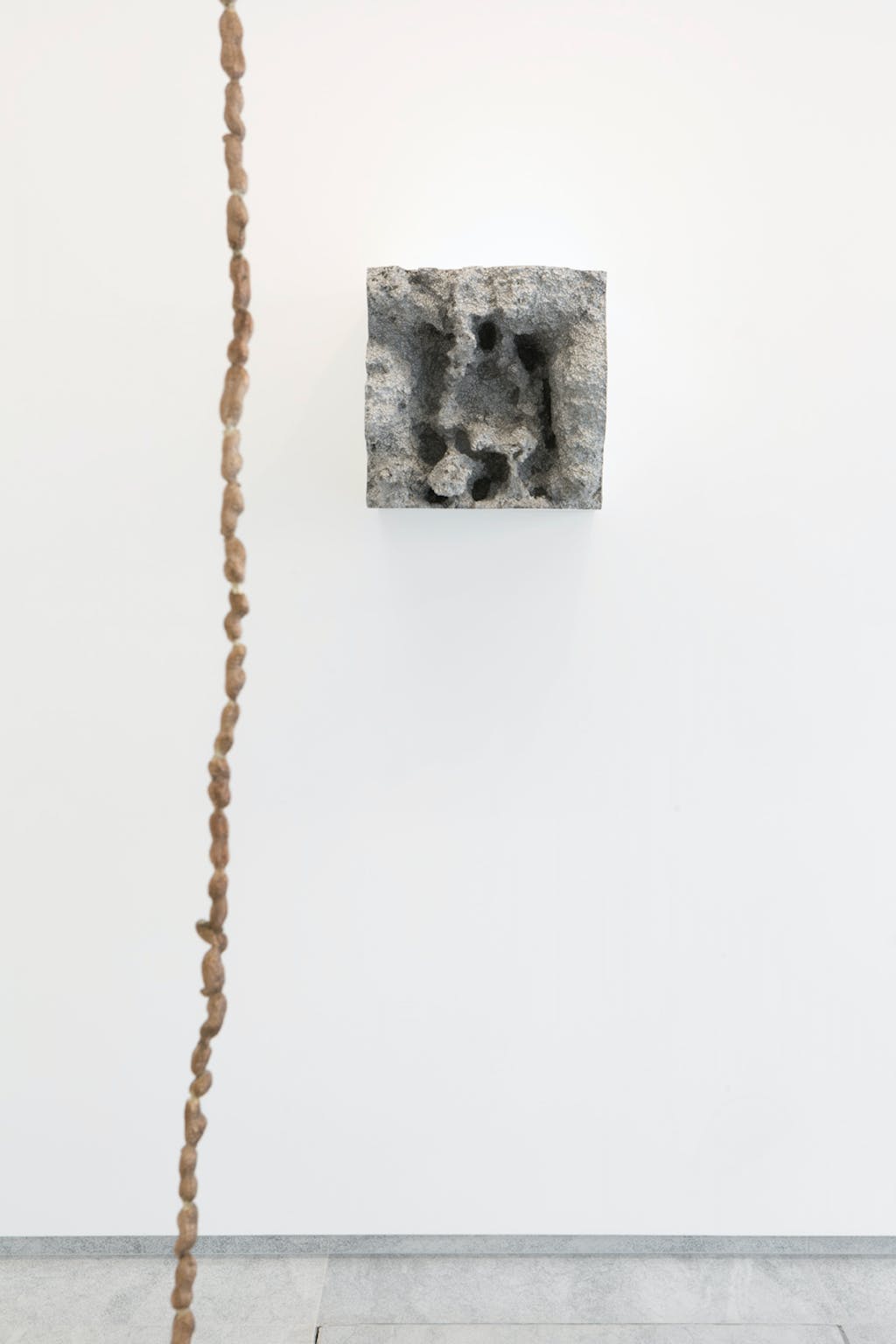 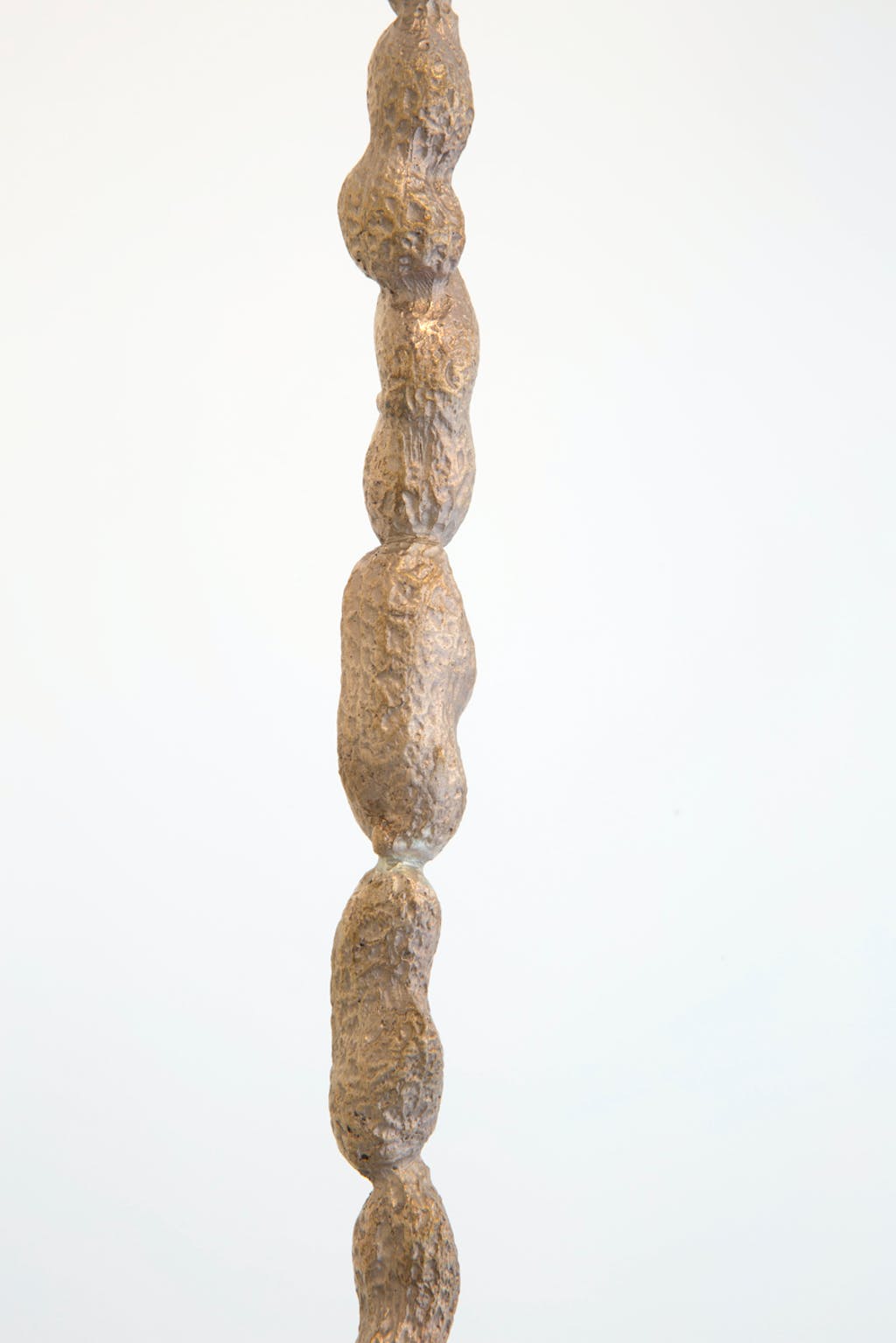 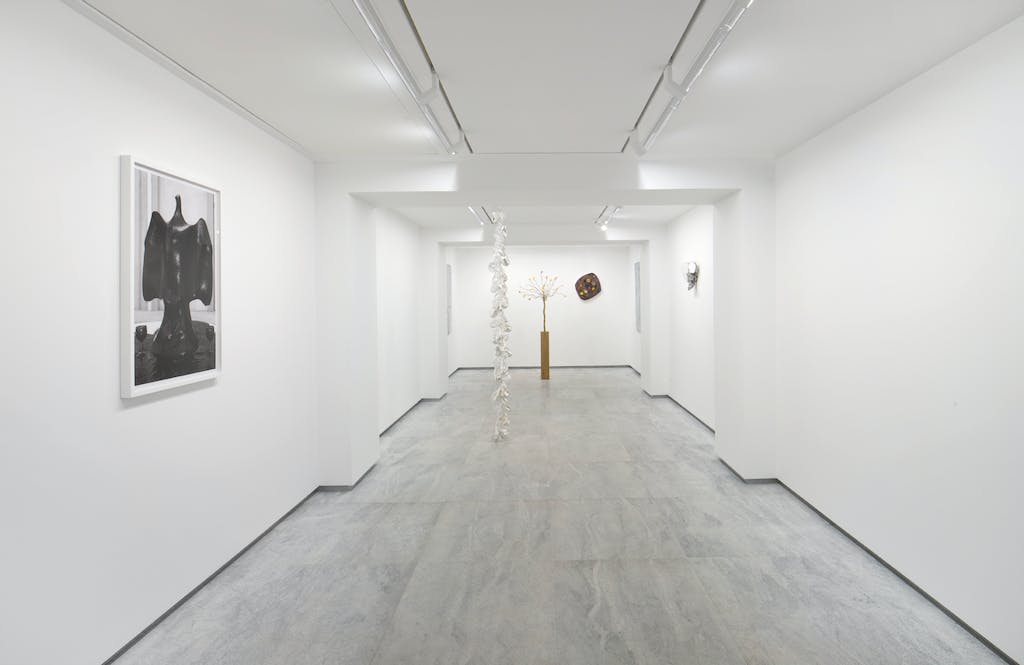 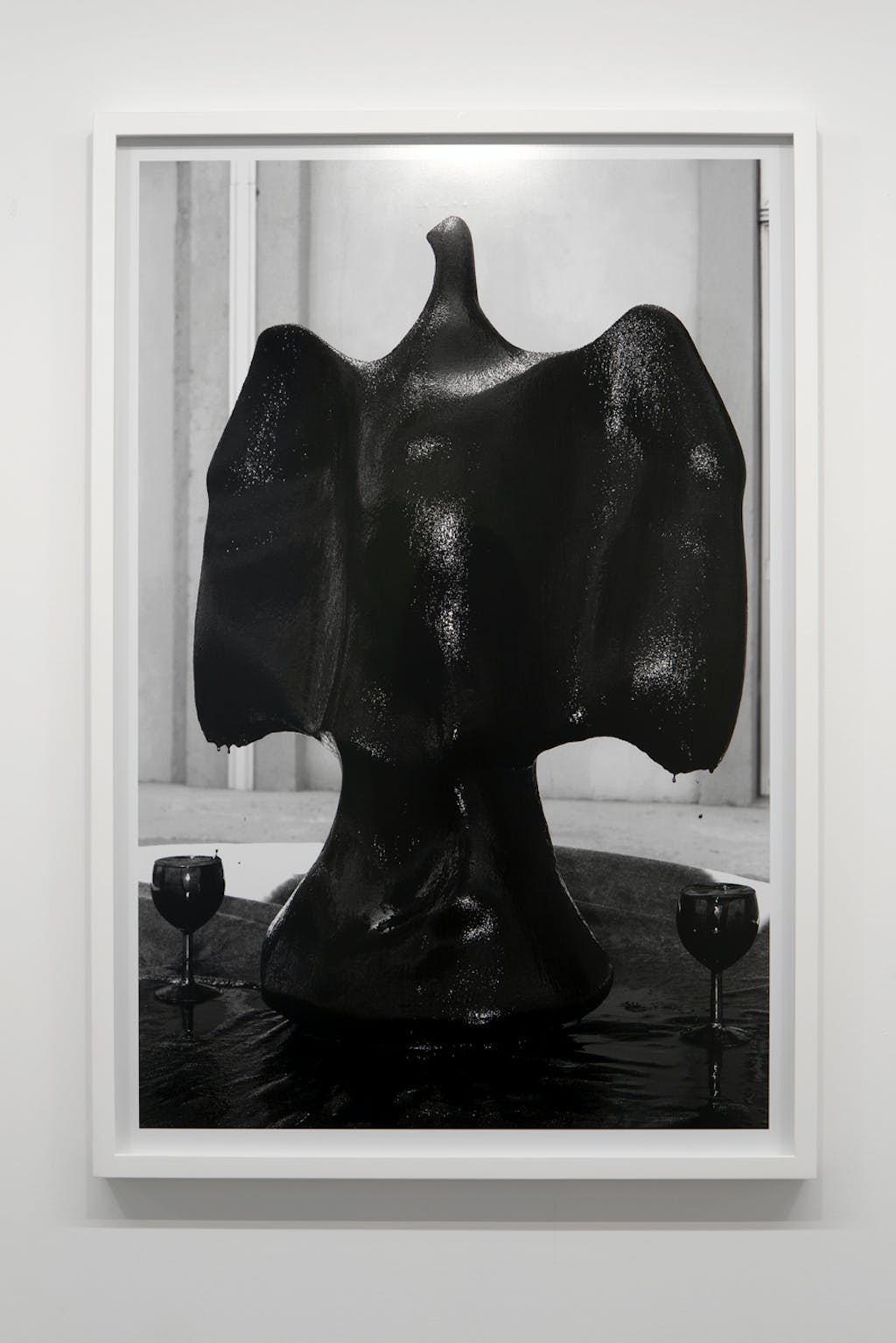 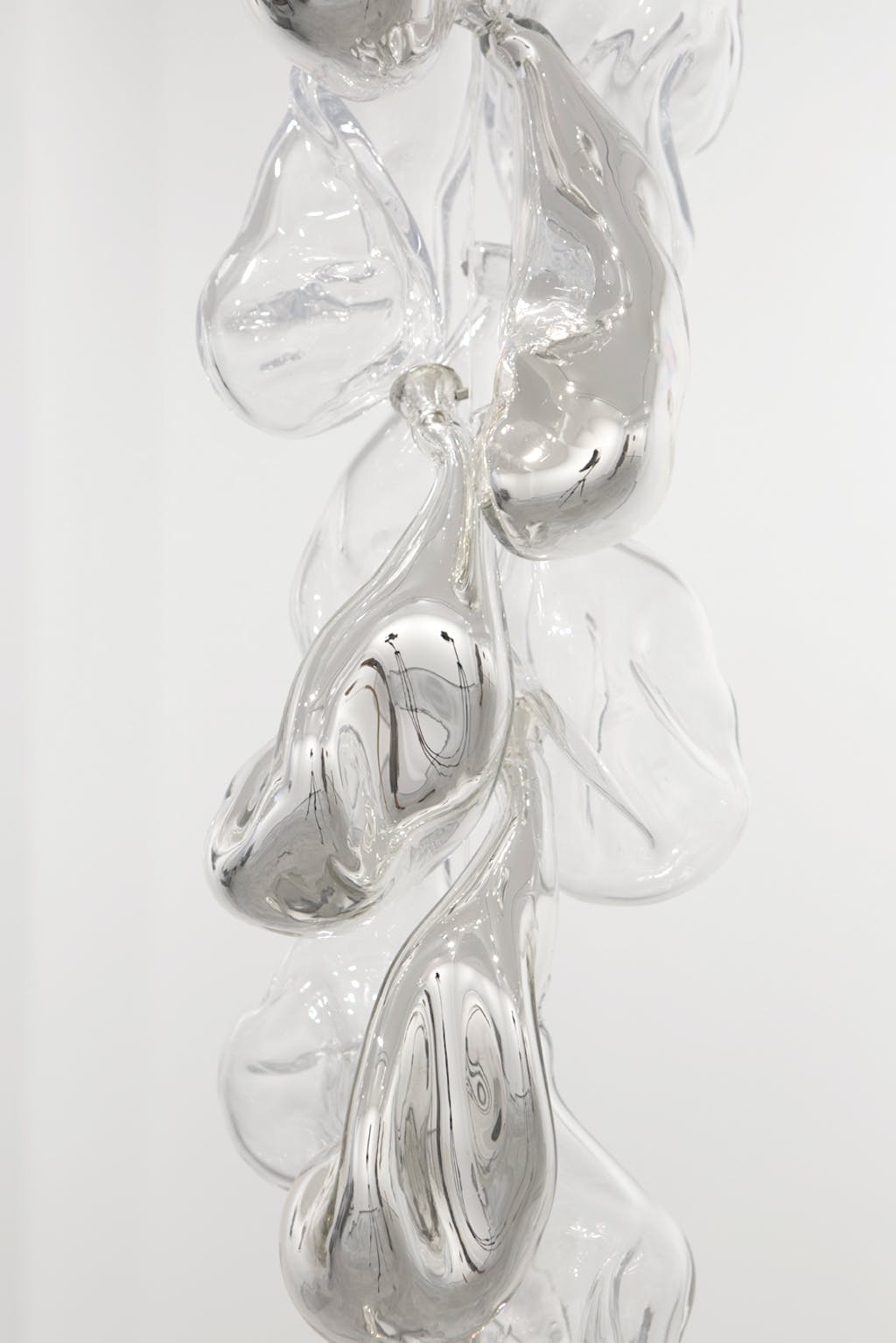 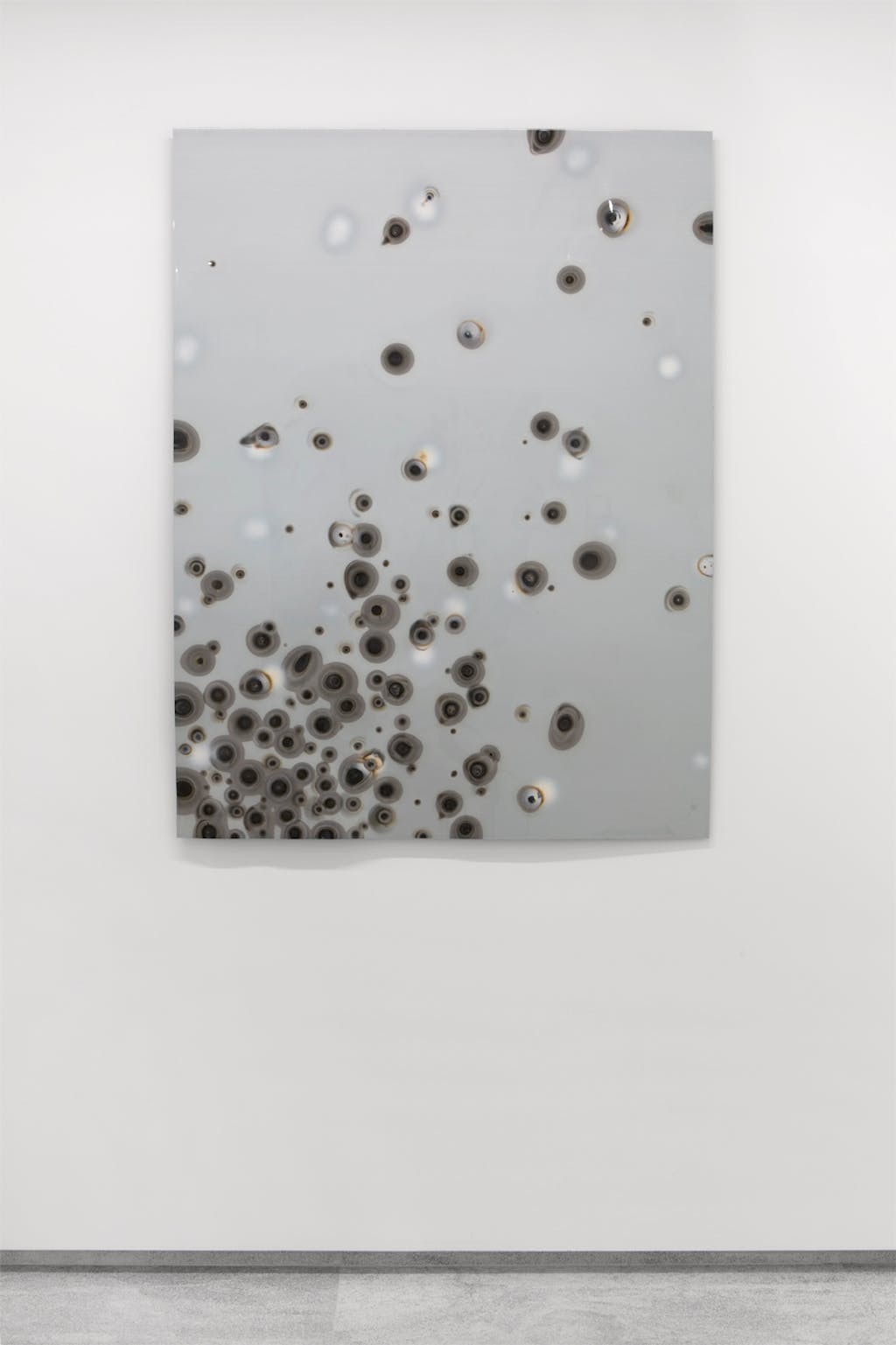 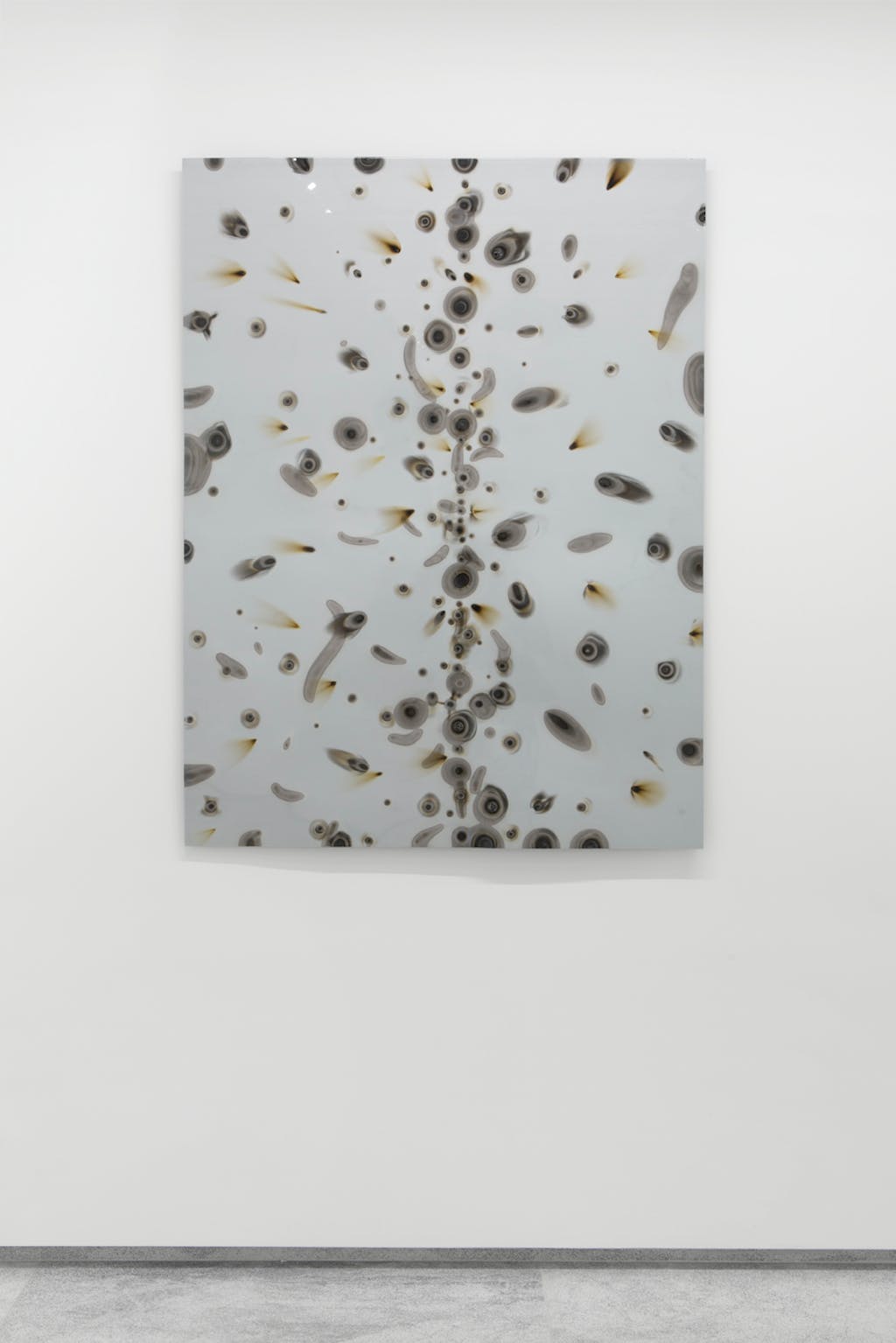 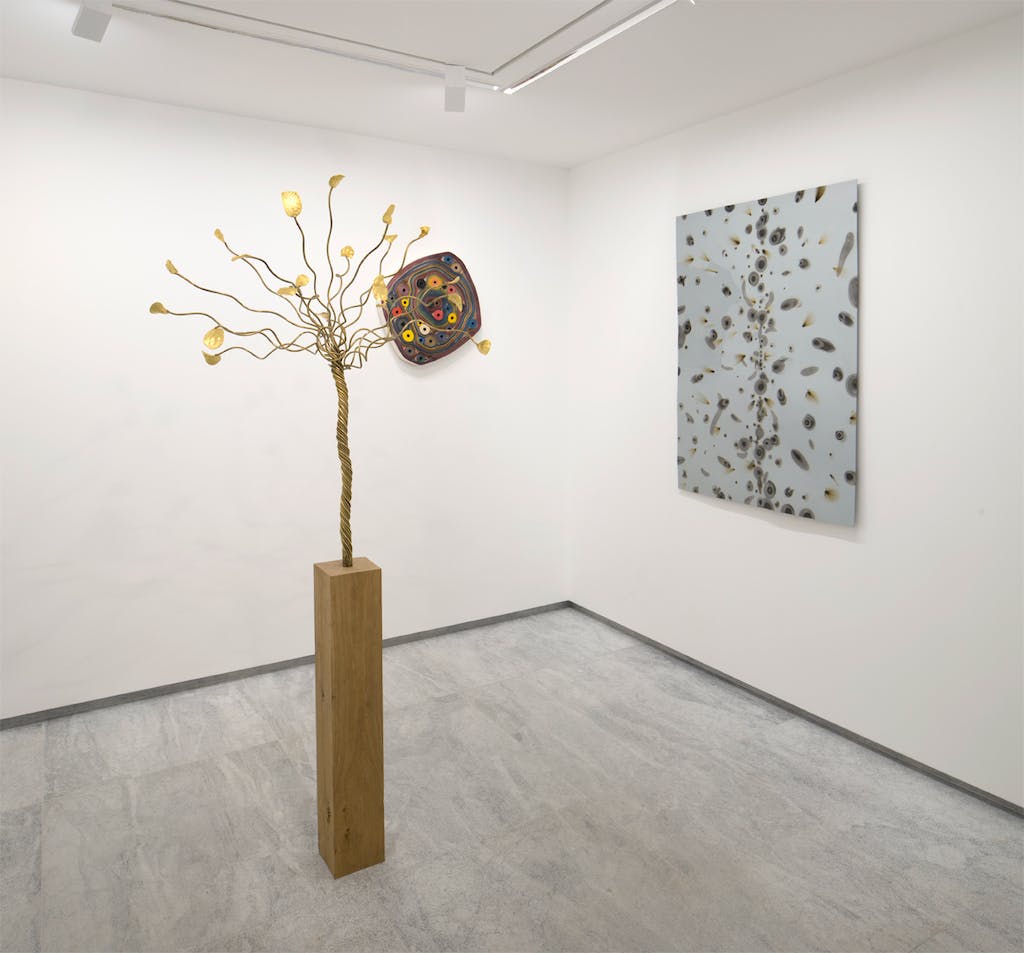 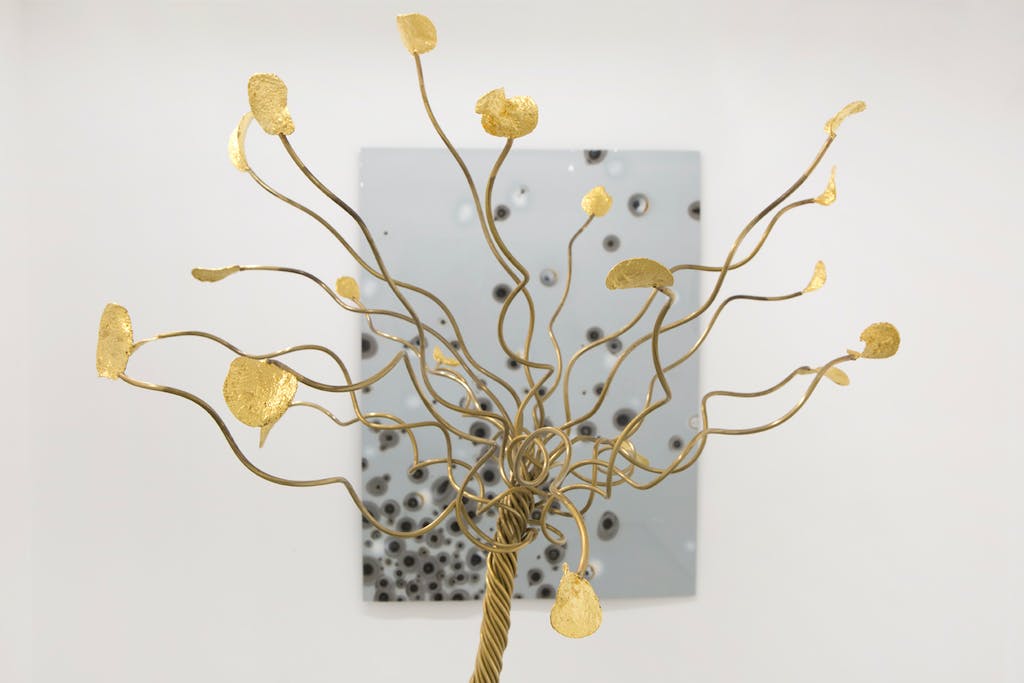 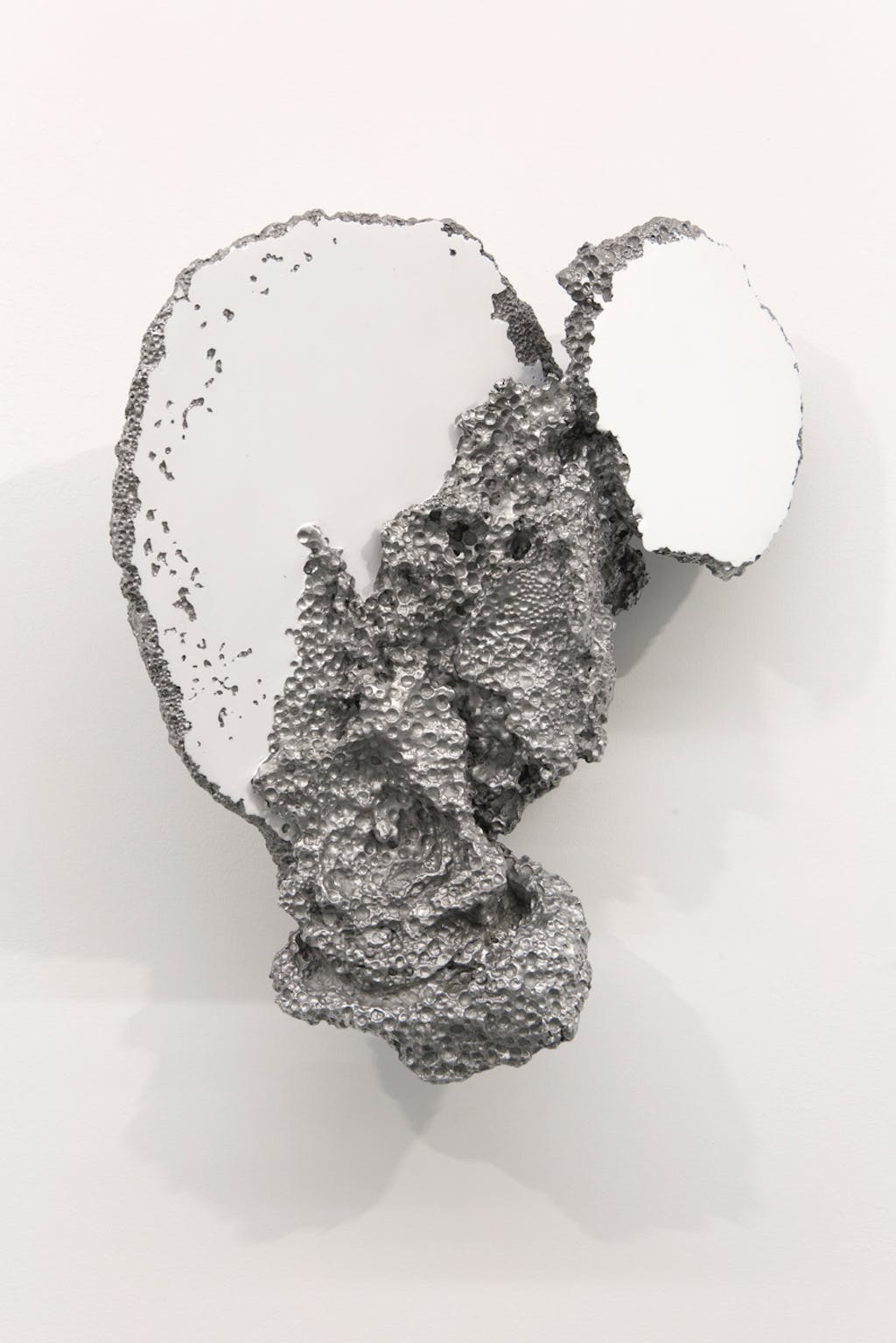 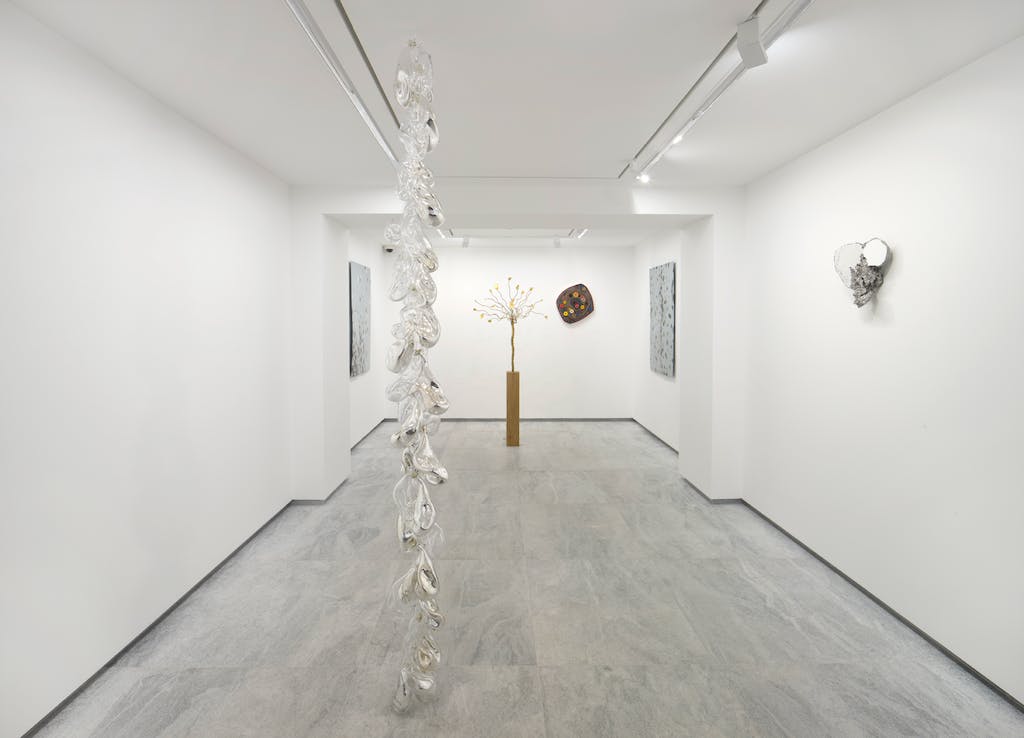 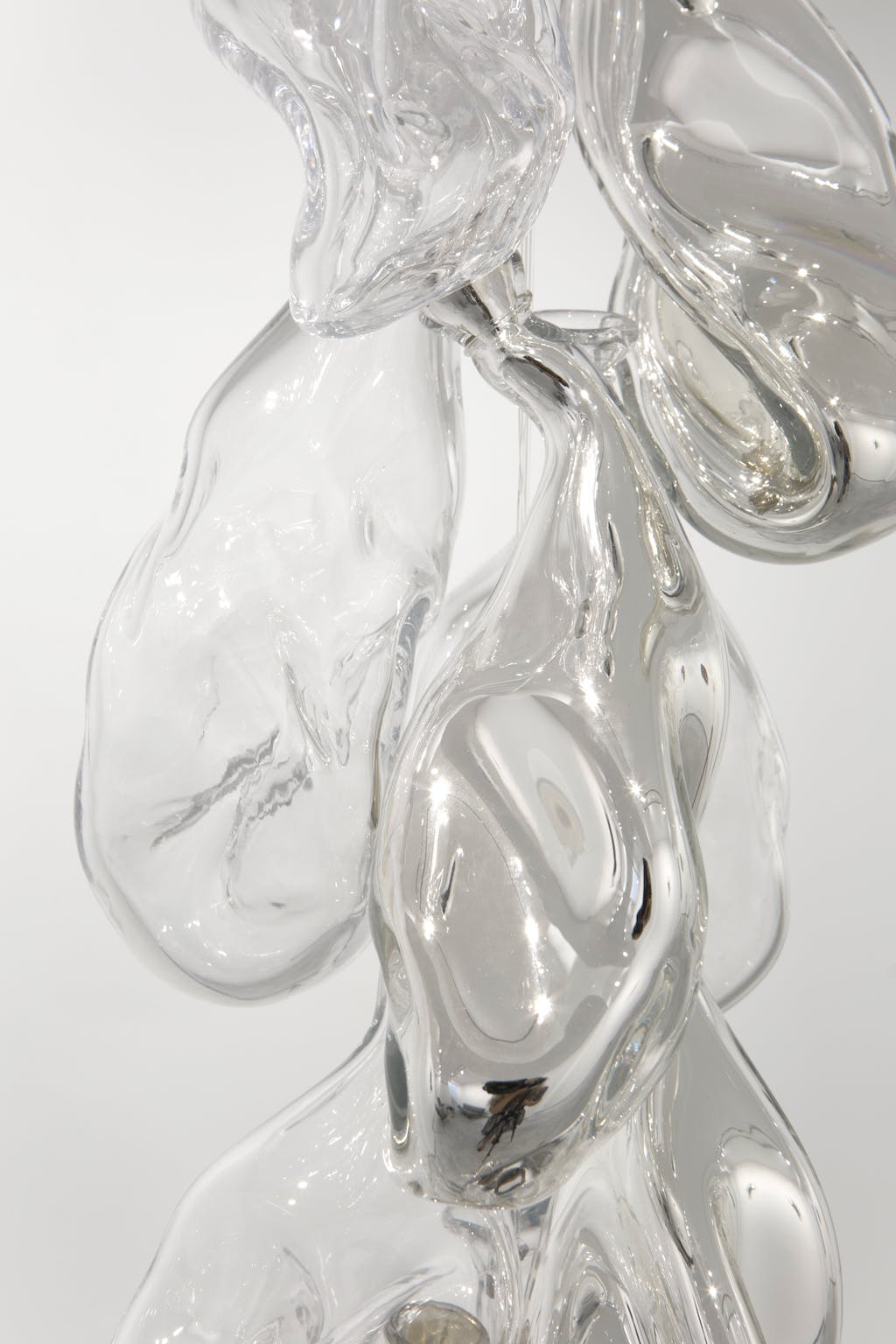 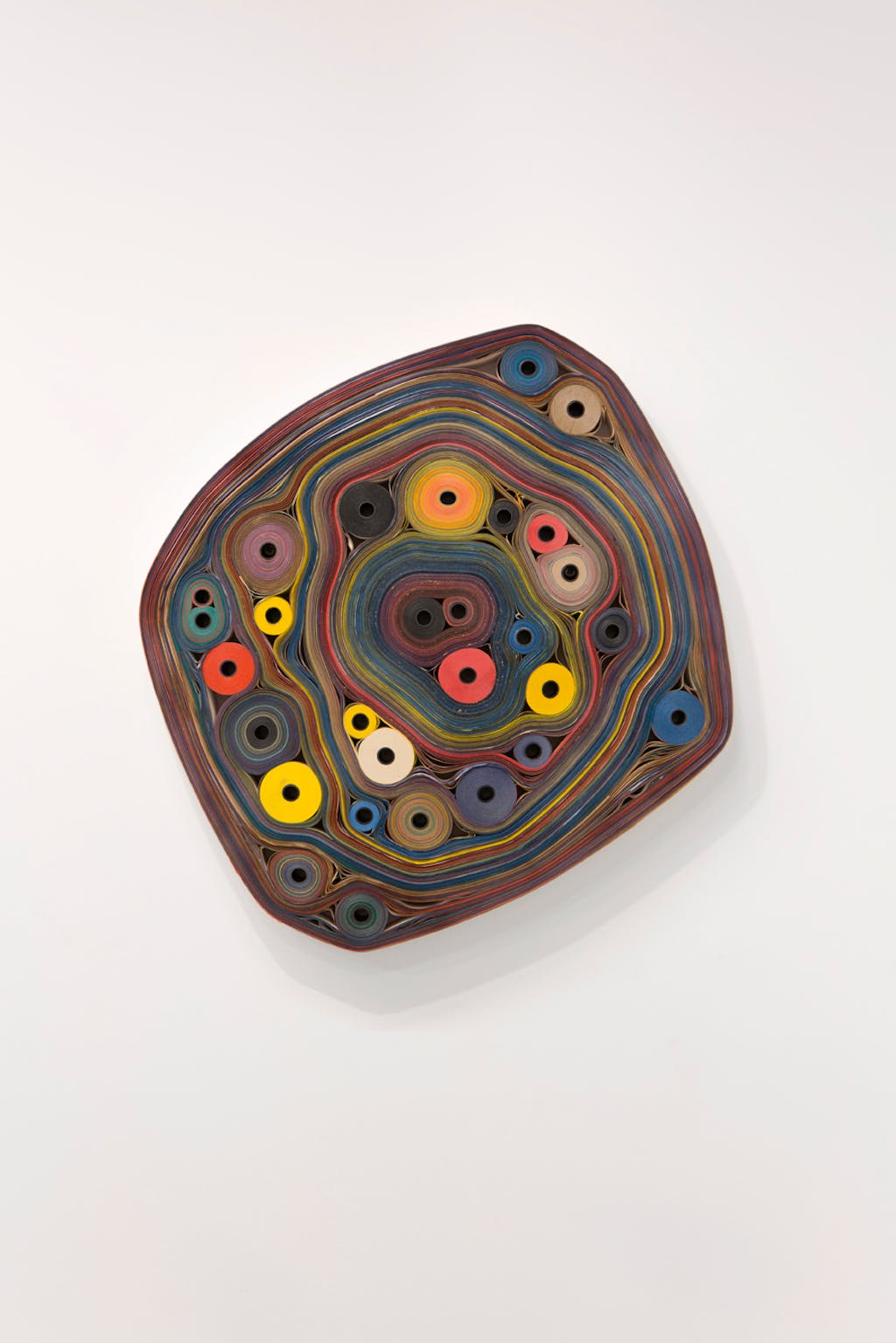