Kamel Mennour is pleased to present François Morellet’s first solo show at the gallery.
A major figure in art for the last five – almost six – decades, François Morellet has been one of the leading exponents of the renewal of geometric abstraction in the second half of the twentieth century. As part of the continuation of concrete art – he discovered the work of Max Bill during a trip to South America in 1950-51 – his research was consequently able to absorb ornamental details from the Alhambra in Grenada, which he visited in 1952. This duel inheritance favoured the establishment of a so-called “systematic” syntax, which the artist has gone on to demonstrate tirelessly, relying on a multitude of materials and procedures. These have borne witness to innumerable revivifications, but also to the questioning of the theoretical principles devised by the artist in the 1950s, notably as part of the G.R.A.V. (Groupe de recherche d’art visuel). Indeed, throughout his career, the artist has never ceased to distance himself from the restrictions of this framework in order to commit himself to the renewal of its foundations, with intuition and an acute sense of (auto-)derision. Light is one of the materials for which he has a predilection, first using it in 1963 in the form of electric light bulbs and later on, neon lights. The malleability of the latter has allowed them to take on a wide range of geometric constellations, thereby firmly establishing them as a continuation of his pictorial productions. His use of horizontals and verticals, diagonals and curves has, over several decades, fed a repertoire of familiar shapes that the artist has expanded and reinterpreted, with often unpredictable results. For the last twenty-five years, the work of François Morellet has freed itself up remarkably, ending the often deceptive asceticism of his youthful periods. From the 1980s onwards, the puritanical past has been succeeded by a series of “outbursts”, as if, after a period of self-containment, albeit one softened by the occasional digression, he has felt the need to liberate the “body” of his work. The works presented at galerie Kamel Mennour are emblematic of this liberation. Dark Light light blue, presented at the rue Saint André des Arts site, brings together neon lights and paintings in a juxtaposition of two materials regularly confronted by the artist. As for Neons by accident (2003) installed at no. 60, rue de Mazarine, these seek to establish a dialogue with their architectural environment. Such a wealth of possibilities reflects the inexhaustible character of his “luminous” research, undertaken since the beginning of the 1960s. 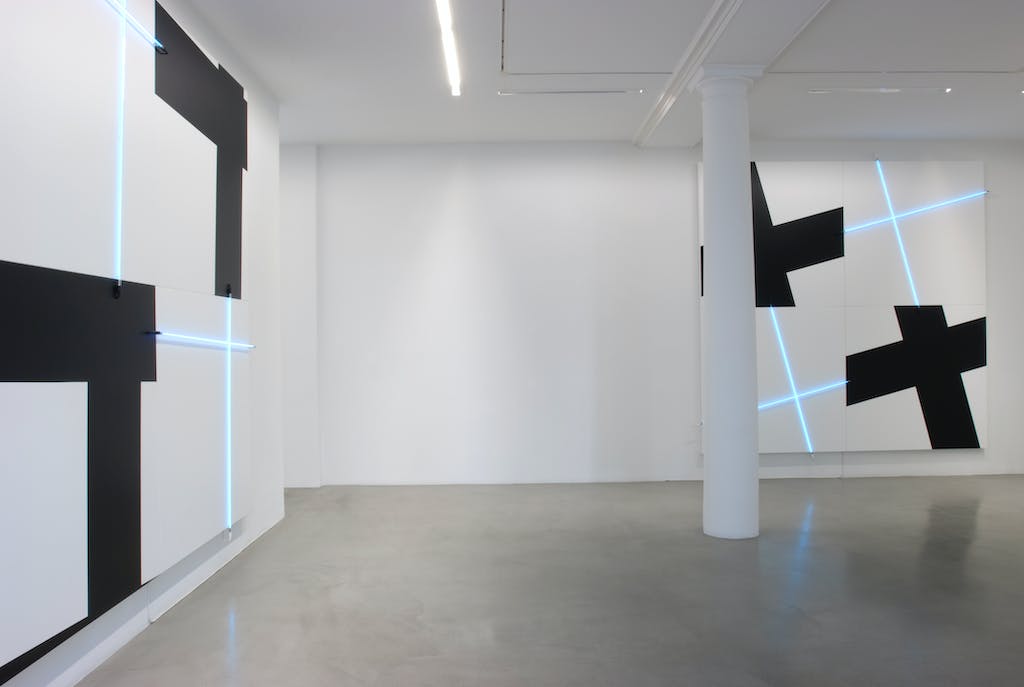 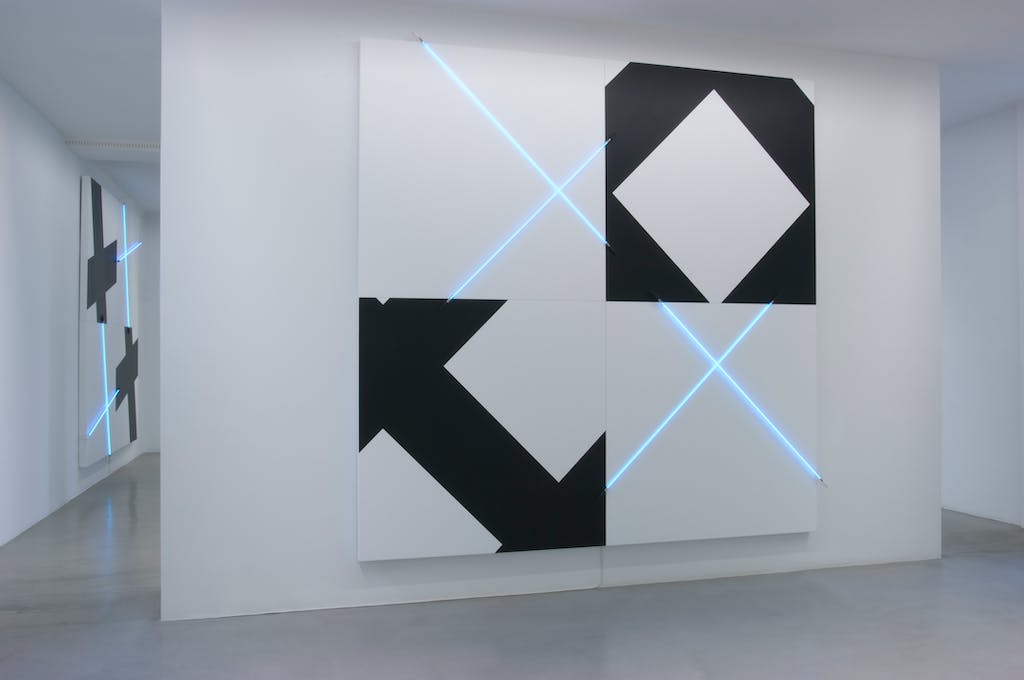 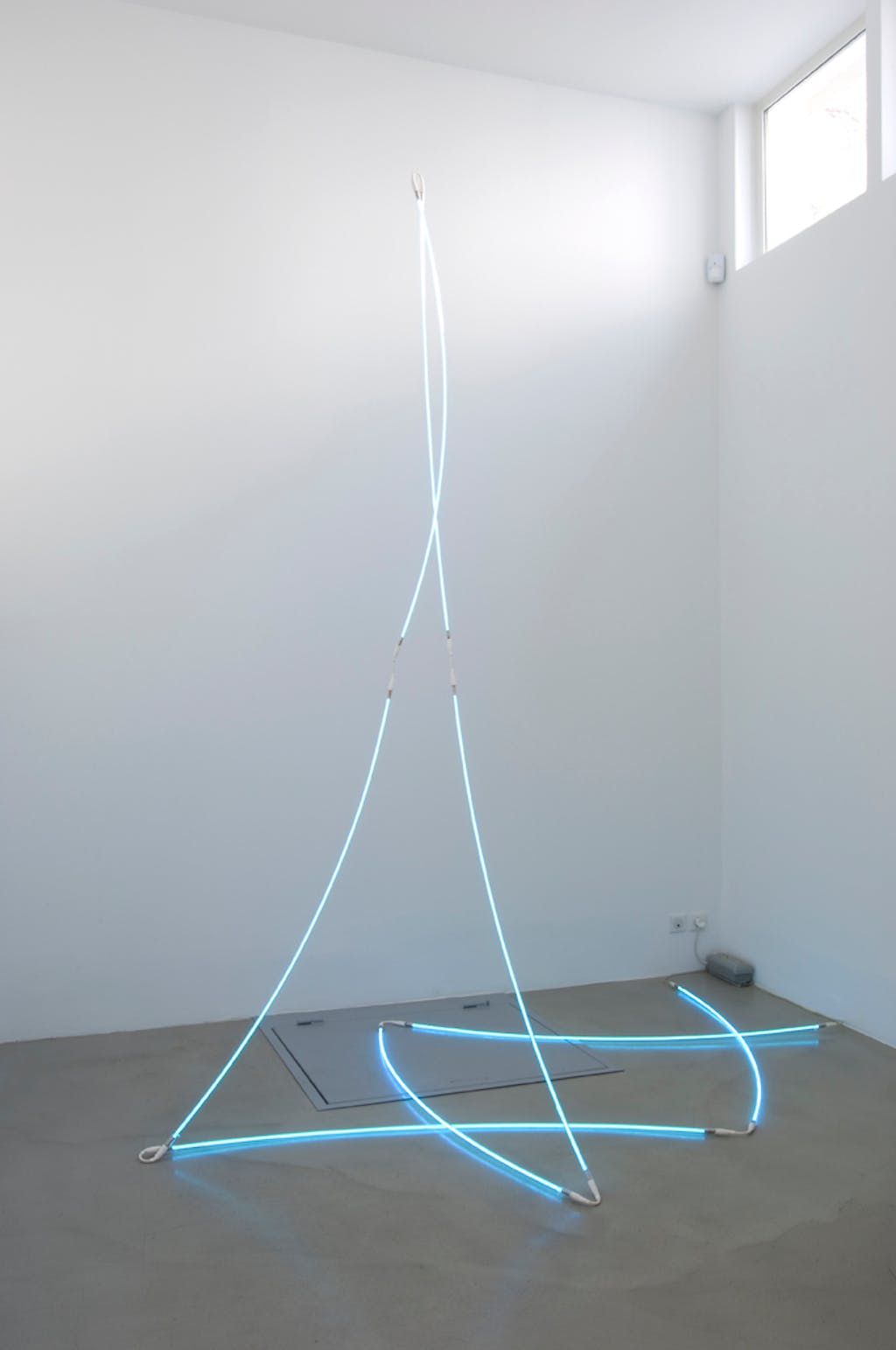 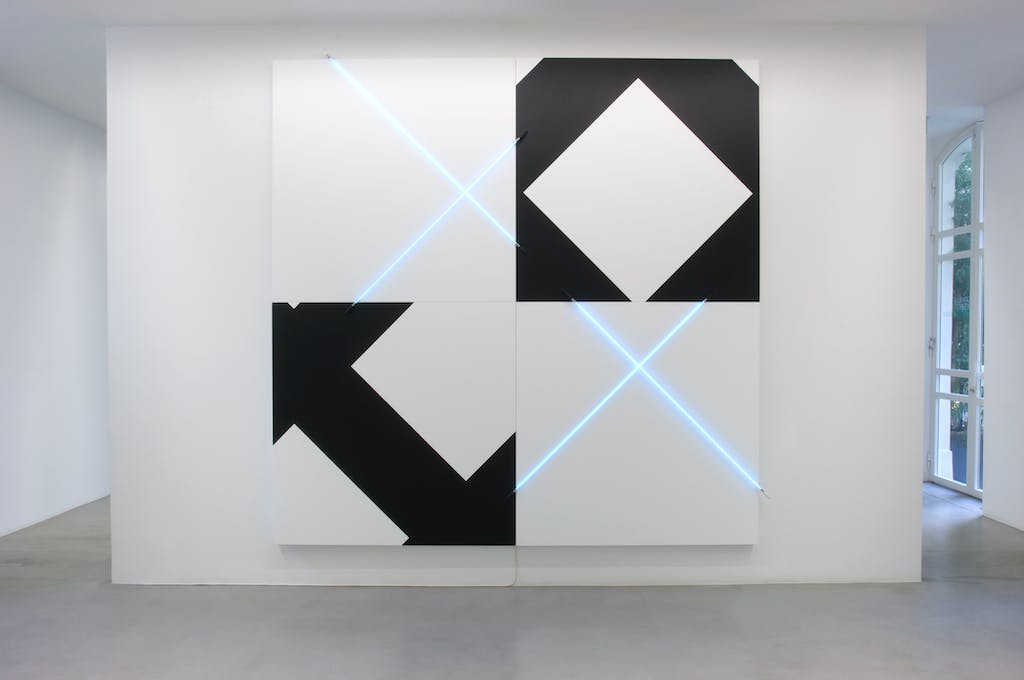