Bugarach is the name of a village in the French Pyrenees and of the mountain
peak that dominates upon it, called “the upside-down mountain” because of the
geological feature that has made it a natural curiosity: its lower layers are more recent than its upper ones. Since the 1970s, Bugarach – a hamlet with barely 200 inhabitants – has been a place of pilgrimage for numerous followers of New Age esotericism. The site has recently become an extremely popular destination due to a belief that the peak is the only place that will be spared when the ‘end of the world’ comes. According to certain readings of the Mayan calendar, this is supposed to occur on 21st December 2012. This apocalyptic prophesy – or rather the numerous theories of the ‘great transformation’ or the end of the cycle, put forward by the esoteric or ‘fringe science’ theorists – has largely been refuted by Mayanists. However, it has gained ground thanks to the regular influx of new inhabitants, pilgrims or the simply curious who come from all over the world. The peak of Bugarach has been duly credited with various extraordinary powers. In particular, it is considered to be much frequented by aliens. It supposedly contains a central cavity – a hiding-place for UFOs, or even the matrix of a supernatural electromagnetic field that supposedly prevents planes from flying over it. The different mystical practices observed recently at Bugarach allow us to glimpse the syncretism of eastern, pre-Columbian or Amerindian wisdom and rituals, mixed in with a few conspiracy theories. The international media are now flocking to Bugarach in search of images of the weird, and are volubly spreading rumours about the threat of deranged sects, happily fuelling them in turn.

In our globalised society, where the loss of religious feeling has coincided with the rise of new extremisms, the resurgence of these New Age spiritualities as a fantasised cataclysm approaches is not insignificant. It is not surprising that Huang Yong Ping has seized on this phenomenon, having spent several years pertinently highlighting the ambivalent role of all religions in his monumental installations (Les Mains de Bouddha [The Hands of Buddha], 2006; Construction Site, 2007; Caverne 2009, 2009). The present exhibition has been conceived in conjunction with another installation, Cirque, being shown simultaneously at the Barbara Gladstone gallery in New York. Connected in time, they are also close to each other in theme: the end of time, or, more precisely, the time of the end.
On entering the gallery, we are immediately struck by the emptiness of the first
room. There is an alarm system hanged on the roof, a defensive object, but also a threatening one, which we fear will go off unexpectedly. It is once we have
entered the second room that we discover the bodies of numerous animals –
sixteen in total – of various different species, which have the dual peculiarity of being completely white, and headless. Spread out, walking in all different
directions, they are evidently disorientated.

By a strange effect of imbalance, the smaller room, contrary to the first space,
has been invaded by an enormous nine-metres-long mass, like a giant rock that has violently emerged from the earth. Walking around this ‘miniature’ replica of the Bugarach peak, we discover a large white plate, four metres diameter that
seems to have lodged in, or is perhaps emerging from the mountain. Partially
embedded in the rock, on its sloping surface we find the heads of the sixteen
wandering animals, all raised towards the sky. With eyes wide open, their gaping
mouths seem to be contemplating, defying, or perhaps pleading with a
helicopter flying overhead, positioned directly above them. It appears to be
searching for a place to land, something it us unable to do, the whole landscape
being steep and uneven. A cruel drama is played out in this interminable
confrontation between the animals, seeking salvation, and the helicopter, which
could either represent a threat to them, or a source of hope.The animals’ white coats recall the colour religious groups or cults often choose for their habits; it is the colour of purity and indoctrination. The helicopter is a machine symbolic of surveillance and control – corollaries of the need for protection that pervades the whole of society. It also recalls the American spyplane
that was the subject of Projet chauve-souris [Bat project] (2000-2005),
which Huang Yong Ping compared to a large, empty shell 1, thereby denouncing
the illusory nature of all systems of control. So it is that the entire exhibition hints at a scene of chaos, where references of scale are continually thwarted, and the balance of power between the natural and the artificial, the wild and the social, is disrupted. Here, it is not the mountain that is turned upside down, but instead the bedrock on which the earthly creatures rest, powerless. The ‘flying saucer’ captured mid-flight, frozen in its instability, invites us to see this scene as the apogee of the drama, the paroxysmal
tipping-point.

In Huang Yong Ping’s work, animals repeatedly take on the metaphorical role of
human behaviour. Here, the headless animals doubtless have the same role as the
living insects in Théâtre du monde [World theatre] (1993) – that is to say they
play out the final act of a comedy of cruelty, of which we are simultaneously the subject and the audience.
In Arche 2009 [Ark 2009] (2009), stuffed animals are placed at the heart of a
set-up where the notion of protection is merely an illusion, as the artist explains in the catalogue written for the occasion: “as soon a crisis arises, we always have the delusion that there is an ‘ark’ (…)” 2, in other words, an intact haven, while all the time the real danger comes precisely from within society itself, from its irreducible share of chaos. So it was that, while researching the current exhibition, Huang Yong Ping noted: ‘Bug-arach / Bug-ark’.

If the theories of the ‘end of time’ and the belief in Bugarach as a haven can seem anecdotal or risible, Huang Yong Ping here reminds us that reality is nonetheless unstable. By elevating this contemporary event to the level of monument, he reduces the inherent temporal differences between the political event and the work of art, thereby suggesting that one is never far from the other. By conferring on the subject a wider symbolic bearing, symptomatic of a generalized loss of direction, he seems to indicate to us that the world as we know it is more uncertain than ever, and that the disarray is entirely real, as much on a social level as an environmental one., The myth concerning the ‘end of the world’ here resonates as the symptom, the visible part of a destructive venture of which we are unable to determine either the cause or the remedy, at least while the body and the head remain separated.

On the occasion of lille3000, Huang Yong Ping is currently the subject of a solo
exhibition at the Musée de l’Hospice Comtesse (until January, 13th); and a further solo exhibition will take place in the MAC – Musée d’art contemporain de Lyon from February 15th to April 14th. 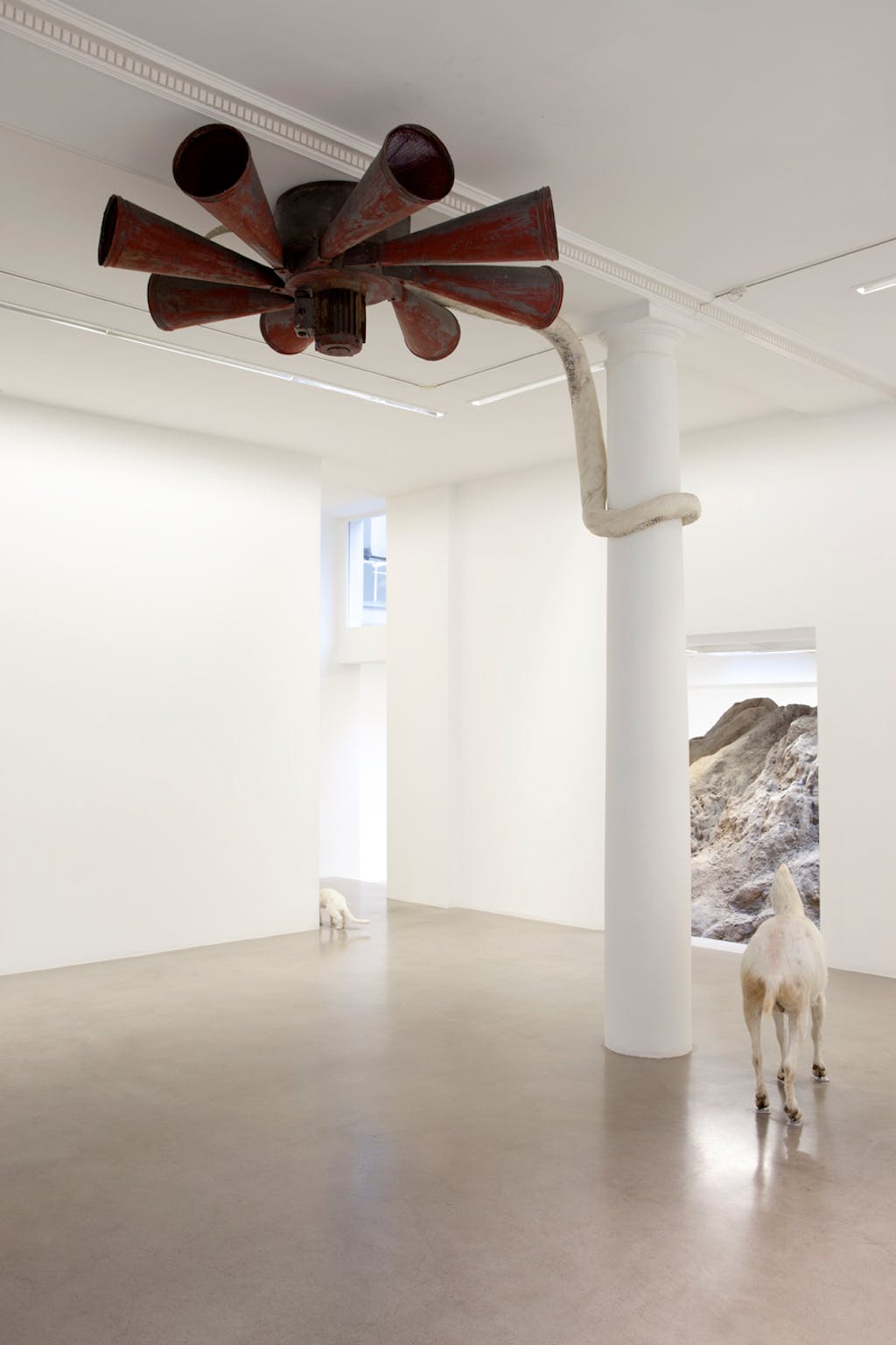 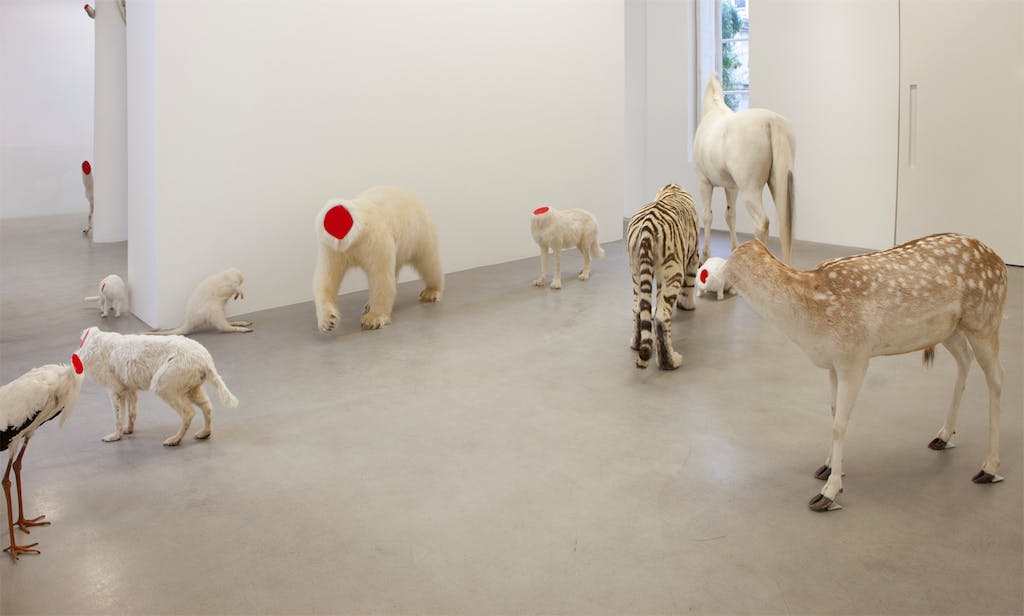 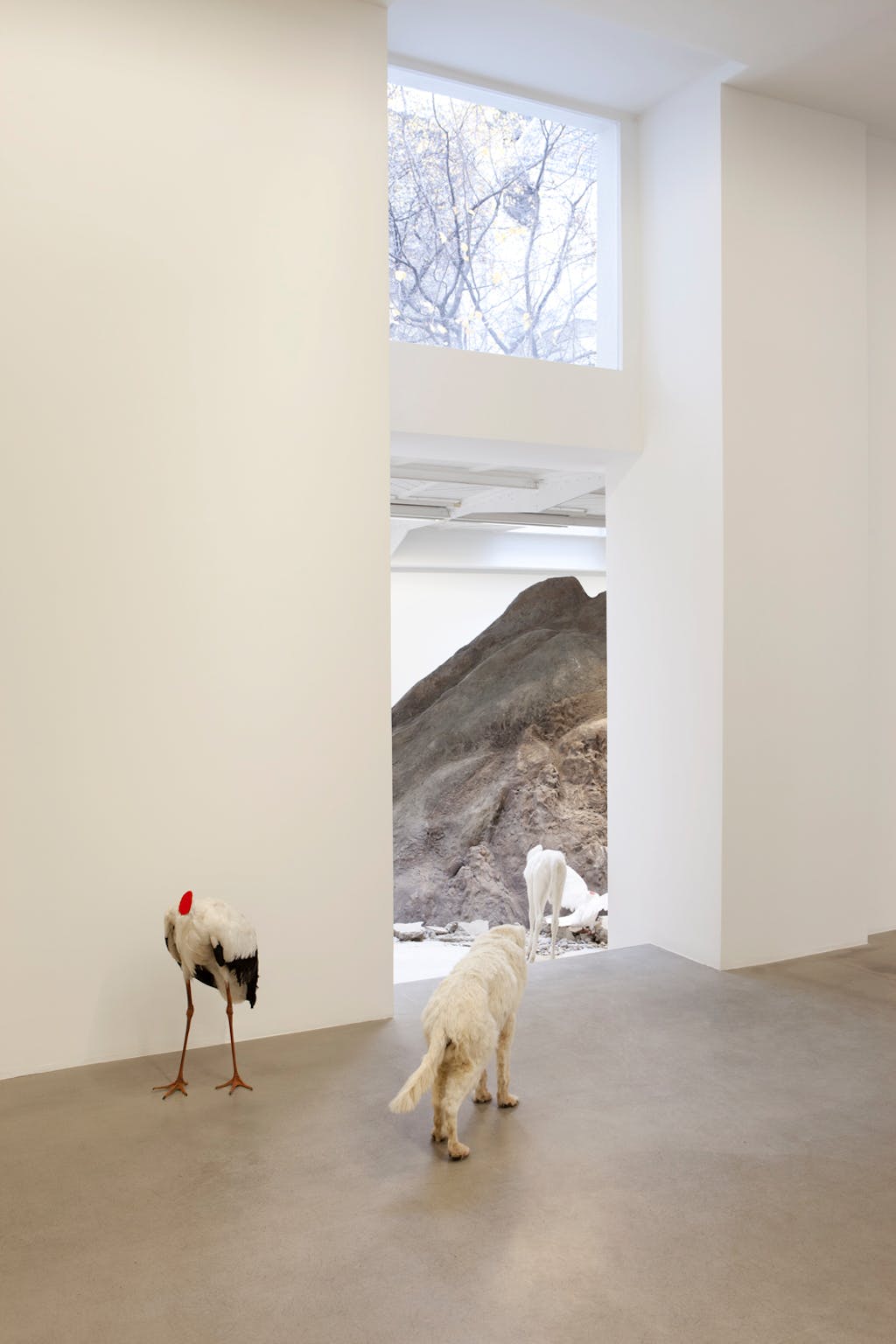 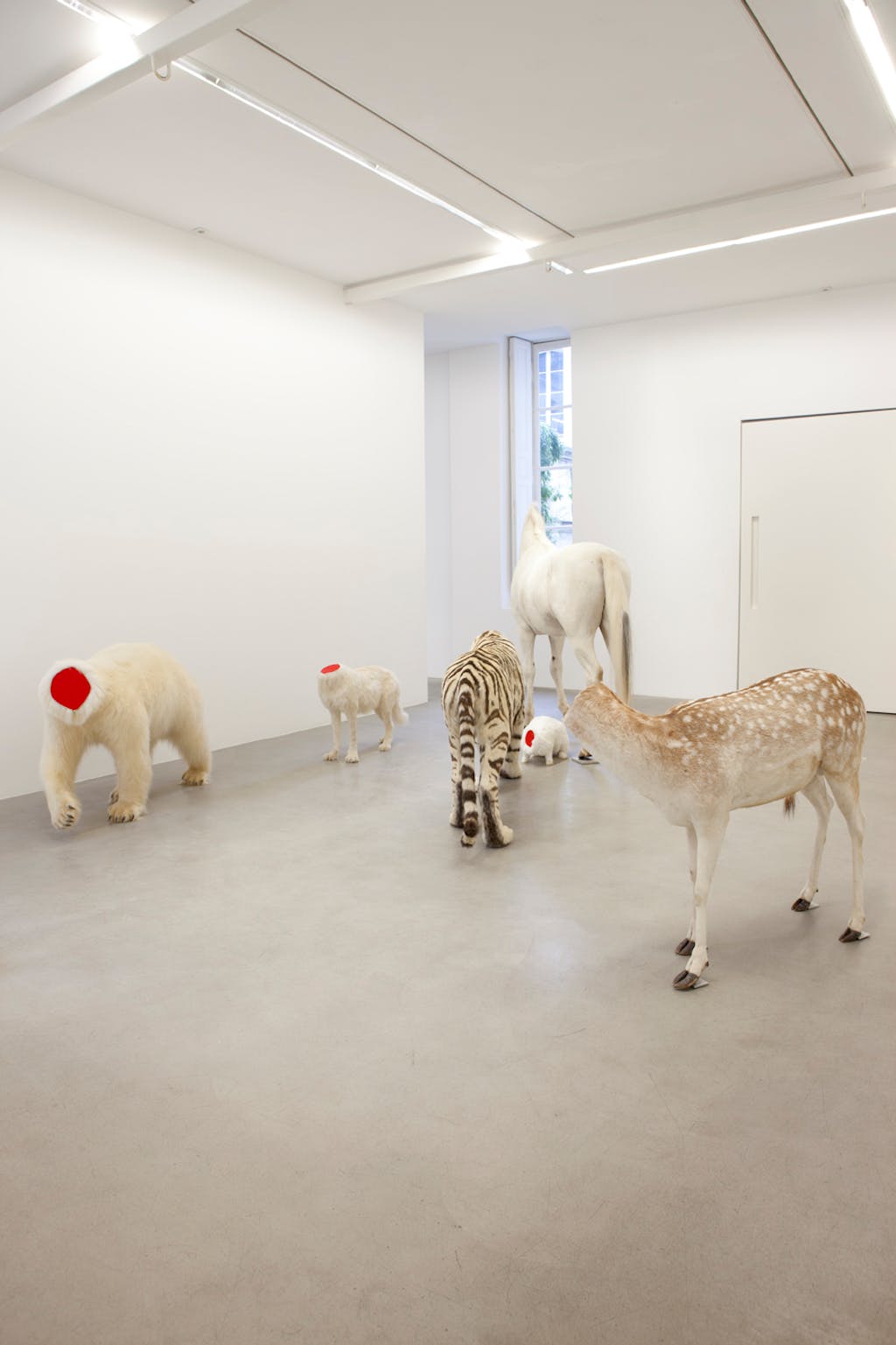 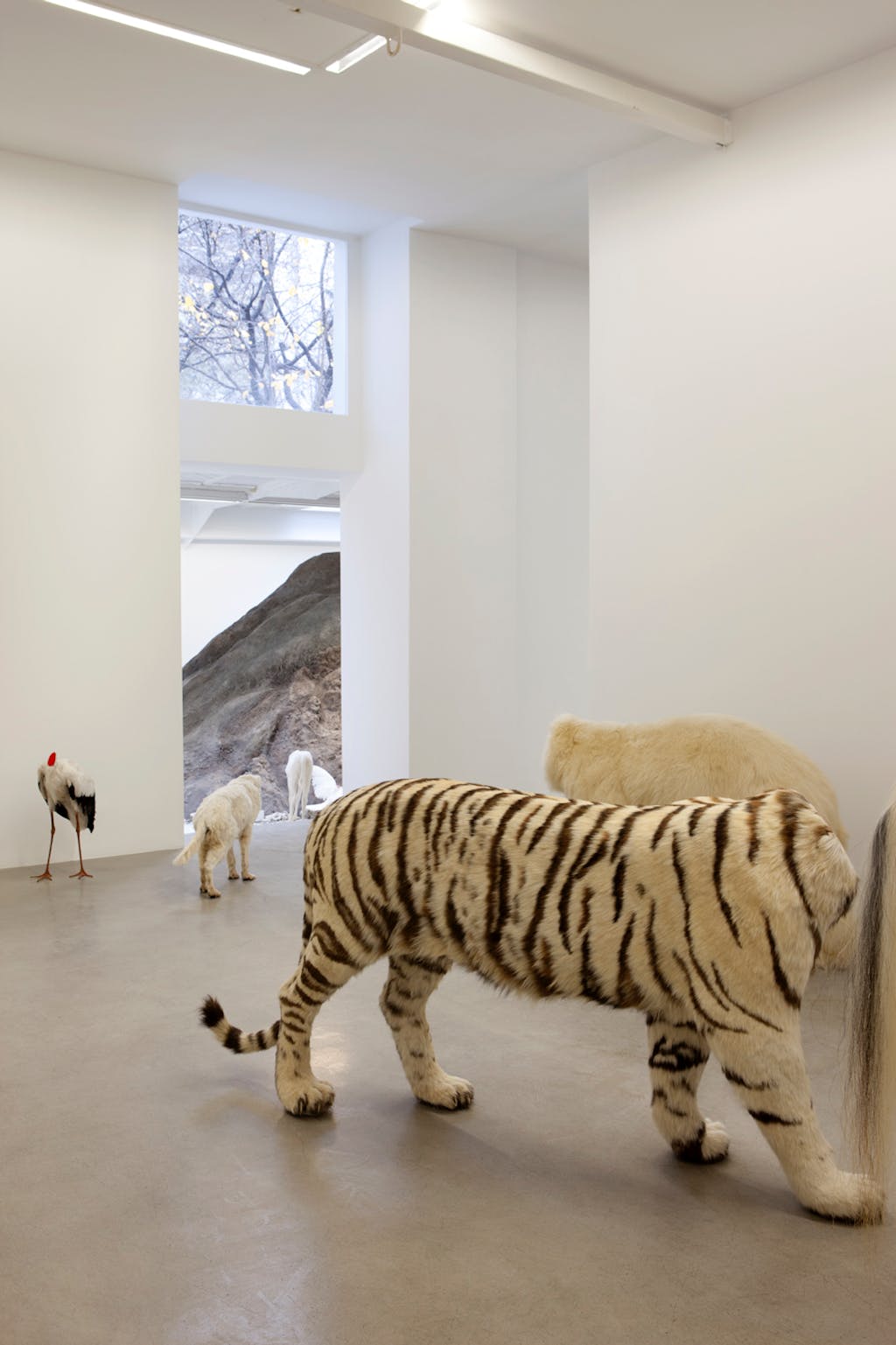 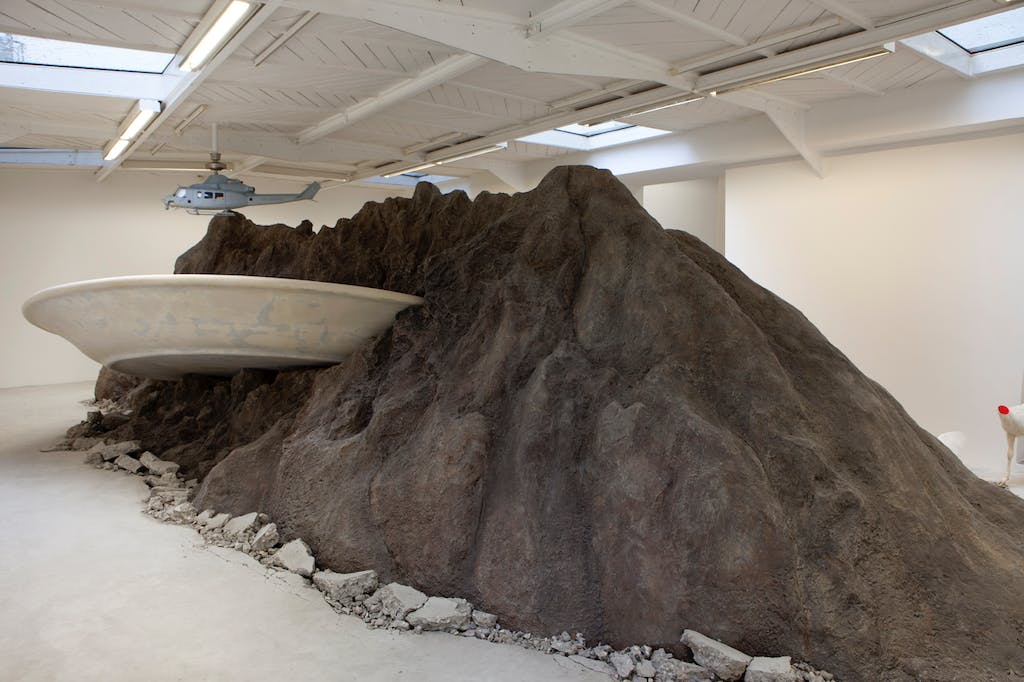 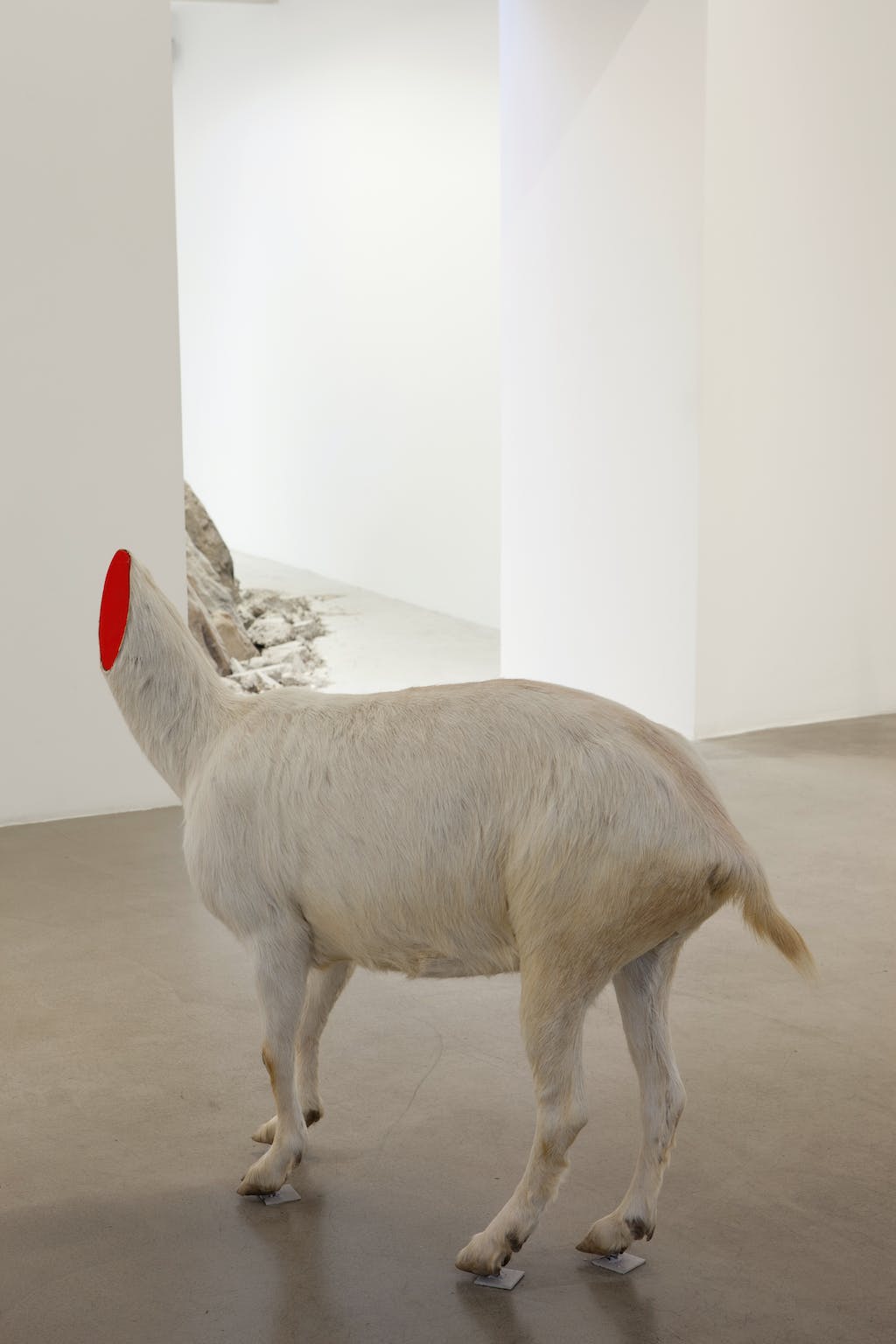 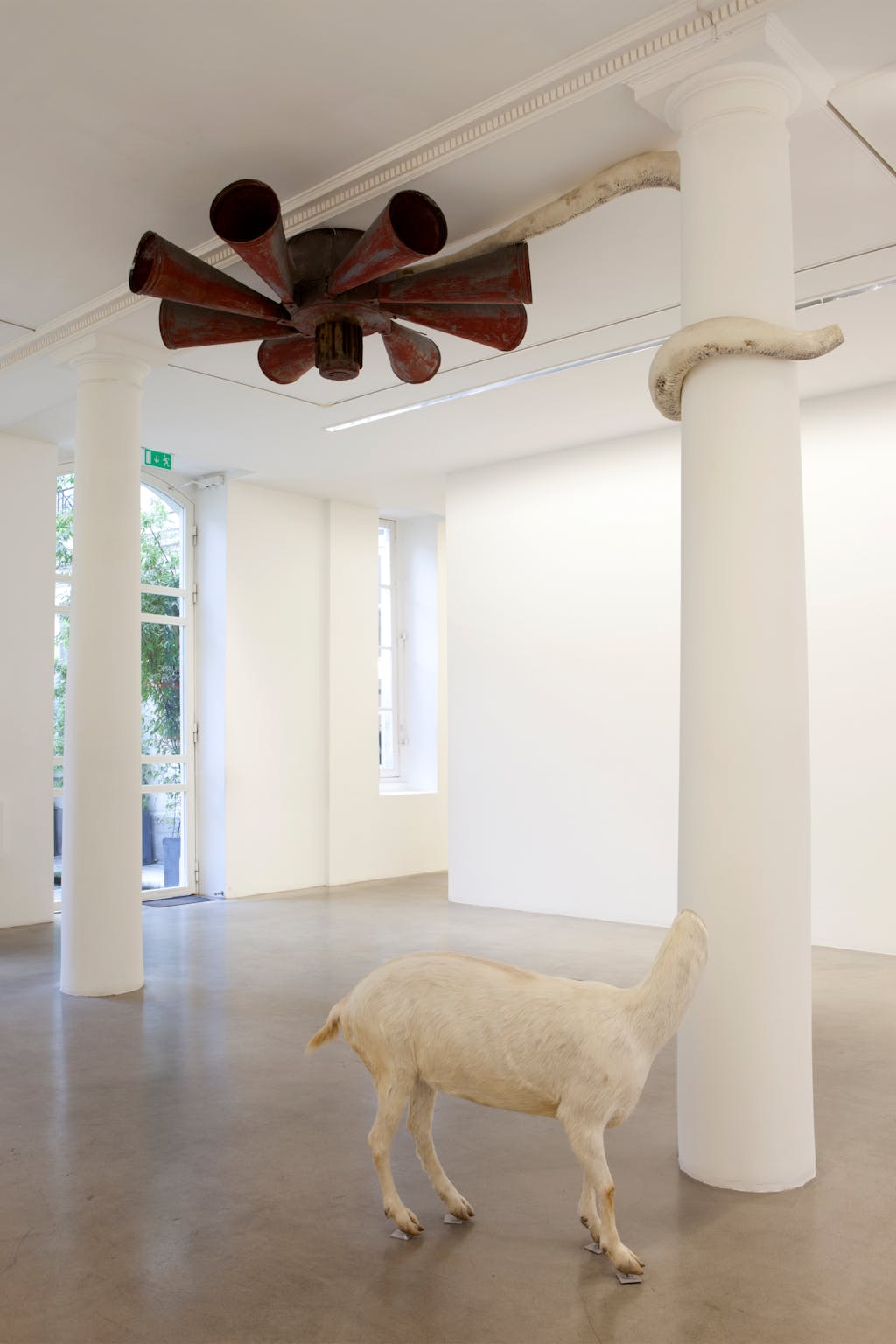 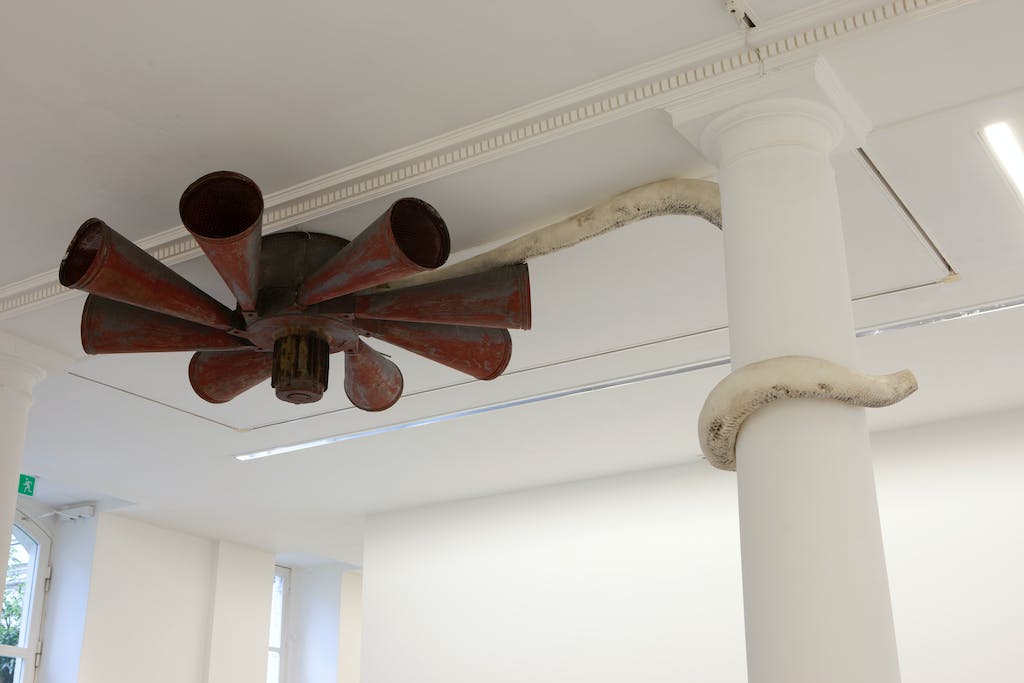 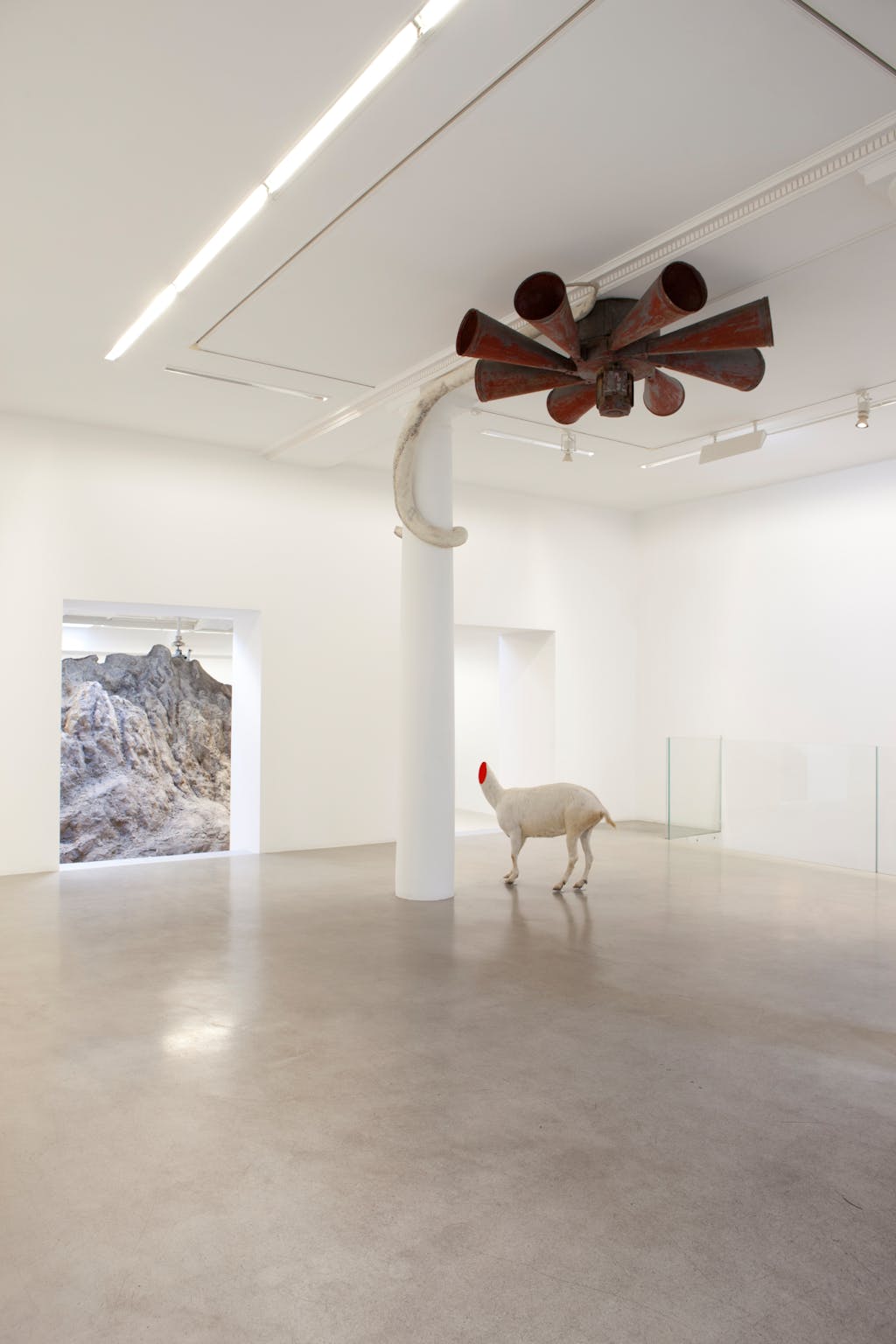 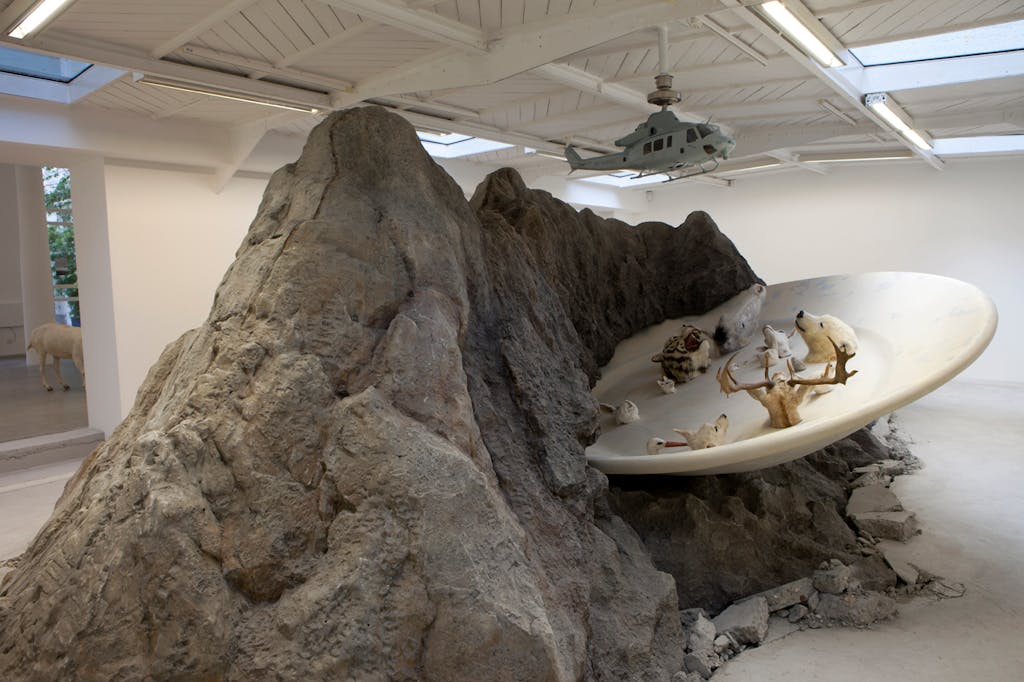 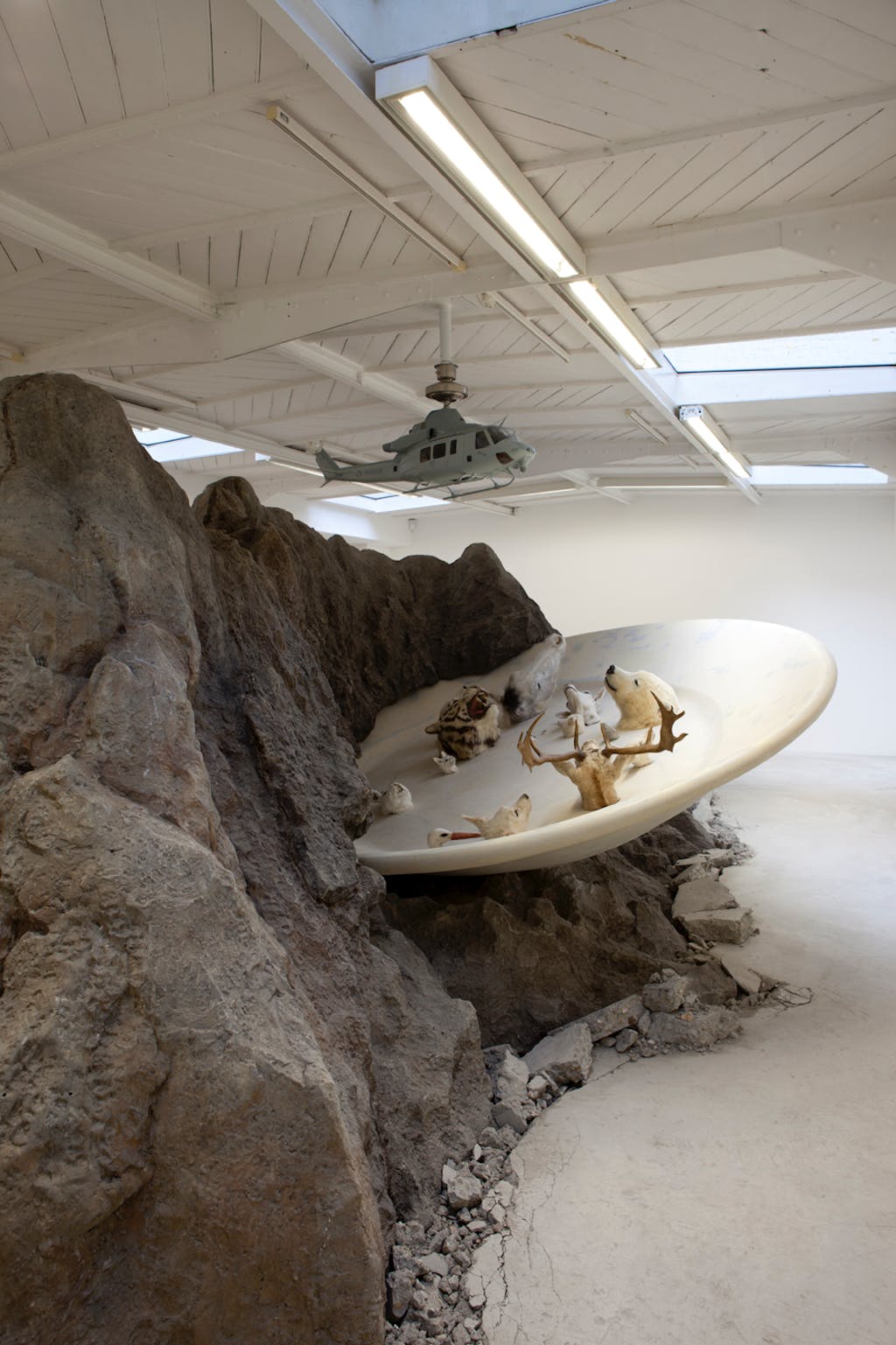 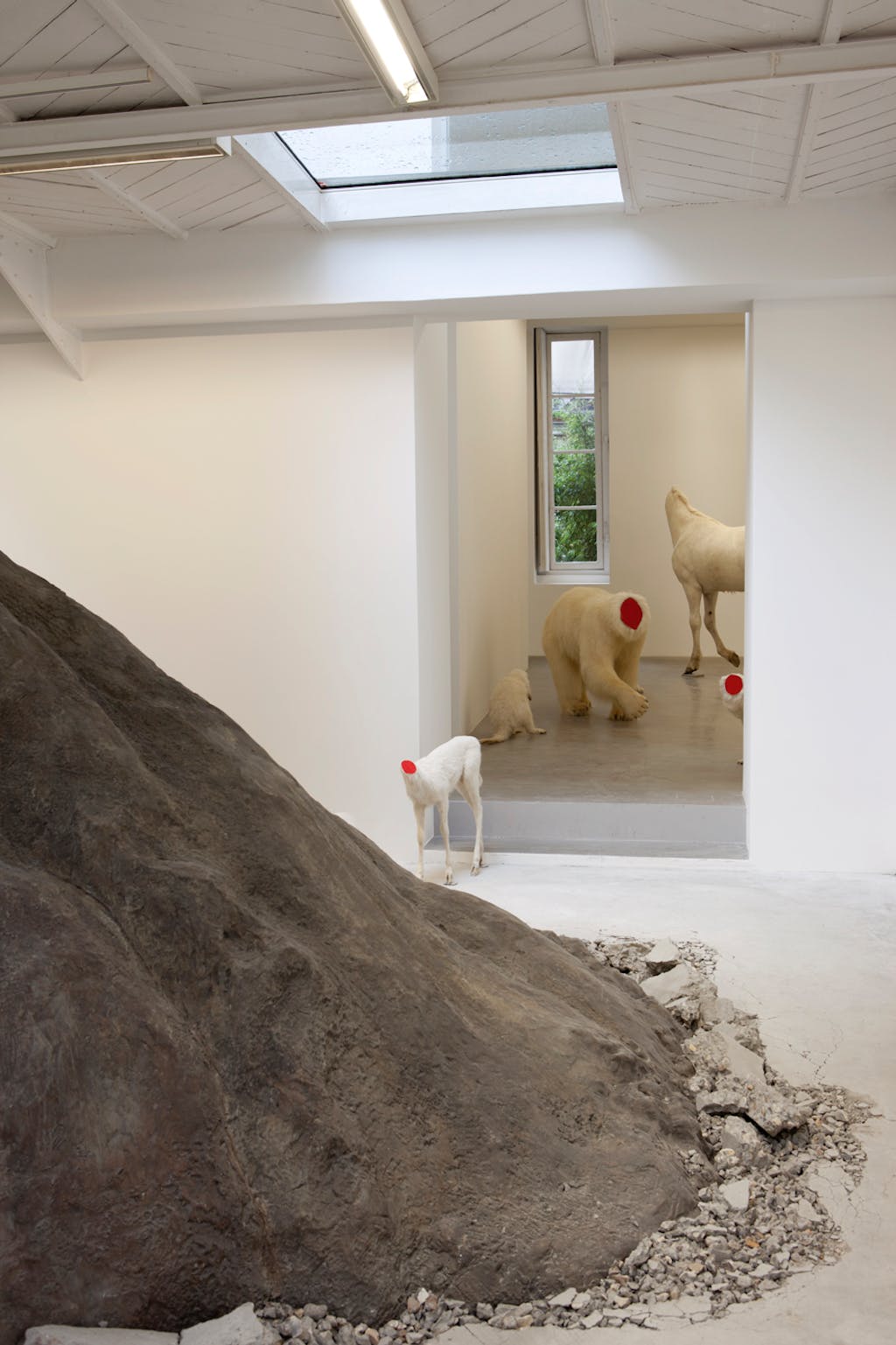