Life is an experimental journey undertaken involuntarily. It is a journey of the spirit
through the material world and, since it is the spirit that travels, it is in the spirit that
is experienced. That is why there exist contemplative souls who have lived more
intensely, more widely, more tumultuously than others who have lived their lives
purely externally. The end result is what matters.
What one felt was what one experienced.1
Fernando Pessoa
Consciousness needs force, unity, and independence. The works of Ann
Veronica Janssens elude this desire for mastery and invite each of us into the
troubled waters of psycho-sensorial journeys through space and light. After
the coloured, immersive mists of Fantazy in 2013, the galerie kamel mennour is
pleased to present Janssens’ second solo show. This time, a triptych of iridescent
glass panes has been set against the walls of the gallery on the Rue du Pont
de Lodi. They are entrances into a subtle world where diffractions, reflections,
and iridescences stimulate the intimate, unconscious magma of our thoughts.
They trigger a series of sensations, colours, and perceptive associations like
those running to infinity over the circle of gilt brass lying on the floor (Sans titre,
2013). The circle traces out a border that each of us is invited to illuminate in
our innermost being (sacred-profane, in-play-out-of‑play, same-other…).
Further on in the second space, under glass, Ann Veronica Janssens has, with a
swipe of her heel, dispersed a little heap of sequins into a glimmering, iridescent
lake. The fragments flash out in myriad directions. Pégase produces an infinity
of emotions, even inspirations, continuing to modify under the changing
aspect of the lights. Indeed Janssens’ dig of her heel frees up inspiration in
the same way the mythological winged horse gave birth to the spring of the
nine muses with a blow of its hoof… And all the senses are solicited. A audio
headphone pair will let you hear the work Untitled (sons infinis) that Janssens
made in collaboration with Michel François in 2009: a hollow, multiplied
sound, superimposed over a series of descending octaves. Hearing pulls the
body into an infinite falling motion. This auditory illusion produces a visceral
sense of vertigo, like a labyrinth of temporal dissonance. Sound and light waves
mix vibrations.
As is often the case with Janssens, the exhibition is created as the visitor walks
through it. She introduces her space and exists according to each visitor’s
experimentation. She requires sight as much as the body. Janssens has put
in place the conditions for a hypnotic moment. Not a spectacular lulling to
sleep but a diffuse feeling, like the state between sleeping and waking, when
the familiar folds of the bedroom curtains take on strange and intriguing
forms. She causes us to penetrate into the complex phenomenon of our
perception, where sensation, memory, and fantasy combine to carve out new
forms of existence and thought. Of course these will end up getting fixed.
Consciousness, with its will to power, will endlessly redraw the boundaries,
build up evidence, and mark out enclosures. But Jannsens’ works will always
come to fluidise these topographies of certitude, experimenting with the
permeability of contexts, whether architectural, social, cultural, or political…
The world is not defined once and for all, for the real cannot be accessed
outside of the dimension of fantasy, and hence the imaginary. Ann Veronica
Janssens thinks sculpture as a place of perception. Consequently, the tools
and the palette of her works are an evolving configuration: they depend on
the sensation, the experience, and the singularity of each viewer. Sculpture is
not the object of perception—it is perception that sculpts.
With this, Janssen extends Carl Andre’s founding gesture from 1967 when the
American minimalist created his radical work, 144 Pieces of Zinc, with the zinc
sheets arranged on the floor in rows of twelve. With this piece, Andre posed
the principle of sculpture as situation, as a place from which to look at space
and environment. He said himself that he had broadened the movement of
Constantin Brancusi’s Colonne sans fin (1918-1938) by thinking it horizontally.
No longer directed towards the sky but rather placed on the earth. Ann
Veronica Janssens has unfolded Andre’s initial opening by introducing the
work as the possibility of exploring oneself. Colour plays a primordial role here.
Paul Cézanne’s experience is close by: ‘Colour is the place where our brain and
the universe meet’.2 The glass panes of CL2 Blue Shadow, CL2GN35 Orange,
CL9GN35 Sunset Bright Green create a multitude of iridescent reflections
that shift with one’s point of view. They enliven perception with a palette of
flamboyant colours. They are reflections from the first glimmers of the history
of art when, on the cave walls, shadows danced until they became painted
forms. They also mirror future horizons, where light, at once wave and particle,
dematerialises reality, bringing about innumerable connections.
If light is essentially a spiritual element, Ann Veronica Janssens is not engaged
in such a quest. Her explorations of the world are closer to those of the three
princes of the kingdom of Serendip.3 Like theirs, they are the fruit of a plurality
of discoveries, all born from chance, whether this is in the artist’s studio or in
the world around her. The journey is unpredictable. You are required to get
underway to ‘awaken powers dormant in ordinary vision’.4 The world is there,
Ann Veronica Janssens’ works invite us to discover it.
Annabelle Gugnon 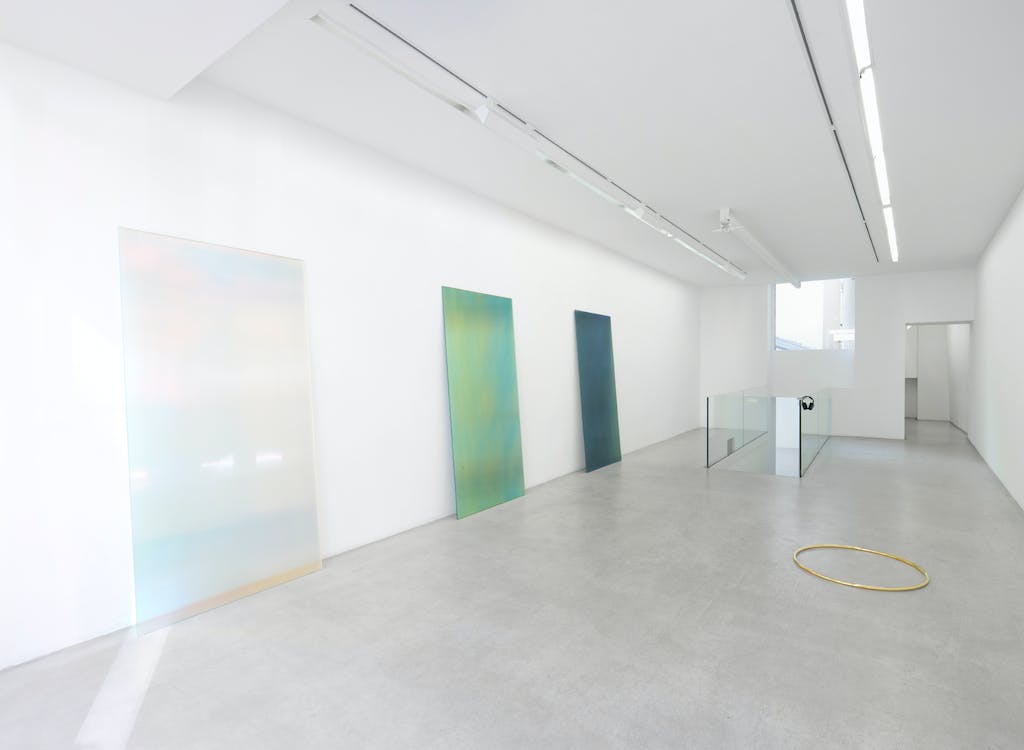 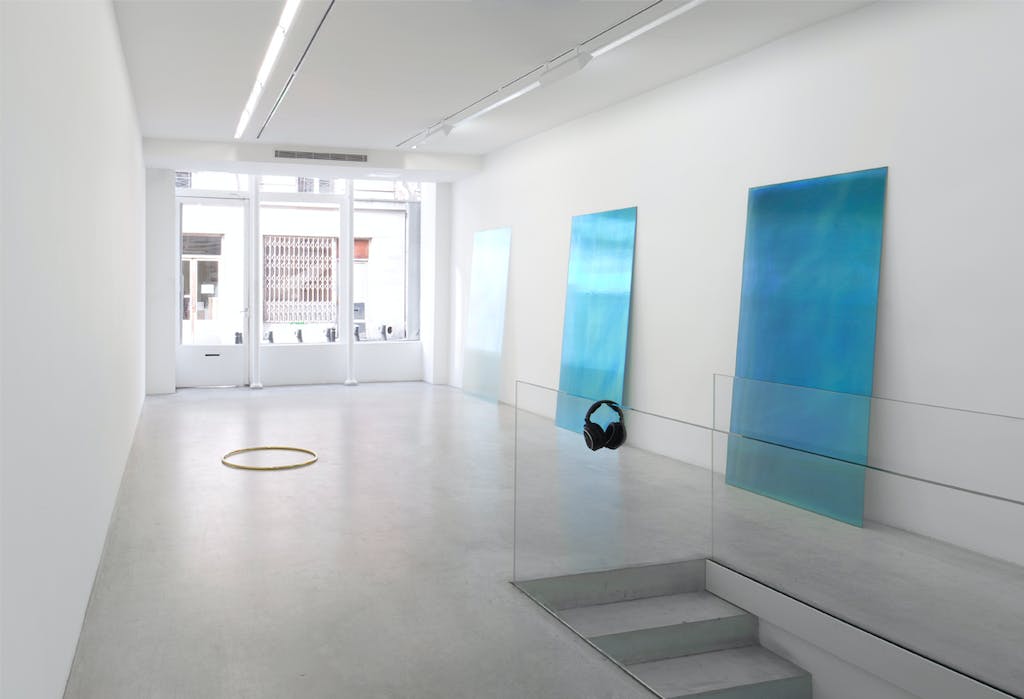 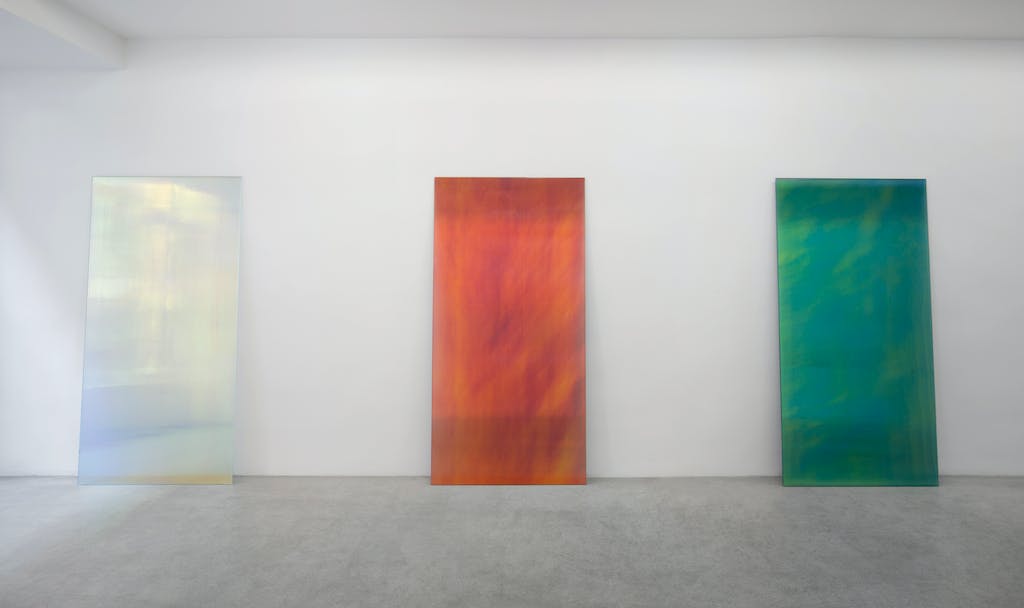 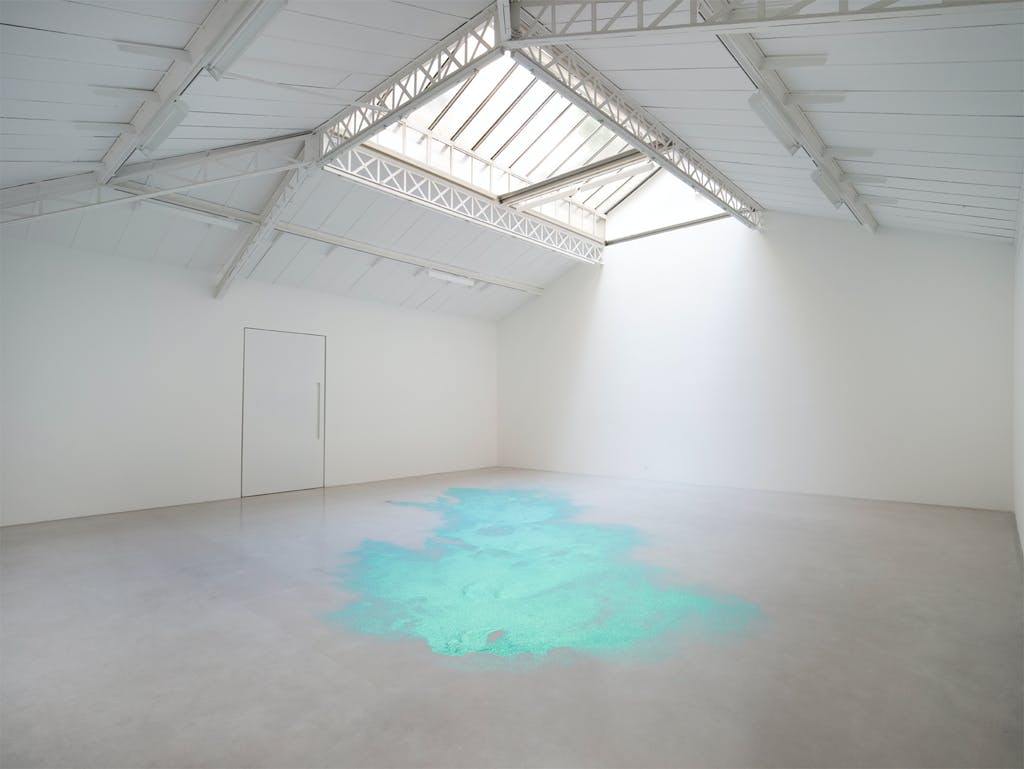 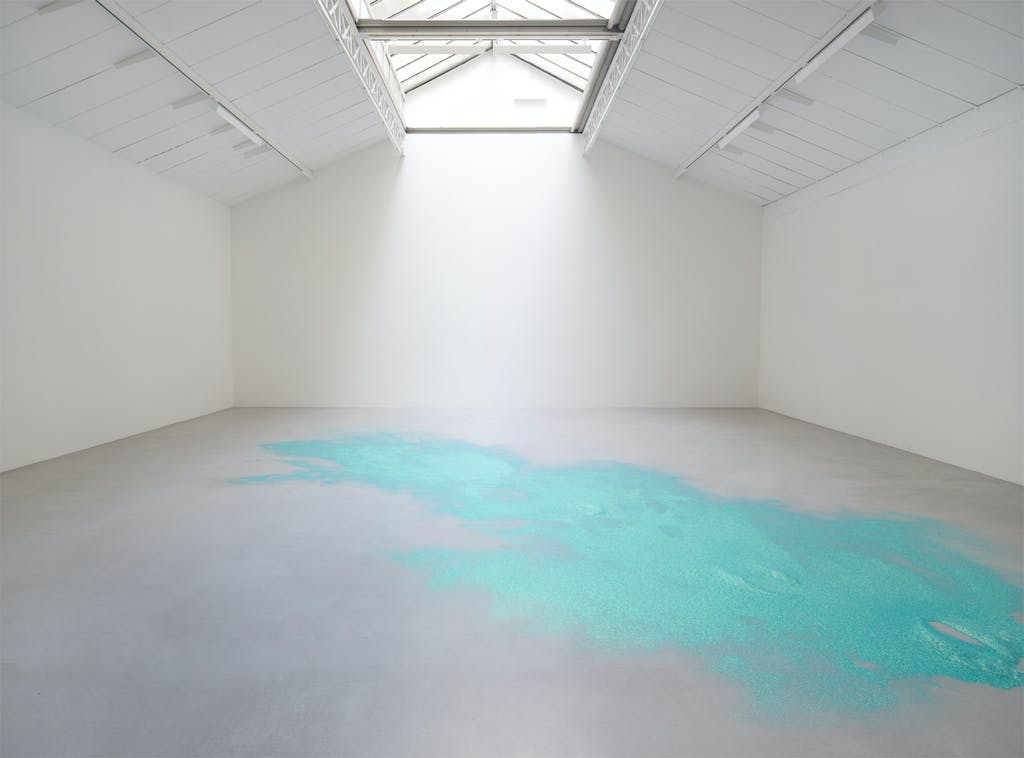 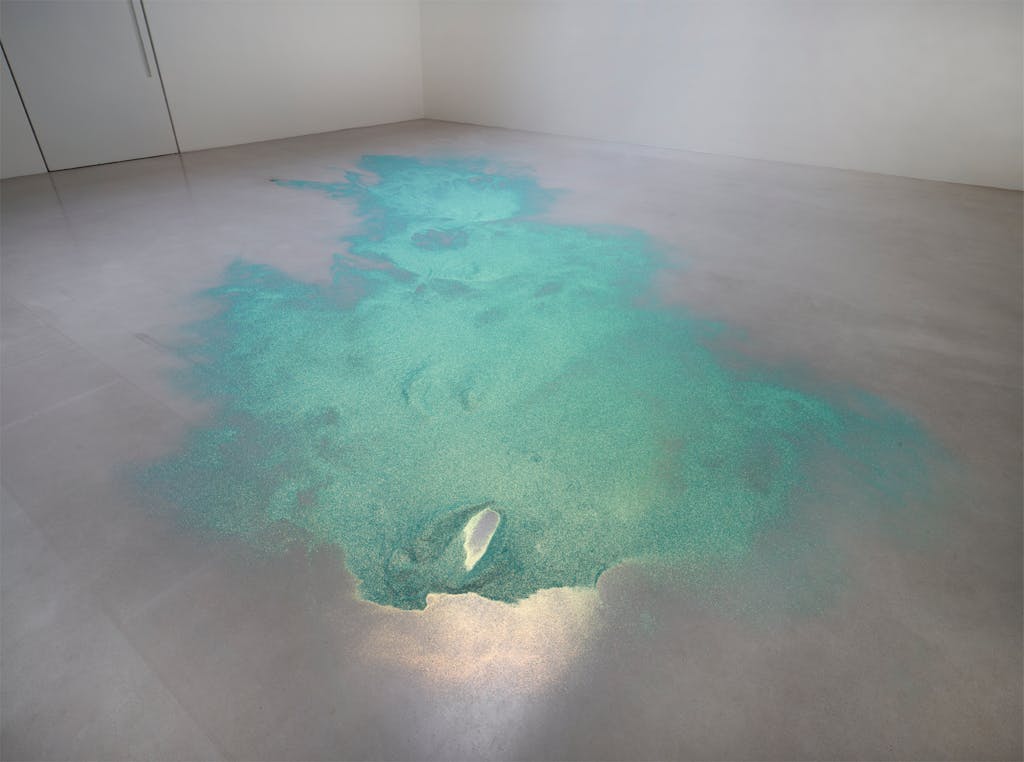 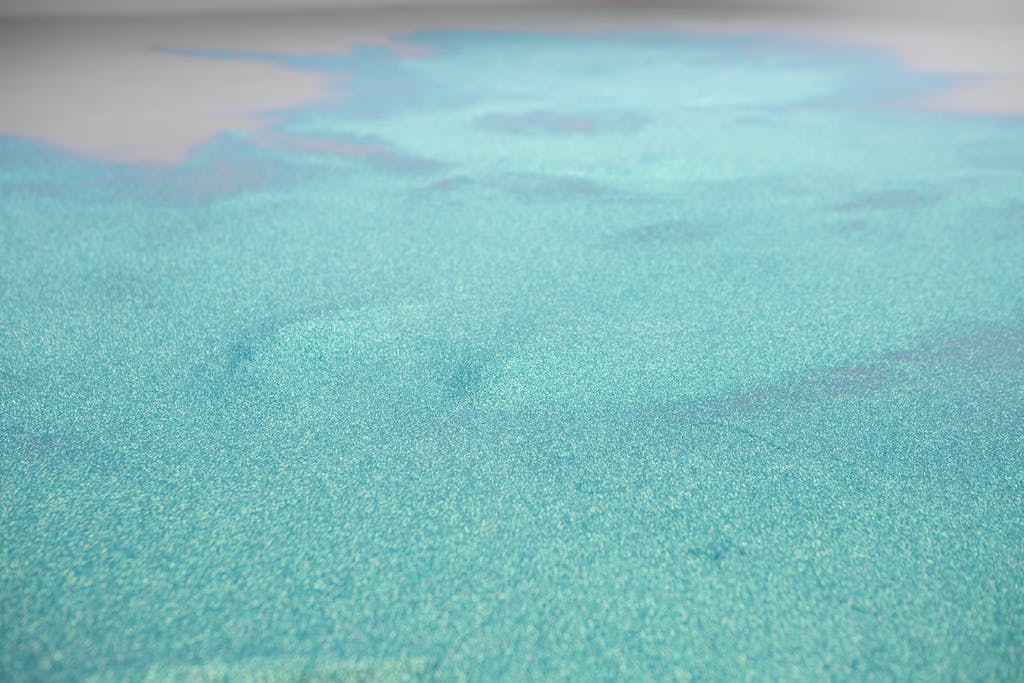