The guiding principle of Activations, Hicham Berrada’s second solo exhibition at the galerie kamel mennour, is to make forms emerge, encourage them to appear rather than represent them.
Hicham Berrada defines his practice as that of an energy director (in the sense one speaks of a stage director), whose creative gesture consists in a choice of physical and chemical parameters: to act on the temperature, the light, or the viscosity of an environment, so that, within a defined frame, something is produced.
What is given to the viewer to see in this frame are forms of activated nature, generated rather than represented forms. The circular video installation is a part of the series Présages, which the artist has been working on since 2007. The Présages, made from chemical substances submerged in beakers or aquariums, are composed according to the classical conception of landscape: a human-scale perspective on nature, oriented towards the horizon. A whole palette of components is deployed by the artist according to the colors and forms that he wants to make appear.
The immersive projection plunges the spectator into a universe under construction, at once vast and pullulating. It was made by filming in real time a 10 cm-diameter jar, in which purified mineral components enter into reaction with one another. Both scale and the border between the organic and the mineral are blurred here. We tend to think of the mineral world as fixed, in contrast with animated life. We are incapable of erceiving mineral movement because its temporality extends beyond our own. In conditions chosen by the artist, we discover the metamorphoses of these elements that we normally think of as immutable and inert. Minerals even show themselves to possess a gestural dimension, productive of movements that we think of as belonging exclusively to life. In this chemically activated way, multiple worlds emerge that can evoke at once vegetable life forms, architecture, and surreal or familiar landscapes.
The bronzes from the series Kéromancie, with the wealth and diversity of their forms, are also a basis for the spectator’s capacities for interpretation and imagination, like three-dimensional Rorschach tests. Are they sculptures? Not in the classic sense of the word, since nothing has been sculpted or molded. Keromancy is a traditional divinatory art practiced since Antiquity, which consists in reading the future from the shapes taken by hot wax after it is thrown into water.

The result depends of course on the composition of the wax, the temperature and pH of the water, and the movement with which the wax is immersed. Hicham Berrada has taken up this technique in an effort to control it: the wax is submitted to precise onditions in order to inflect the way its shapes develop. Controlling these parameters is an attempt to orient the future, to influence the course of events so that they become favorable to us. The best predictions are then cast in bronze with traditional lost-wax casting, which has been used in sculpture since Antiquity. Thus fixed in time, these redictions will perhaps outlast the future that they are supposed to predict.
The white sculpture, printed in 3D, is the first one of a series called Augures athématiques. The piece has been generated by combining different algorithms of morphogenesis, the study of the laws that determine natural forms. These algorithms have been determined by scientists, in order to give an account of the rules according
to which organisms develop and take shape. Mathematical auguries thus capture entirely virtual entities, which only exist through digital calculations, but which could be, since their development has been guided by the laws that preside over the formation of matter in our universe. Composed entirely of polygons, they are structured
by a geometry so complex that it ends up appearing chaotic. Mathematic auguries simulate possibilities that outstrip our imagination, hybrids that exist or will perhaps exist, in other times or other places…
Aude Wyart 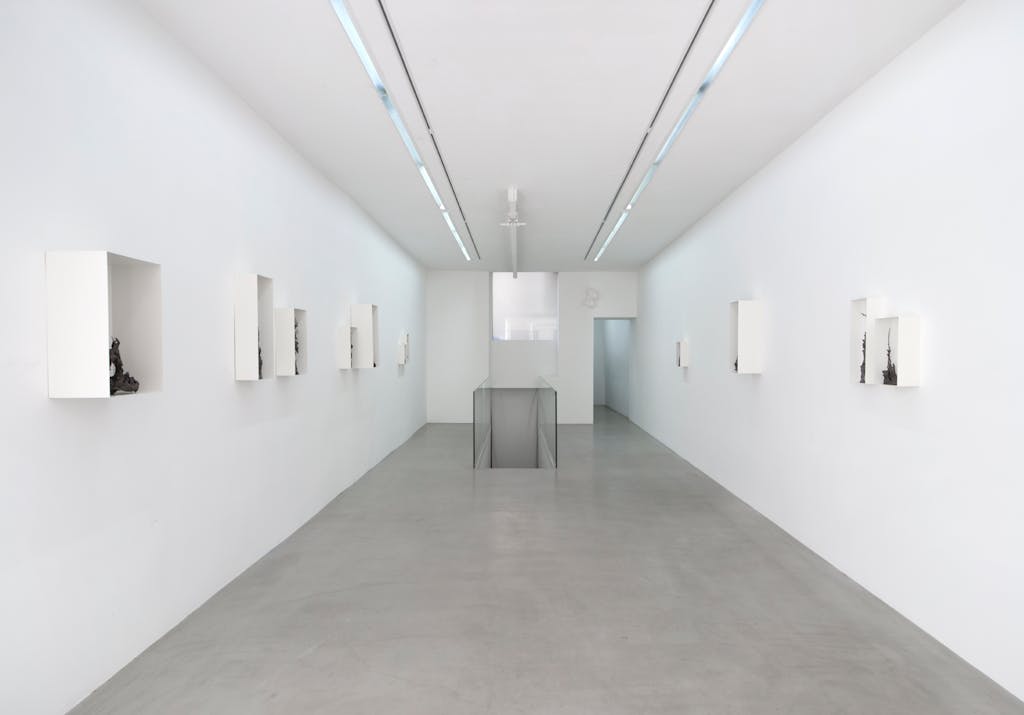 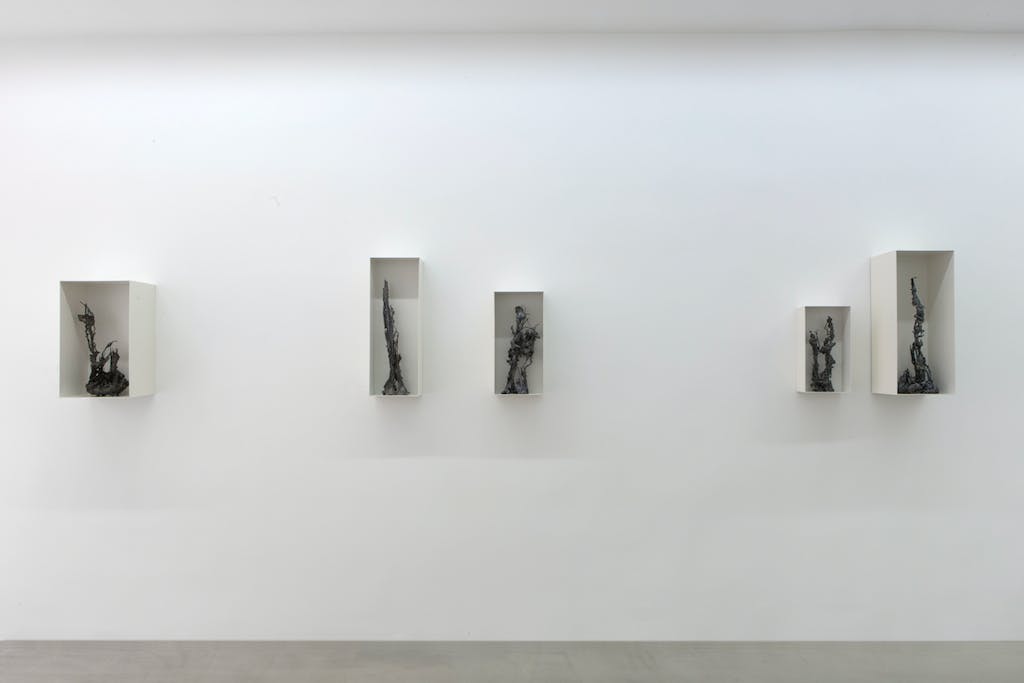 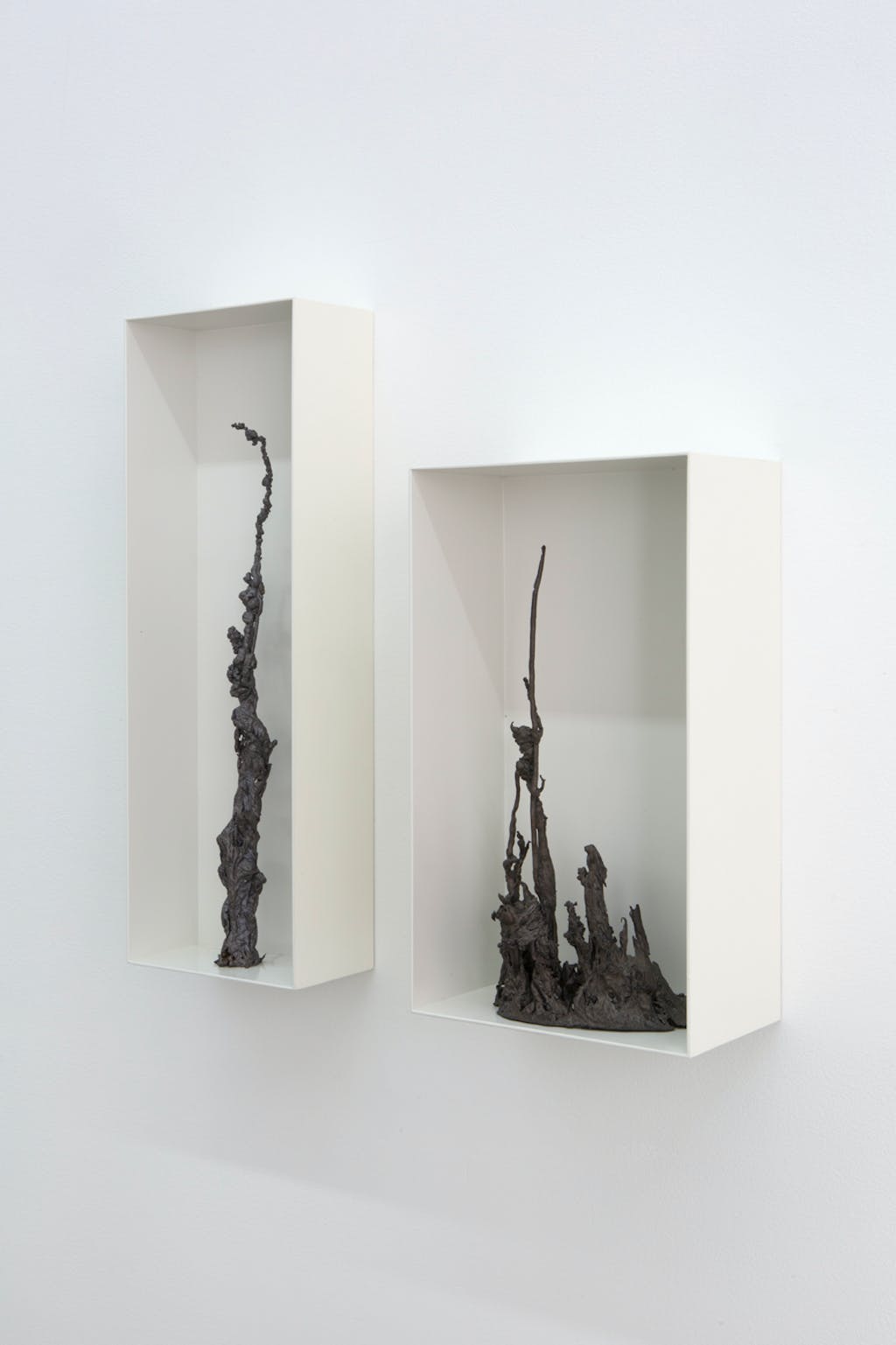 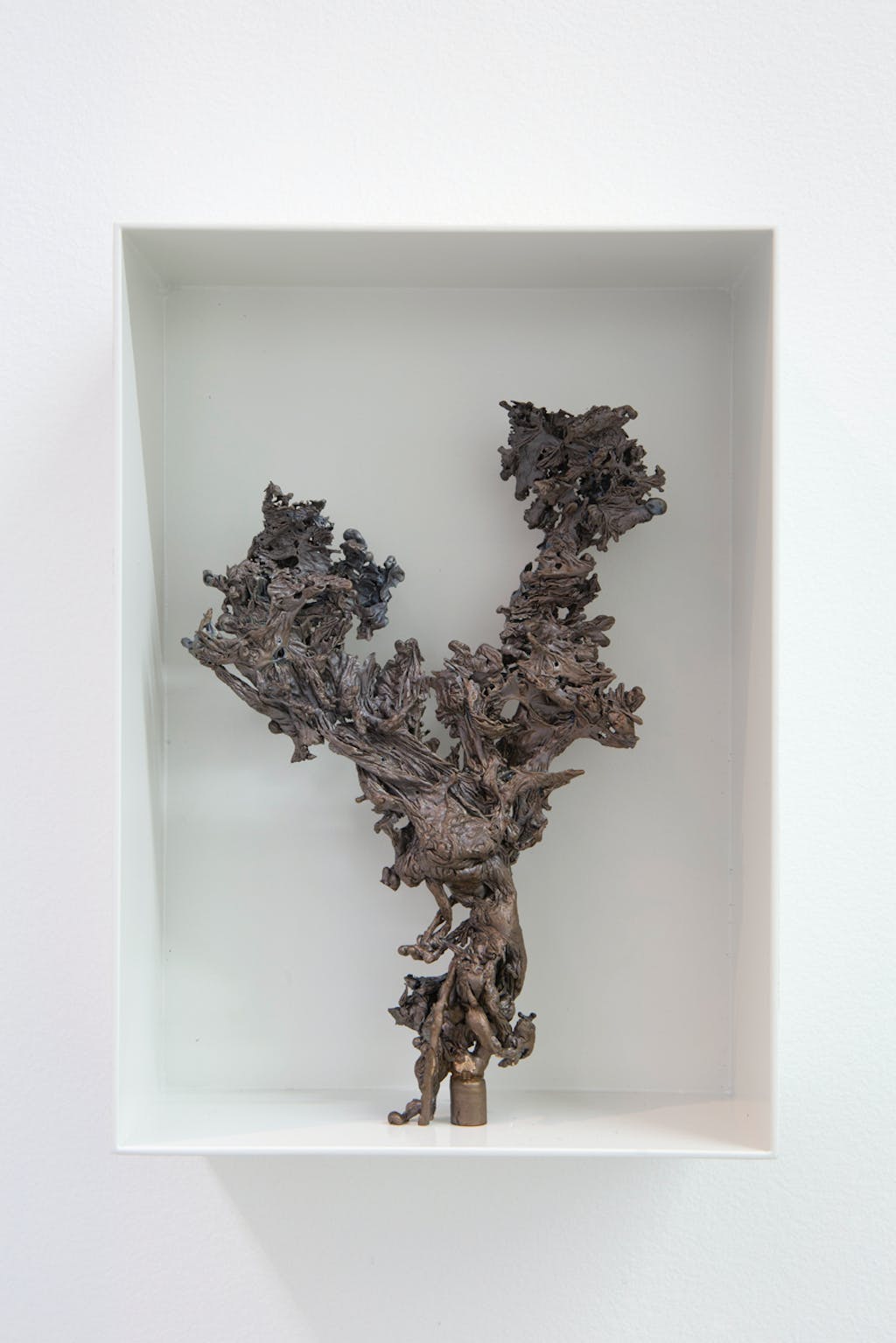 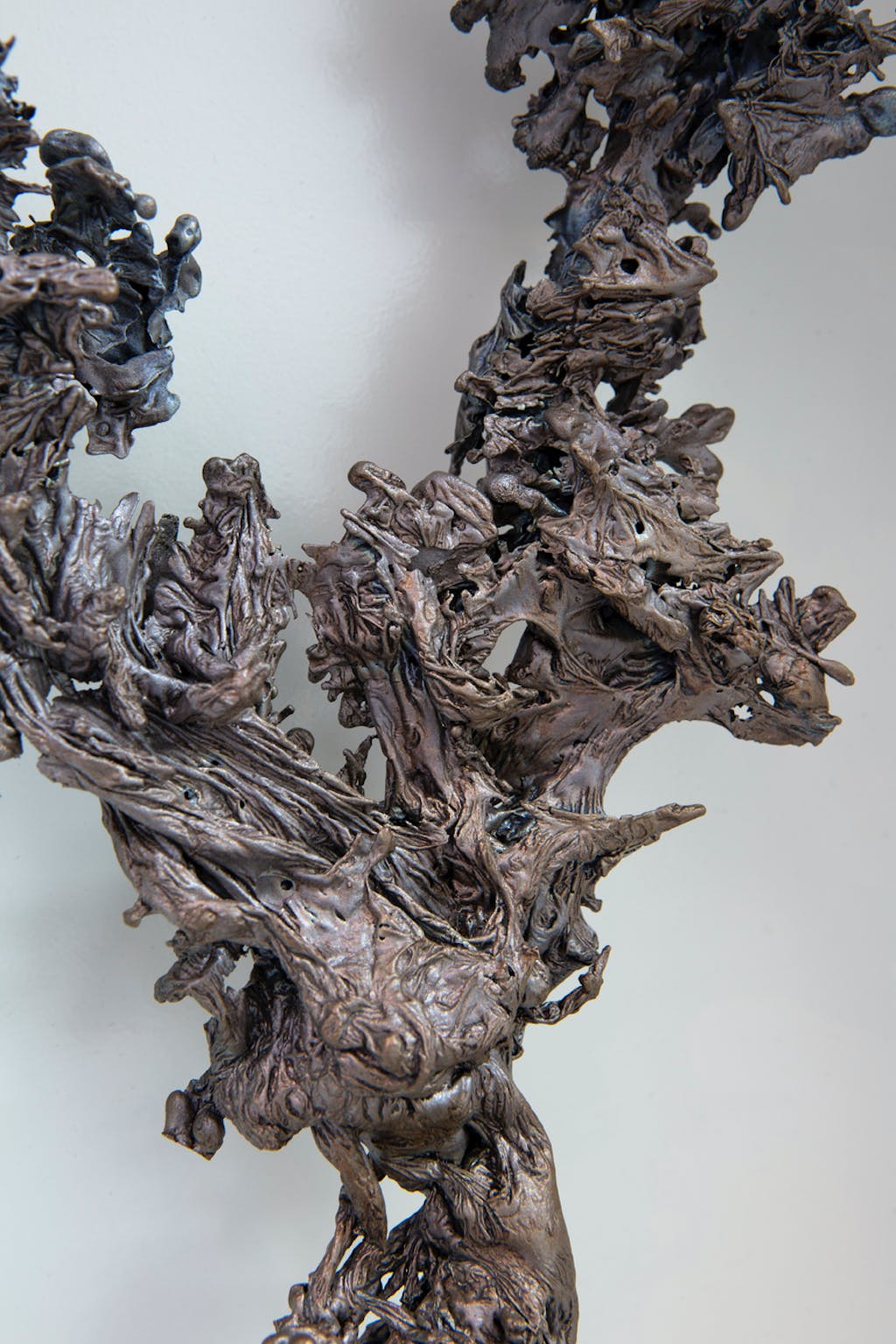 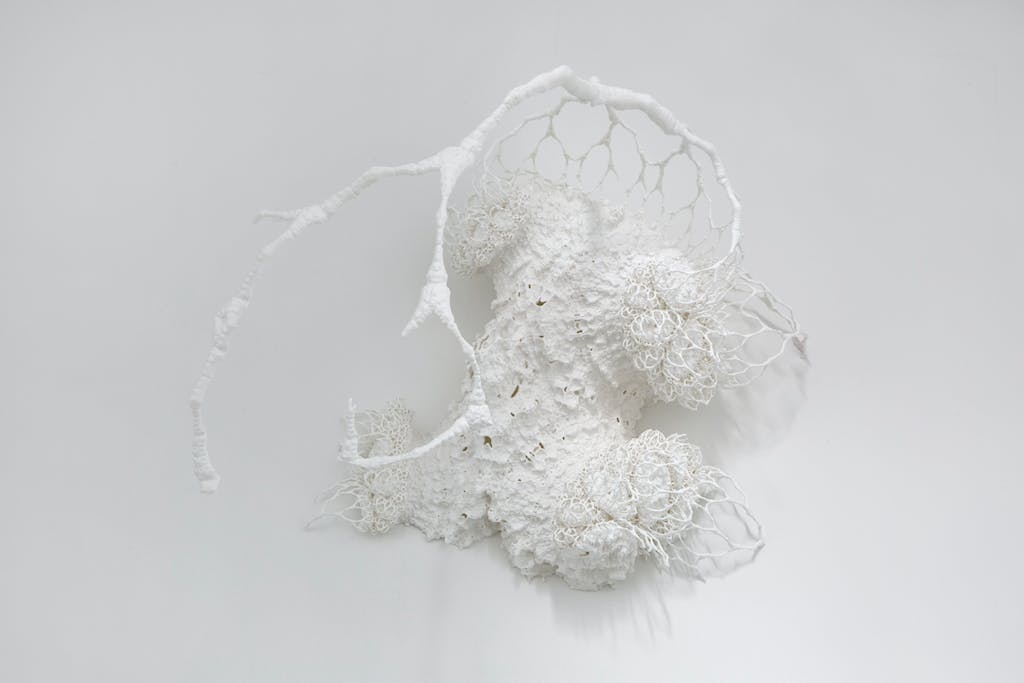 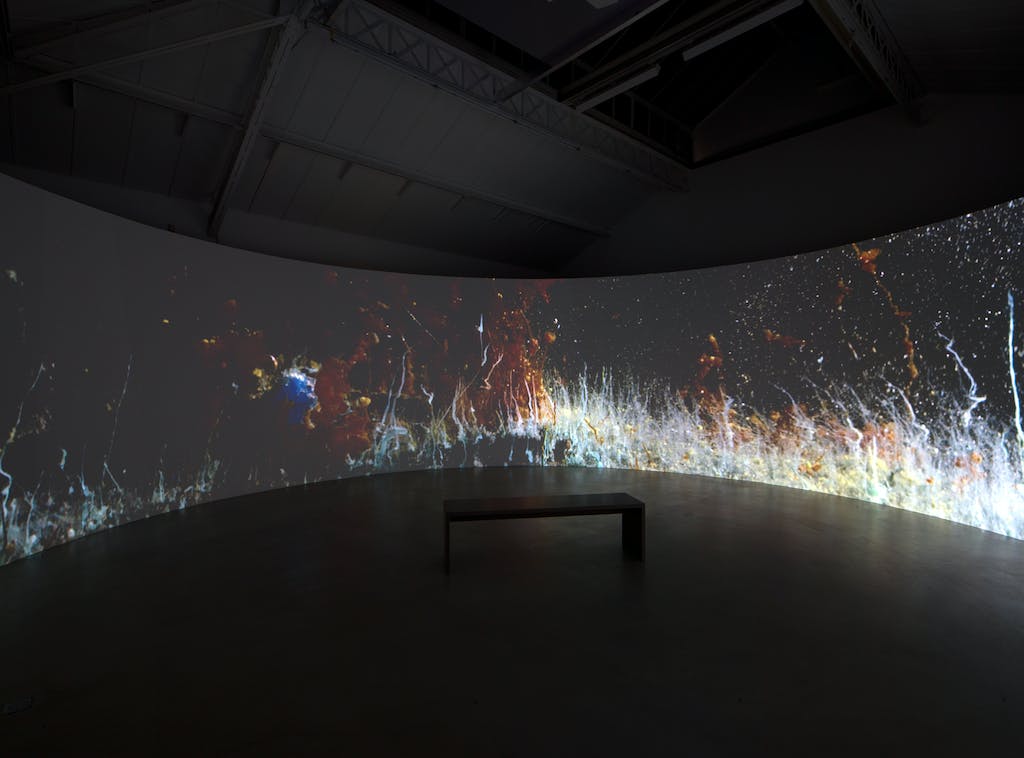 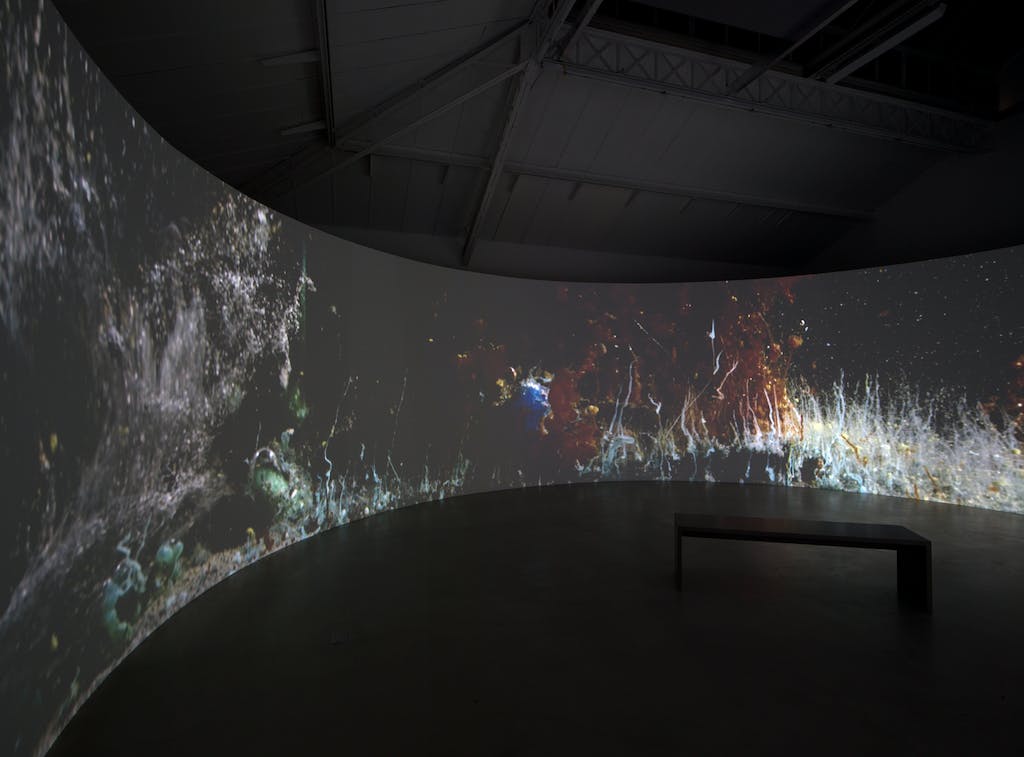 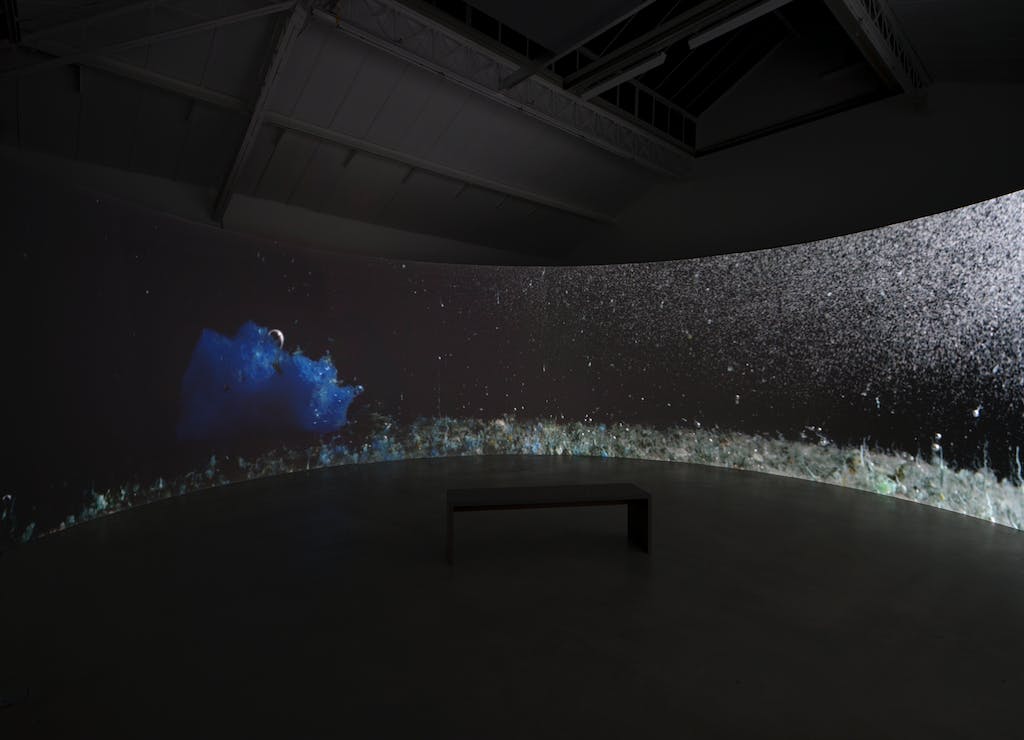